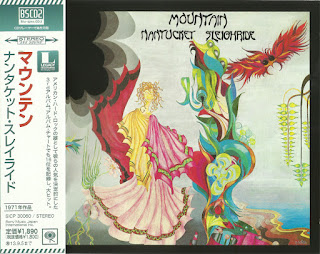 Mountain's follow-up to the very successful Climbing! is another tour-de-force of heavy rock styles, mixed this time even more effectively with an increased sense of experimentalism. Columbia/Legacy has once again put together a nice little remaster package here, with liner notes from Leslie West and Corky Laing, photos, and vibrant sound.

The hard rock sounds of "Don't Look Around" start the CD off in head-banging fashion, with West's throaty growl and rampaging guitar riffs backed by the rhythm section of Laing and Felix Pappalardi, and contrasted by the lush Mellotron notes from Steve Knight. The epic title track is an early 70's classic, featuring melodic vocals from Pappalardi, huge pounding guitar parts from West, and Knights cascading keyboards. West assaults the listener with stinging lead lines and churning rhythm guitar on the rocking "You Can't Get Away", and angry song that just screams to be played live, and "Tired Angels" features some wicked pentatonic licks (listen to this song and hear where Michael Schenker and Uli John Roth might have gotten some inspiration) and layers of organ and piano from Knight.

"The Animal Trainer and the Toad" is a funky but heavy blues-rocker, while "My Lady" has a hint of psychedelia as well as good early 70's pop. The CD ends with the metal-meets-prog of "Travellin' In The Dark (To E.M.P.)" and the electric blues of "The Great Train Robbery", highlighted by some nasty slide guitar from Leslie West. The bonus track on this reissue is a live version of "Travellin' In The Dark (To E.M.P.)", that suffers a bit from the bass and organ being way too high in the mix, but is neat to hear nevertheless.

While not the out-and-out ball-buster that Climbing! is, Nantucket Sleighride is a great follow-up, and an important album in hard rock history that cemented Mountain as a force to be reckoned with and Leslie West a bona-fide guitar hero.
by Pete Pardo 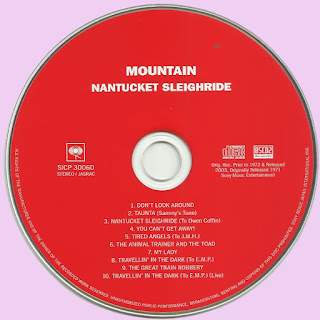