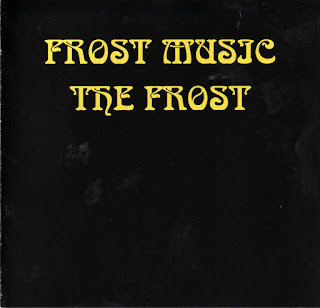 Frost was one of the most popular Michigan bands of the late 1960’s. Led by guitarist, singer, and songwriter extraordinaire, Dick Wagner, the group seemed poised to achieve national recognition with a collection of songs that were both heavy and tuneful. But they were saddled with a record company that undercut the band’s recordings with inadequate distribution and a lack of promotion that, as a result, severely hampered the band’s attempts to break big outside of Michigan.

Dick Wagner was born in the state of Iowa in 1942. After his family moved to Michigan, Dick grew up in the musical hotbed of Southeastern Michigan. Like many teens in the 50’s, he was turned on by the new sound of Rock and Roll. His love of Chuck Berry, Bo Diddley, and other early greats inspired him to pick up the guitar.

Completely self-taught, Wagner first played guitar in a Waterford, Michigan band called the Eldorados from 1962 to 1964. The band had a sax player as well as a keyboardist named Warren Keith; and they played early Motown, Rock and Roll, and Blues covers.

1964 would turn out to be a pivotal year for Dick Wagner. First, he and Warren Keith left the Eldorados and moved to Saginaw, Michigan. There, they joined forces with drummer Pete Woodman and bassist Lanny Roenicke and formed a new band called the Playboys. Covering the hits of the day, the Playboys quickly became Saginaw’s hottest band with their regular gigs at a popular club on the Saginaw River called the Village Pump.

Secondly, Wagner first heard the Beatles early in 1964 on his car radio in Saginaw. The Playboys quickly learned the Beatles’ singles and album cuts and incorporated them into their sets. Next, inspired by the songwriting of John Lennon and Paul McCartney, Dick started to write some original material. His first effort was called “Lonely & Crying Over You”. According to a 2003 interview in Review Magazine, Del Shannon’s manager expressed interest in his song, and invited Wagner to New York City for a Shannon recording session. Unfortunately, Dick’s song was not released, but it did give him the impetus to continue to write for the band.

After changing the band name to the Bossmen, the group recorded and distributed their first single, “Take A Look (My Friend)” on their own record label. The catchy Beatles-inspired song was played regularly on Saginaw-area stations like WSAM and WKNX, and became a local hit.

As a result of their recording and appearances on the emerging teen club circuit, the Bossmen began to rapidly develop a fan base around the state. Dick did most of the songwriting for the Bossmen, and he produced a batch of popular radio-friendly singles including, “Here’s Congratulations”, “Help Me Baby”, “Bad Girl” “Wait And See”, and “On The Road” during the next three years on a variety of self-owned labels including Soft, Dicto and M 'n' L.

Wagner pioneered do-it-yourself techniques in other areas as well. He commonly booked the Bossmen in local Armory Halls around the state, renting the halls for an evening and then charging admission at the door. The Bossmen also became adept at promoting themselves at local radio stations by doing on-air interviews and participating in skits with the local deejays.

In the late summer of 1966, the Bossmen became a quintet with the addition of Mark Farner. Farner, who had recently left Terry Knight & The Pack, played rhythm guitar and sang backing vocals on the biggest Bossmen single, “Baby Boy”. Farner also developed his guitar-playing skills and songwriting talents in his brief stint under Wagner’s wing. Mark wrote and performed his first song, “Heartbreaker”, while in the Bossmen, and he learned some lead guitar techniques from Dick Wagner that he put to good use when he returned to the Pack in 1967, and later with Grand Funk Railroad.

According to Wagner in the Review Magazine interview, the Bossmen broke up early in 1967 over a scandal involving drummer Pete Woodman being busted for smoking marijuana. At the time it seemed like a big deal, and the band got a lot of negative publicity that resulted in Wagner dismissing the popular drummer from the band. Things fell apart quickly after that, and Wagner looked to form a new group by joining forces with a band hailing from Alpena, Michigan, called Bobby Riggs and The Chevelles.

The band, now comprised of Wagner, drummer Riggs, bassist Jack Smolinski, and guitarist Donny Hartman, was billed as the New Bossmen at an April 15, 1967, gig at Bay City’s Band Canyon. They also performed as Dick Wagner & The Bossmen and then as Dick Wagner & The Frosts at venues throughout Michigan. This rendition of the band recorded a pair of terrific singles on the Date label in 1967, “Rainy Day” and “Sunshine”. Both were good indications as to what was to come as the band evolved into the Frost.

Dick Wagner also became involved with a number of Michigan bands at this time in the dual roles of both songwriter and producer. Wagner served as both for Saginaw’s Bells Of Rhymny on the single “She’ll Be Back/Wicked Old Witch” released on Wagner’s Dicto label in 1965. After the group had changed its name to the Cherry Slush, Wagner provided the band with its only nationally charting single when “I Cannot Stop You” reached # 119 on Billboard’s Bubbling Under The Hot 100 in 1968.

He also wrote and produced singles for two more Saginaw bands, Elation Fields and the Paupers. In addition, Wagner wrote and produced “Anytime You Want Some Lovin’/Easy Way Out”, the 2nd single by Grand Ledge’s Tonto & The Renegades. A certified Rock and Roll workaholic, Dick further managed to find the time to write “I’ve Got News For You” and “Wide Trackin’” for Mark Farner’s band, the Fabulous Pack. Several of these songs had originally been recorded by the Bossmen on Hugh “Jeep” Holland’s A-Square label out of Ann Arbor but were not released.

After failing an audition as guitarist for Blood, Sweat, And Tears in 1968, Wagner refocused on the Frost. He replaced Smolinski on bass with Gordy Garris, who had been playing in a Lansing-area band called the Beaux Jens, and the band began writing new songs.

The first big splash for the Frost in the Detroit area came at an outdoor concert in front of a crowd of over 10,000 at the Meadowbrook Theatre. The concert also featured the MC5 and the Stooges but the Frost stole the show with their combination of heavy guitars, melodic songs, and great vocals.

The Frost quickly became the talk of the Motor City and became regular performers at Detroit’s most prestigious rock venues, the Grande Ballroom and the Eastown Theater.

In the late 60’s, Michigan was a hotbed for Rock and Roll bands, and there were opportunities for the best of these groups to be signed by major recording companies. The Frost was being pursued by both Clive Davis of Columbia Records and Sam Charters at Vanguard Records. According to Wagner, Charters paid a great deal of attention to the Frost, flying in each week and wining and dining the group. Although Vanguard was mainly a Folk label, they spent the most time and effort in wooing the band, and Charters signed the Frost to his label in 1969.

The Frost went immediately into the studio and recorded the original songs they had been playing live for the last year. The resulting album was called “Frost Music” and it quickly became the # 1 LP in Michigan, selling over 50,000 units in a matter of months. Although it suffered from Sam Charters’ thin production, “Frost Music” was chock full of great guitar-driven songs and was listed among the Top 3 LPs for five consecutive weeks on Detroit’s powerful AM station WKNR. The album’s centerpiece, a combination of “Take My Hand/Mystery Man”, was a staple on Detroit’s FM stations for months. 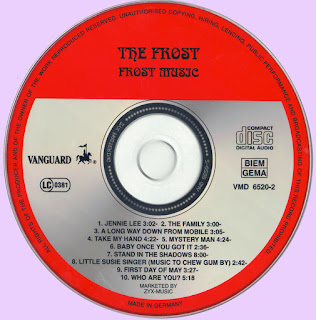