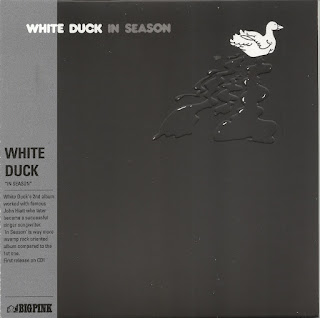 Hiatt made his first recording as a member of White Duck, a likable if unspectacular country rock band. Hiatt was on board for the band's second and final album In Season in 1972. (Hiatt did not play on White Duck's paper-thin self-titled 1971 debut record). The four band members (Hiatt, Don Kloetzke, Mario Friedel, and Paul Tabet) each contribute songs as singers and songwriters. Hiatt's two songs are the record's high points. "You Caught Me Laughin' " sounds like the type of song that would turn up on one of Hiatt's first two solo albums; the other one, "Sail Away", sounds almost like vintage Hiatt. "Sail Away" would be deserving of inclusion on a Hiatt anthology.
The songs contributed by Mario Friedel are almost as good as Hiatt's. Nearly half of the songs are written and sung by Don Kloetzke (who has a white duck sitting on his lap in the back cover photo); the quality of his contributions is inconsistent. Kloetzke shines on "Thank You" and "A Girl Who", but he overindulges on "Bull Island Boogie" and "Looney Tune", two oddball novelty songs in which Hiatt is not a credited player.
Overall, In Season makes for very pleasant listening, and should be regarded as more than just a curiosity piece for Hiatt's fans. The music on this record alternately resembles that of the Band and the Flying Burrito Brothers, but is more upbeat than either.
RareBird 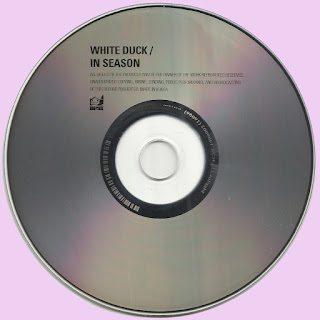