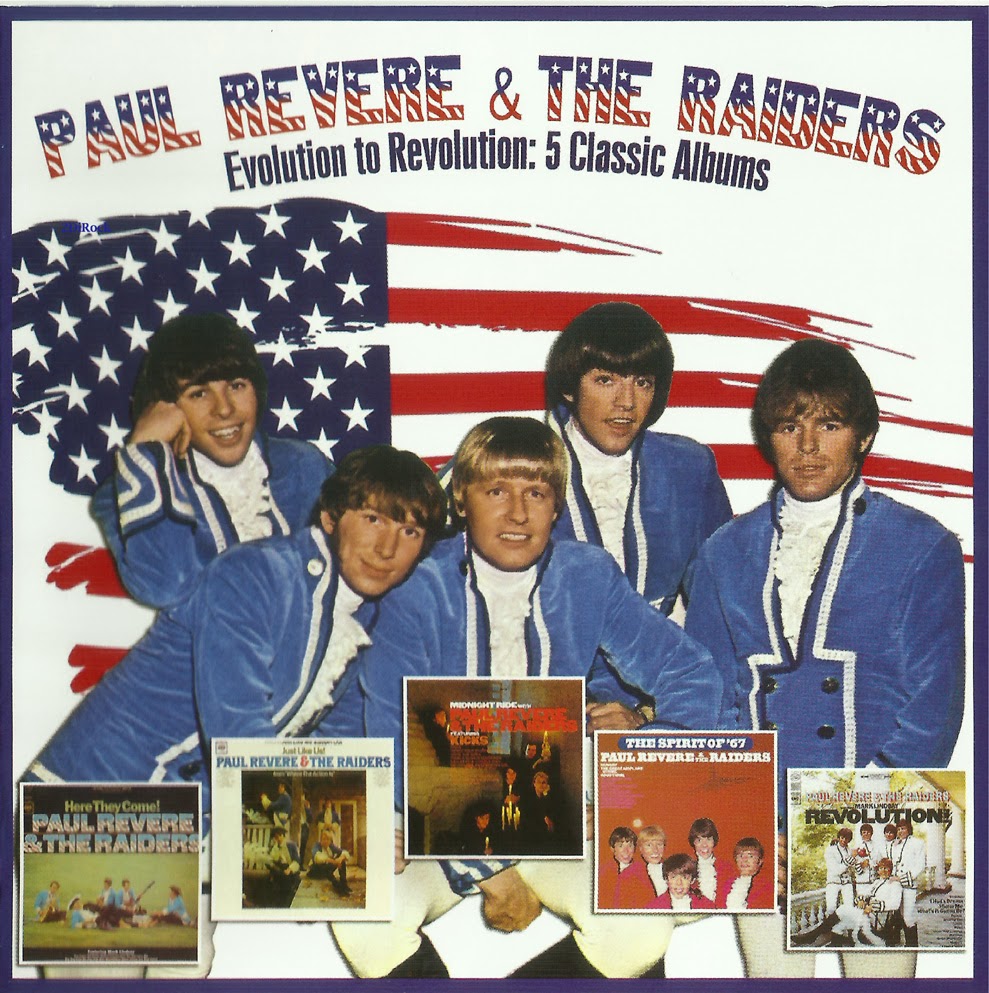 Though Paul Revere and the Raiders was a quintessentially American band, it’s the Australian label Raven Records that’s bringing the first Raiders-related release of 2013.  The group’s first five Columbia Records albums, originally released between 1965 and 1967, are being compiled on two discs as Evolution to Revolution: 5 Classic Albums 1965-1967.  Available on March 12, Evolution contains the entirety of Here They Come! (1965), Just like Us! (1965), Midnight Ride (1966), The Spirit of ‘67 (1966) and Revolution! (1967).

Led by Paul Revere (born Paul Revere Dick) on piano and organ, and Mark Lindsay on vocals and saxophone, The Raiders were doubtless one of the most successful bands to come out of the fertile Pacific Northwest music scene.  It was a bumpy start; the group first rose to prominence in 1963 on the strength of their rendition of Richard Berry’s controversial rocker “Louie, Louie.”  But The Kingsmen got to it around the same time, recording it in the very same Portland, Oregon studio as Revere’s band.  It’s lost to time as to which version was released first, but one fact is clear:

The Kingsmen’s version reached No. 2 on the charts, while The Raiders’ version stalled at No. 103. You can’t keep a good band down, though, and 1965’s “Steppin’ Out,” co-written by Revere and Lindsay and produced by Terry Melcher, set the wheels in motion for the group’s biggest successes.  The Raiders were selected by Dick Clark to appear on his ABC after-school program, Where the Action Is!, bringing to television as well as records their blend of proto-punk garage rock, strong R&B roots, and irresistible pop sensibility.

The band – also including Phil “Fang” Volk, Mike “Smitty” Smith and Drake Levin in its heyday - memorably defied the British invasion, going so far as to make Revolutionary War costumes (inspired by Revere’s name, natch) their eye-catching attire.   After “Steppin’ Out” (included on 1965’s sophomore Columbia album Just Like Us!) and its No. 65 chart placement, the hits just kept on coming for Paul, Mark and the band.  “Just Like Me” topped its predecessor at No. 11, with a prominent organ part keeping the band true to its garage sound.

Much as he helped foment the folk-rock sound with The Byrds, producer Terry Melcher surely deserves much of the credit for shaping the sonic signature of Paul Revere and the Raiders, although he never boxed them into one style.  Brill Building mainstays Barry Mann and Cynthia Weil were tapped, and delivered to the Raiders their most enduring hit: 1966’s No. 4 single “Kicks,” inspired by their real-life observation of a friend in thrall to drugs.  “Kicks” was included on 1966’s Midnight Ride (spread across both discs of the new Raven set due to CD time constraints) along with another signature song, Tommy Boyce and Bobby Hart’s snarling “I’m Not Your Steppin’ Stone.”  The Monkees had the hit version just a few months after the release of Midnight Ride, but The Raiders had the original.

The band again turned to Mann and Weil’s songbook for “Hungry” (No. 6), which appeared on The Spirit of ’67 (actually released in November 1966) but sax-playing frontman Mark Lindsay was blossoming as a songwriter in his own right. “Good Thing,” co-written with their producer Terry Melcher, was another Top 5 smash for Paul Revere and the Raiders from the same Spirit album, with a dreamy (Beach Boys-inspired?) harmony interlude and an overall more sophisticated sound. Lindsay and Melcher’s “Him or Me – What’s It Gonna Be?” (No. 5) from 1967’s Revolution! even added a country flavor to the guitar-heavy framework.

Though Revolution! is the final album contained in the new Raven set, it was far from the end of Paul Revere and the Raiders.  Personnel changes ensued, and the band name was eventually shortened simply to The Raiders.  More albums followed for Columbia through 1972, including one pair already collected on CD as a two-fer from Raven in 2009, 1970’s Collage and 1971’s Indian Reservation, and label swansong Country Wine (1972, reissued by Raven in 2011).  “Indian Reservation” became one of the group’s most enduring songs, climbing all the way to No. 1.

Raven promises a 12-page booklet with new liner notes for Evolution to Revolution.  All of these albums have appeared on CD in the past, though some are particularly difficult to find and rather expensive secondhand (especially Midnight Ride and Revolution!).  Though none of the bonus tracks from previous editions have been carried over, Raven’s new set is an affordable way to obtain these out-of-print albums on CD.
by Joe Marchese 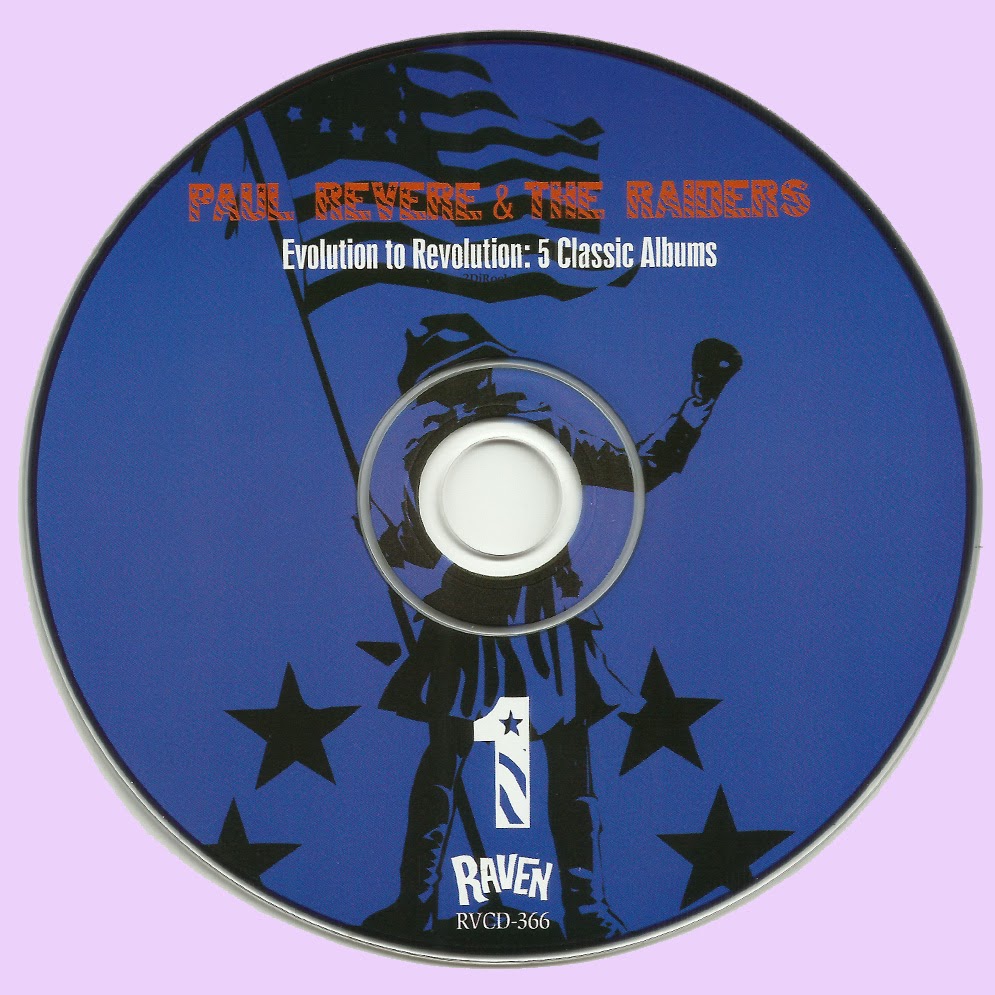 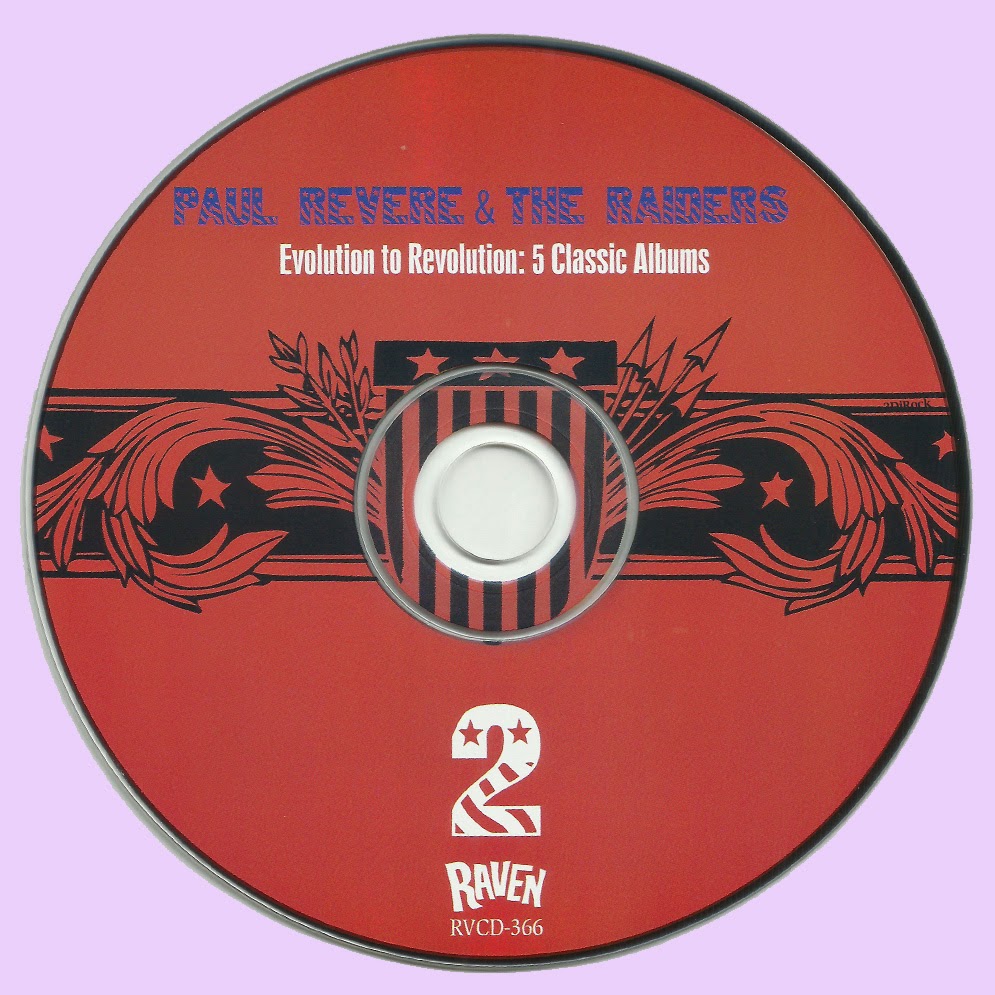 Free Text
Text Host
Posted by Marios at 2:52 AM 14 comments: