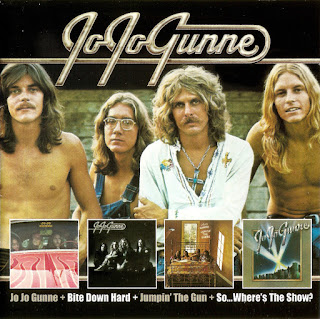 Born out of boogie rock, Spirit (leader Jay Ferguson and bassist Mark Andes had split the group), and a double shot of testosterone, Jo Jo Gunne are best remembered for their urgent hit "Run Run Run" and their third effort's politically incorrect album cover (you could tastefully call that woman "Rubenesque" if it wasn't for the pig pictured with her).

Still, they deserve to be more than a footnote in American rock, and while this two-disc round-up of their four original albums (that's everything but the reunion, re-recording, and totally fan club worthy Big Chain from 2005) proves the group weren't strong enough to keep up with that hectic, early-'70s release schedule (all of this is from 1972 - 1974) there's plenty of fun to be had. Greasy, early Doobie Brothers-like fun on one hand (tight harmonies, solid, showy musicianship, and boogie all the way) and naughty, macho, brash, and bolder-than-you're-used-to fun on the other ("Shake That Fat," "High School Drool," "S'n'M Blvd," and "Big Busted Bombshell from Bermuda" are all as nasty as they want to be, but are like the Hudson Brothers in their cheeky, vaudeville-esque delivery).

Their debut album was rich, their sophomore release was looser for the better and the worse, and while their third effort lacked strong songwriting, their fourth and final was a serious step in the right direction, right before Ferguson moved on to a solo career with the hit "Thunder Island." Dotted amongst it all are some forgotten gems, so check out the boogie reggae woman named "Babylon," the prog rock epic titled "Rhoda," and the squawky, Talkbox rocker "She Said Alright," which sounds like Peter Frampton flying high on Cialis. A welcome set for fans of the band and addicts of the era, plus no matter how cool you spray-paint it, you ain't gonna get the "old lady" to "check out" the van without this one.
by David Jeffries 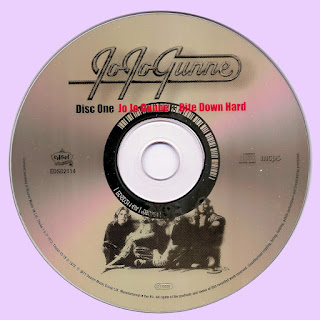 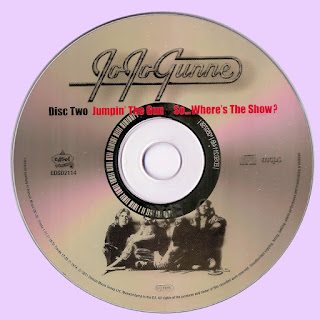 Free Text
the Free Text
Posted by Marios at 10:50 AM 7 comments: