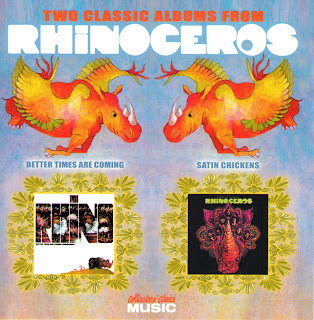 January 1969. Rhinoceros, an assembly of talented musicians brought together by Elektra producer Paul Rothchild as a "Project Supergroup", had released their self-titled debut album which, despite warm critical response, only peaked at #115 on the Billboard charts. However, the band was gaining a reputation as one of the finest live acts of the day, coming across as a "heavier" version of The Band, crossed with a Booker T & The MG's/Three Dog Night/Springfield vibe.

At a residency at The Scene nightclub in New York City, the cracks in the "supergroup's foundation were beginning to show. Bassist Jerry Penrod left the band in dramatic fashion, to be briefly replaced by 17-year old Stevie Weis, Danny's brother, who was soon replaced by Finley's cousin Peter Hodgson, who had been earmarked for the nascent group but was passed over before sessions commenced for the debut album. The group then fired their original record producer Paul Rothchild, who had helped put together and nurture the band during their first year.

Rhinoceros was on a slippery slope; but with their brilliance still intact... In early 1969, the band returned from New York to Elektra's LA. studio. The result was, in many ways, the final 'real' Rhinoceros album, Satin Chickens. Despite the excellent finished product, lead singer John Finley revealed the album was quite different from the original concept as devised by Rothchild. "It was going to be an album of singles," says Finley.

While the actual track listing was never finalized, Finley says that it would most likely have included original material like Alan Gerber's "It's The Same Thing," but in a radically different form. "'It's The Same Thing' would have been recorded at a faster tempo, so it would have been more like soul music," says Finley. "Paul was going for singles. He was also going to get outside originals, real R&B, soul songs and then two or three covers in addition to the internally generated material.

Do original arrangements on covers. But the band fired him before he could tell us." Apparently frustrated by Rothchild's evidently autocratic authority in the studio, the band chose Elektra A&R head David Anderle as producer. Anderle had a strong rapport with the band, as he, along with Rothchild and Frazier Mohawk (Barry Friedmanl, had helped assemble Rhinoceros in mid-late 1967. "Paul had his own concept of how to do things," says Alan Gerber today, "and obviously it was very successful for him. I had no problem working with Paul, aside from the fact that with Paul, he had the final word, and you had to go with what the end result was..." Like its predecessor, Satin Chickens was cut, for the most part, live in the studio.

Anderle had recently completed Judy Collins' majestic Who Knows Where The Time Goes in similar fashion at the same studio, with marvellous results. Despite personnel problems and the change in producer, Satin is, in this writer's opinion, nearly as potent a statement as their debut. A long season of touring had paid great dividends, and this is clearly illustrated in the band's near-telepathic communication. In the best possible way, several of the songs sound as though they were written and recorded spontaneously in the studio. Indeed, according to Alan Gerber, "Some of the funky grooves were created - or at least enhanced - in the studio, and some of the songs may have been finished in the studio." This is readily evident in the Finley/Weis collaborations, "Monkee Man" and "Top Of The Ladder."

Built on funky guitar riffs by Weis, the tunes begin slowly, as if the players are feeling their way through the groove...but soon enough, there is a collective authority that becomes blue-eyed hard rock/soul at its highest. Finley's gospelinspired wailing, Gerber and Fonfara's superlative keyboard work, the rock-solid rhythm section – particularly Billy Mundi's drumming - and Weis and Hastings' staglike guitar dueling all coalesce into powerful, spontaneous and commanding performances that are brimming with conviction.

Pianist Alan Gerber, who - along with some of the other band members - occasionally felt that some of his best material was either not cut or left in the can, shines on brightly with his Procol Harum-esque masterpiece, "Find My Hand." Alan remembers a couple of particularly appreciative fans. "I remember I sang that at The Scene in New York," he recalls, "and Steve Winwood and Odetta were sitting right in front of me - literally eight feet away; it was a very small club. I was really into it, really singin' it.. .and after we finished, they got up and hugged me. That was such a great feeling."

The song's soulful, melancholy lyric, agile construction along with its stately, rolling power is startling, and buttressed by Michael Fonfara's commanding Hammond playing, it easily remains one of the groups' finest moments. "Michael and I really hit it off," says Gerber. "We came from different musical schools, but we very quickly came together and locked into something wonderful. He complemented and added extraordinary things to my songs." However, despite such weighty material, the album is home to some whimsical moments, such as the instrumental "Sugerfoot Rag," which finds Weis and Hastings pickin' and grinnin' at blinding speed.

The instrumental was another in a line of signature tunes for the band, such as Fonfara's "Funk Butt" and Weis and Fonfara's "Booker T & The MG's-on-speed" instrumental "Apricot Brandy" from the debut, which nearly made the Top 40. Satin Chickens was recorded amidst mutinous changes in management, production and internal friction within the band. It would, in fact, be the last to be cut by anything closely resembling the band's original line-up. Things were about to change radically again, as you will soon see.

However, despite (or perhaps because of) this chaos, the resulting album showcases a handful of LA.'s brightest musicians playing at the peak of their abilities with an undeniable sense of intuition, authority and above all, soul. Along with their debut, this just may be one of the great lost masterpieces of late 60s rock & roll.

Despite the excellence of Satin Chickens, several key Rhinoceros members jumped ship following a tour to support the album. Co-lead guitarist Doug Hastings was the first to bail, followed in quick succession by pianist/singer/songwriter Alan Gerber and drummer Billy Mundi. According to Gerber - who had written some of the band's finest material (some of it unreleased, such as "A Fine Day (For Loving You)," "A Sin To Take Life" and "Horace The Rhino"), "The original concept of the group was to do something different and really creative. And it was different, but it ended up being a funky R&B/ rock band... it started out to be something much different, much more experimental; and that's really the reason I left.

Also gone was producer David Anderle, and in his chair was Guy Draper, who, oddly enough, ended up writing almost half of the Better Times material. Duke Edwards nearly dominates the album with his gritty soul growl, which is strongly reminiscent of Lester Chambers. The album in fact does sound like a different band, which it really was. There are a few fleeting flashes of the real Rhino, such as the melancholic and intense Weis/Finley collaboration, "Somewhere", which was apparently a leftover from the band's 1968 debut.

The song's gentle, spacey verses are juxtaposed by some startling, near-orchestral crescendos and water sound effects. The title cut may be the album's finest moment, combining a Chambers Brothers feel along with the instantly recognizable vocal harmony of Finley, Weis' funk guitar and Fonfara's wailing Hammond. New members Leishman and Edwards came up with some fine material, such as the moody, anti-war album closer, "Rain Child," and "Old Age," which features a blistering guitar passage that could easily be called "fusion." "That's Larry Leishman," comments Danny Weis. "It was a flurry or cluster of notes and phrases, and very bluesy.

I thought he was a very fine guitar player, and he had a real nice feel. Doug (Hastings) had his own style, and was very unorthodox, but it worked, but Larry was really funky. I liked playing with him very much." Organist Michael Fonfara also shines brightly throughout the album, particularly on the instrumental "Insanity" and a sing-along party breakdown aptly titled "Let's Party." Better Times would be the end of the road for the group. "My guess would be that there was some contractual obligation to do that record," Weis speculates. "By the time Better Times happened, the enthusiasm was less than up there, and we were kind of forced to do certain things that we wouldn't normally do as a band." Despite this, the record, as you will hear, does indeed have some brilliant - albeit fleeting - moments. 35 years later, the band's legacy is remarkable.

"I think it's amazing," comments Alan Gerber today. "Wherever I go, all over Canada, the United States and Europe, people know and respect Rhinoceros. I'm very surprised, because the amount of records that the group sold was not that great; maybe 200,000 total, but people know and respect the band all over the world." "It reiterates the fact that over the years I thought we had a pretty strong underground following," concludes Weis. "A lot of people knew about us that I didn't think knew about us, though we didn't sell a lot of records...still, we had quite a following.

I'm pleasantly finding that a lot of people still remember us to this day. I listen to the stuff now, and I still like a lot of it. It was a good band; it wasn't necessarily a perfectly 'tight' band; but that band always had a lot of heart, and that remained a constant throughout with most of the players. I would love to be able to have that kind of feeling again with a group."
by Matthew Greenwald 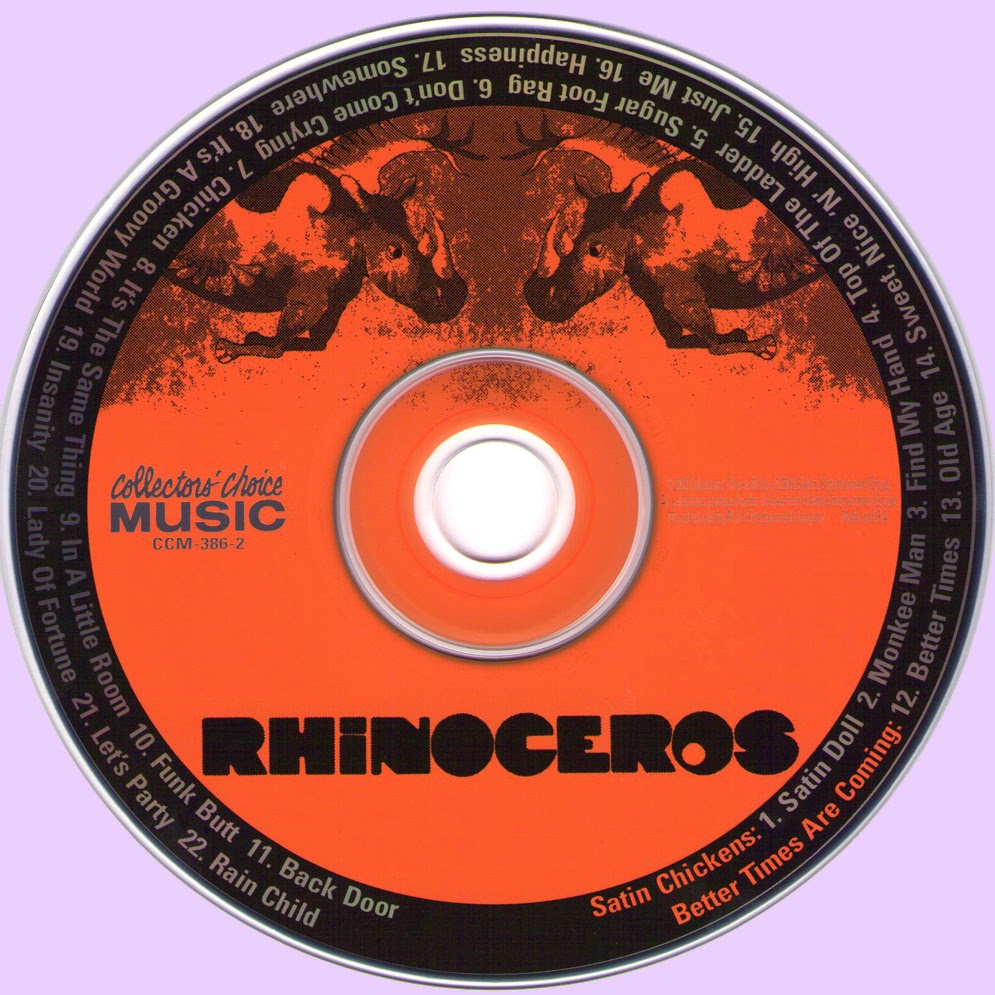