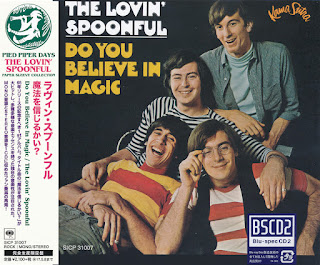 The Lovin' Spoonful. Once dubbed America's answer to the Beatles... "I think that was a fair comment," says bassist Steve Boone. "The Beatles started out as a skiffle band, whereas we were initially a jug band. The styles were very similar. From there, the Beatles became very diverse, as indeed did we. I can see why people put us in the same category as them, and it's ahuge honour."

The New Yorkers very nearly became The Monkees as well... "The producers of the TV show wanted us as their first choice for the role. We even had a presentation made to us about what they were planning. But by this time, the Spoonful had already a hit of our own, and if we'd gone along with the idea, it would have meant a name change to The Monkees.

We weren't prepared to do it, and so the offer was turned down. But I wonder if that was a mistake!" The Lovin' Spoonful, the band whom many now regard as being among the most influential musicians of their time, a band whose first seven singles all hit the Top Ten in the US - remarkable indeed. As is Boone's own story, of how serendipity turned him from his expected career path and into a rock star.

"In 1964 I played in my brother Skip's band out in Long Island; it was nothing grand - merely some fun. I was expecting to go to college to study engineering. I took time out, though, in September of that year to go travel with a friend around Europe, the idea being to get into studying in January 1965.

So, we came to England, got a couple of bikes and hit the road. In the strange way that life happens, we met a couple of Canadian girls just outside of Barcelona, and spent two weeks or so with them. I mention this, because in January 2008, The Lovin' Spoonful toured Canada - and they came along to one of the shows!

It was the first time I'd seen them in 43 years!" By December 1964, Boone was back home - and found I that his brother was now living in Greenwich Village, a thriving musical and creative 'colony' within New York, and it was Skip Boone who encouraged Steve to meet two young men with whom he would change the musical landscape.

"He told me that I should meet these guys John Sebastian and Zal Yanovsky, reckoning they were really cool. So, I went along, took my bass, and we jammed for ages on songs the three of us knew by the likes of Chuck Berry. Now, John and Zal were in the process of starting a band.

They already had a producer (Erik Jacobsen) and management, but were looking for a bassist. They offered me the job. Although I was ready to go back and study, I decided to take a one semester break, and give this a go. I told them, 'OK, I'll give it six months. If we haven't had any success by then, I'm giving it up'."

Boone also brought with him drummer Jan Kotner, an old friend. Now called The Lovin' Spoonful (a name inspired by a line in the song 'Coffee Blues' by Mississippi John Hurt; the idea was suggested to the four by jug band master Fritz Richmond), the band made their live debut in January 1965 at the famed Night Owl Cafe in the village. It was a...disaster!

"I have to admit we were terrible. Joe Merra, the owner, suggested we should go away and rehearse a lot more, and we took that opportunity to make one line-up change. To be honest, Jan never quite fitted what we were doing. He was three or four years older than the rest of us, and I don't think his attitude suited either. My brother recommended this guy with whom he'd been working, which is how Joe Butler joined us in February 1965."

At this juncture, the Spoonful were rehearsing at the Hotel Albert in Greenwich Village, an exotically named establishment that was no more than a skid row flophouse (to use the vernacular). Bands rehearsed and lived there; The Lovin' Spoonful shared space with the Paul Butterfield Blues Band and one or two talents who ended up in the Mamas & The Papas (Yanovsky had previously been in a band called The Mugwumps with Cass Elliot).

"The hotel was just eight blocks from the Night Owl. But we were so poor that, when we played there for the first time with the new line-up, we couldn't afford the cab fare. So we borrowed a barrow and wheeled our equipment down the road." The second debut at the venue was a much bigger success. The band were on their way, and now began to gain a loyal and regular following.

"There were also a lot of music business types who'd come along to check us out, including Phil Spector. Now, we were all big fans of the man, and he was definitely interested in working with us, which was very exciting. But in the end we decided against taking up his offer. The reason? Our management wondered whether Spector's approach would suit us. We loved his famous "Wall Of Sound" production, but we didn't need anything so elaborate. A shoestring of sound suited us better!"

Erik Jacobsen, who had previously been the banjo player in the oddly-named band The Knob Licker Upper 10,000 (they released two albums), was now making a name for himself as a hot producer on the Greenwich Village scene. He already knew Yanovsky from Mugwumps days, and now put the Spoonful into the studio to do a demo, the aim being to get record deal sorted out. But the process was far from painless.

"We cut four songs with Erik, but every label turned us down! The trouble was that at the time radio stations in America were only interested in playing British bands. If you didn't have that sort of accent, then you weren't expected to sell records. So, like the Beatles in their early days, we couldn't get anyone to pick us up."

Eventually, it was one song, 'Do You Believe In Magic' (written by Sebastian), that tipped the balance. Kama Sutra Records, which had only just been launched, took the plunge and signed the band - one of the first artists on their roster.

Inevitably, Jacobsen produced the debut album, 'Do You Believe In Magic', which was to prove something of a watershed release. Not only did it propel the band to significant status commercially - reaching Number 32 in the States, as well as delivering the band's first hit singles - but also gave momentum to a process which altered the very nature of the way everyone perceived albums.."Until then, everyone saw albums no more than two or three singles, plus a lot of covers thrown together," says Boone.

"Not much thought ever went into them, because labels were too busy promoting singles. But then the Beatles put out 'Rubber Soul' and people's attitudes began to shift. Now, everyone saw that album could have a life and credibility of their own. I suppose it was the 'Sgt. Pepper..,' album in 1967 that most see as the real turning point in this respect.

But I'd mark out 'Rubber Soul' two years earlier as the beginnings of the process." The'.. .Magic' record you have here also played its part, because the four refused to be formulaic. The key lies in the diversity of the songs and music. While one can certainly hear the Spoonful's jug band origins, there's an excellent sense of pacing, and the roots of the folk rock stylings they helped to pioneer are definitely in evidence.

"What makes us stand out for me are two important things: firstly there's John's mouth harp playing, which gave the music an extra dimension, and Zal had a really odd, expressive manner on guitar. It was so unusual that, at times, he made it sound like a piano. Put these two together, and it's no wonder we stood apart from so many others."

The Lovin' Spoonful also refused to go along with the usual practices of the day. A lot of artists back then didn't play on their own records, with producers and labels preferring to use the more practised approach of top class session stars, in order to make the records as slick and professional as possible. But that was never going to be the case here.

"It was a very different world back in the '60s," agrees Boone. "Producers were kings, and the record companies were the kingmakers. So a lot of what was recorded then would be about the producer, and the artists were almost irrelevant. We insisted not only on playing on our albums, but also in arranging the songs and having a hands-on input. That did make us stand apart, but also ensured what you heard was what we really sounded like.

"The other thing that made us different was that we never fitted our songs into a pattern. When you had a big hit single, the labels wanted you to repeat, repeat, repeat. It's still the same today, but we refused to do that. So The Lovin' Spoonful were a band who grew all the time."

From a distance of more than four decades, how does Boone think 'Do You Believe In Magic' has weathered? "I still listen to what we did, and marvel at the music. Not in an arrogant fashion, but it brings home the point that we were four musicians who came from such diverse backgrounds in terms of influence, yet we gelled. Each one of us brought our own musical passions into the mix, but we had respect for one another and what we could achieve together.

"I think the album had a big effect on music. Nowadays when we tour (the band split in 1968; their induction into the Rock 'N' Roll Hall Of Fame in 2000 led to a re-union, albeit without Sebastian and Yanovsky - the tatter died in 2002), we come across loads of musicians who say that they were inspired by us in the '60s. Unfortunately, what we've never gotten was critical approval. This band were, and are, not media darlings."

For those who've heard 'Do You Believe In Magic' before, this is a chance to re-visit an old friend, and perhaps discover depths and breadths which have never been obvious before. To those who haven't heard the album yet, you're about to embark on one of the truty great musical journeys of the 1960s - in fact, of all time
by Malcolm Dome 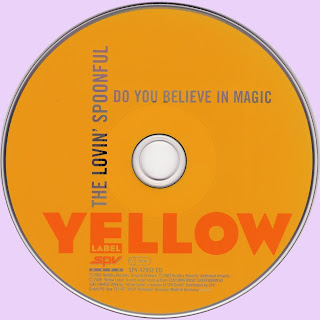