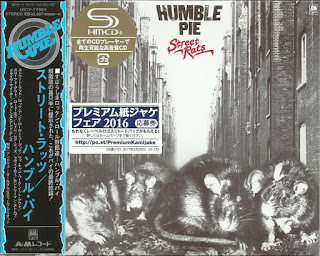 Humble Pie endured their share of turbulent times early in the band's existence, overcoming the early departure of guitarist Peter Frampton through a steady diet of regular album releases and a seemingly never-ending series of tours arranged by manager Dee Anthony. By the mid-'70s, they'd attained a measure of commercial success, sending a string of LPs into the American Top 40 and notching a handful of hit singles along the way -- but they were also flat broke, tired of life on the road, and coming apart at the seams.

The band's eighth studio LP, Street Rats, captures Humble Pie mid-implosion; in fact, according to the group's members, it wasn't even supposed to be a Humble Pie record at all. Bandleader Steve Marriott, burned out after one too many tours, wanted to take a break from making the band his top priority, and although their label, A&M Records, was impatient for more Pie product, he opted instead to begin work on three LPs -- a solo album, a duo record with the group's bassist Greg Ridley, and a proper Pie release. Unsurprisingly, between this scattershot creative approach and the musicians' overall burnout, the results weren't exactly coherent.

"Everything was so self-destructive at that point," pointed out drummer Jerry Shirley years later in Dan Muise's book, Gallagher, Marriott, Derringer & Trower: Their Lives and Music. "Everybody was doing everything in a dozen different directions and nothing was getting done." Adding to the band's dire financial straits was their ironclad contract with Anthony, who, as Shirley put it, "had us truly locked up ... it was a nightmare of a time."

Marriott, who ultimately ended up writing or co-writing five of the 11 tracks on Street Rats, dealt with the drama through overindulgence. "Steve's way of dealing with things was buying an ounce of coke every other day and burying himself in his studio," Shirley continued. "When you've got nothing but carte blanche studio time and all the coke in the world, all you do is record." Quantity doesn't necessarily constitute quality, however, especially when you're too addled to make sound decisions about the stuff coming out of the speakers, and so it was with the Street Rats sessions. "There were great bits here and there," argued Shirley, "but there was no one focus on one record."

Ridley, who described himself and Marriott in Muise's book as "two lonely souls," looked back on that period as a sort of sleepless musical haze. "We'd just sit there for almost a week at a time without sleeping," he recalled. "He and I would just go through different things. He'd say, 'Let's try this chord,' and then we'd go off from that."

Eventually, A&M execs grew tired of footing the bill for what appeared to be an increasingly aimless trio of projects and mandated that Marriott and the band bring in a producer to help shepherd the sessions. Their choice, flamboyant former Rolling Stones manager Andrew Loog Oldham, had name value -- and experience with wrangling drugged-out musicians -- but he wasn't really the rough hand that Humble Pie needed at that point. Although he ended up doing a lot of work salvaging the recordings, Street Rats -- and the band itself -- was probably already a lost cause before he even walked through the door of the studio.

"The rot had long since set in," admitted Shirley. "He tried, he failed, let's put it like that. There was all kinds of nonsense going on."

Not that the band were the only parties guilty of nonsense. Insistent on releasing a Humble Pie album and steadfastly disinterested in Marriott's other plans, the label ultimately commandeered the tapes, demanding that an LP's worth of tracks from the period later dubbed the Scrubbers Sessions be cobbled together into the "band's" next effort. Under duress and fairly shady circumstances, Street Rats was born.

In the months after the album's February 1975 release date, Marriott and his bandmates would publicly disavow the results, with Marriott going so far as to insist that the label "stole" the tapes for the title track, which was played with people outside the band and had "nothing to do" with Humble Pie. Prior to the album's completion, however, the members of the group were more resigned than angry.

"No one cared. No one was talking. We'd already broken up," shrugged Shirley. "We'd agreed to allow the album to be released and to do a farewell tour. Other than that we were pretty much done."

And that's essentially the way it went down for Humble Pie during the Street Rats period. When a last-ditch effort to get Marriott and Ridley to clean up and redouble their commitment to the group failed -- along with an attempt to lure Who manager Bill Curbishley into their camp and ditch Anthony -- Shirley and guitarist Clem Clempson felt there was no choice but to walk away.

While Street Rats fared poorly in comparison to its predecessors, peaking at an unimpressive No. 100 on the Billboard albums chart, there was still plenty of demand for Humble Pie -- something that became abundantly clear during the farewell tour, which drew healthy crowds even if Shirley and Clempson were playing with one foot out the door. And although Marriott and Shirley would revive the band name in later years, both together and apart, the group's glory years were firmly behind them. After Marriott died in a house fire in April of 1991, all hopes for any kind of real reunion were permanently quashed.

Although it's easy to paint Humble Pie's story as another tragic tale of bad behavior and financial tomfoolery splitting up a once-promising band, not all of the group's former members agreed with that point of view. Years later, Clempson gave Muise a more philosophical take on what drove the Pie apart, speculating that the lineup might have dissolved no matter what.

"There are hundreds of Humble Pies and they may all have their personal reasons that they attribute to their downfall," he mused. "But it's usually just because they have a creative period and they get popular. They get some hit songs and everybody wants to hear them. And they just fail to live up to it for whatever reasons. The pressures of touring, the internal conflicts of egos, believing their own hype -- all these things are contributing factors."
by Jeff Giles, February 13, 2015 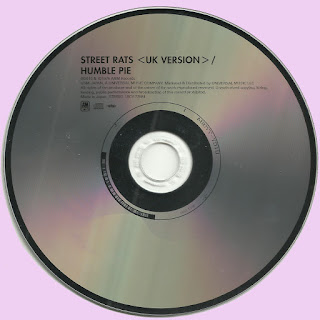 Free Text
Just Paste
Posted by Marios at 8:26 AM 7 comments: