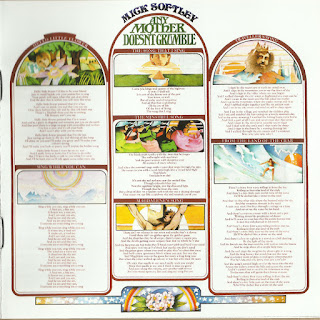 After many years lurking in a musical hinterland, Mick Softley's quite wonderful 'Any Mother Doesn't Grumble' has been released into the wild once again and it is quite clearly the work of an untamed and erratic free spirit who refused to conform to any record company's desire to crank out another Bob Dylan clone. On this album, Softley mixed a heady brew of folk, jazz, blues, country and rock together and sprinkled his idiosyncratic lyrics throughout the creation to craft the most powerful work of a three-album deal with CBS Records between 1970-73. It is a masterclass from a time when creative freedom in the studio was often not only accepted but encouraged however the road to its release was tempestuous and twisting.

From an early age it was apparent the Michael 'Mick' Softley was not going to accept the stifling grip of post-war conformity. Born to Irish parents in 1941, he was raised in South Woodford close to Epping Forest. Although he received a religious education at a Jesuit College in North London the priesthood was not a calling and, at the age of eighteen, Mick had already kissed his factor)' job goodbye and embarked on a motorcycle trip to Spain followed by a period of hitch-hiking in France, While residing above a bookshop in Paris, Mick was living the beatnik dream in the presence of writers such as William Burroughs and Gregory Corso but it was the ex-pat music community that really drew his attention and where he heard music from the likes of Sandy Denny and Ramblin' Jack Elliott first hand. It was on the streets of France's capital city that Mick served his musical apprenticeship busking with Raymond 'Wizz' Jones and Clive Palmer (Incredible String Band / C.O.B.).

On returning to England in the early 1960s as a fully-fledged and well travelled bohemian, Mick started a folk club in the tiny basement of The Spinning Wheel restaurant in Old Town, Hemel Hempstead. It was a rowdy but creative space (Mick coaxed a youthful but very shy Maddy Prior into action here, long before her days in Steeleye Span) but also a health and safety nightmare with no fire escape and the police eventually closed it down.

Mick began playing at The Cock in St Albans, a legendary hangout for beatniks, hippies and musicians looking for a break from the big smoke. It was here that he began teaching cross-picking guitar techniques to a youthful Donovan Leitch before the Glaswegian singer / songwriter was snapped up by Pye Records. Donovan would later cover Mick's songs 'The War Drags On' and 'Goldwatch Blues' and it was through his connections that led Mick to the release of his first single with Immediate Records, 'I'm So Confused / She's My Girl' (1965), and then his debut alburn 'Songs For Swingin' Survivors' (1965) for Columbia Records. Neither seemed to bring Mick much joy and his first dealings with the record 'biz' were bruising' encounters that left him fighting an uphill battle to regain the copyright to many of his songs.

Mick then shot off in a more Psychedelic Rock direction as Mick Softley and the Summer Suns, a group who produced one single for CBS Records, 'Am I The Red One / That's Not My Kind Of Love' (1966). Soon he was back on the road without a record deal and once again indulging in a nomadic lifestyle. In between travelling Mick formed a band called Soft Cloud Loud Earth with Donovan sidekick Keith 'Mac' Macleod. The band soon disintegrated into simply Mick and Mac as the duo Soft Cloud and as the 1970s appeared on the horizon Mick was off on a solo trip once again thanks to a new record deal with CBS.

The first fruits of this deal were the albums 'Sunrise' (1970) followed by 'Street Singer' (1971). On both albums Mick moved well away from the straightforward folk delivery that he had employed on his debut album and gleefully threw everything into the mix. The Eastern influence of tabla and sitar nestled alongside evangelical choruses, tantric chants, acid-tinged folk and more mainstream singer-songwriter compositions. Both albums were widely diverse and this theme was to continue across Mick's third album for CBS.

The recording of 'Any Mother Doesn't Grumble' took place at Richard Branson's residential studio The Manor in Oxfordshire and at Sound Techniques - a recording facility built within an old dairy in Chelsea and a popular creative hub for folk royalty such as Steeleye Span, Pentangle and John Martyn. In the studio once again with Mick was a hugely talented line-up. American guitarist Jerry Donahue was one of the key players who put the rock in 'folk rock' and he had already worked with Fotheringay and just become a recent addition to Fairport Convention. Alongside Jerry were his Fotheringay bandmates Gerry Conway on drums and bassist Pat Donaldson. Added to this exotic mix was percussionist Barry De Souza (Curved Air) and Lyn Dobson (Manfred Mann / Soft Machine) on saxophone, flute and harmonica.

In the producer's chair and tasked with blending together this experienced and eclectic bunch was Tony Cox, a talented keyboard player who had played with Sandy Denny and Mike Heron and produced albums for Caravan and cult acid-folkies Trees. Cox had also lent his talents to Softley's previous two CBS albums so they were almost three years into a solid working partnership.

Right from the start it is apparent that Any Mother Doesn't Grumble' will be a wild ride as the first track, the gentle ballad 'The Song That I Sing,' blends seamlessly into a hypnotic crescendo of sleazy sax and wailing guitar before drawing to a gentle close. The windswept acoustic theme continues on 'Hello Little Flower' but there are a number of different avenues that the album wanders down - wrong-footing musical travellers who think they know what to expect next. 'I'm So Confused' is a protest anthem throwback to Mick's early days, 'From The Land of the Crab' has a rootsy, country feel and each new track offers something different and original. It's hard to say whether CBS execs of the time would have been settling back with a warm, satisfied glow at being part of the creation of this rich tapestry or were tearing their hair out wondering how to market an album of such musical diversity.

The whole package places the artist centre stage and all of the songs were Softley originals. His lyrics even got unusual prominence on both the front and back of the album cover which also featured illustrations from Ian Beck - the talented artist who created the artwork for Elton John's 'Goodbye Yellow Brick Road' album. This decision to feature lyrics so prominently was an unusual one and particularly bold considering the words to 'Magdalene's Song' deal fairly heavily with drug abuse, whores and factory 'hell holes'.

CBS played on Mick's travelling roots with press ads that stated "20,000 miles of tyres and a lot of bootwear went into this album" and they gave the album a final push into the public arena. By the time of the album's release Mick had already appeared on two CBS sampler albums, 'Together' (1971) and 'Rock Buster' (1972), and a promo single featuring two tracks from the album, 'Lady Willow' / 'From The Land Of The Crab', was also released. Despite gigs, festivals and TV appearances across Europe, including support slots on tours with Steve Miller and Mott The Hoople, 'Any Mother Doesn't Grumble' failed to capture a mainstream audience and Softley drifted off into the roving lifestyle once again. At one point he was living in a van purchased with his CBS advance money and the vehicle even featured on the front cover artwork of his 'Sunrise' album.

While drifting across Europe he released two further LPs on the' Zurich-based independent label Doll Records, 'Capital' (1976) and 'Mensa' (1978), and his final creation was a cassette only album 'War Memorials' (1985). Back in the UK in the early 1980s, Mick fell victim to new laws targeting 'New Age' travellers and he settled in Northern Ireland in 1984 where he continued to make sporadic appearances at the Belfast Folk Festival. Now living in Enniskillen it would be wonderful if this album could provide a retrospective resurge in interest for an artist who has wilfully worn his own trail through the British musical landscape. Way back in 1972, Disc and Music Echo Magazine probably captured the essence of this unique recording most succinctly when they reviewed the album and stated: "Listening to it, one almost feels an intruder into the man's soul".
by Craig Brackenridge, 2016 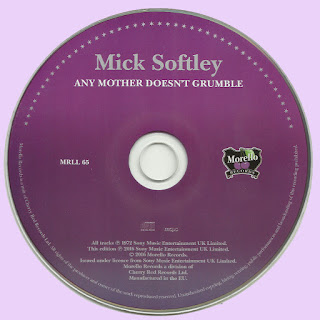