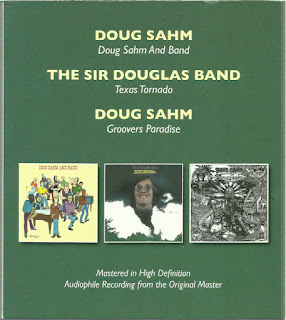 Doug Sahm began his solo career in 1972, after the Sir Douglas Quintet finished its contract with Smash/Mercury and after Atlantic Records co-owner/producer Jerry Wexler convinced him to sign to his label. Wexler gave the Texas maverick the chance to cut a star-studded, big-budget album, shuffling him off to New York where Wexler and Arif Mardin helmed a series of sessions with an ever-revolving cast of musicians featuring Bob Dylan, Dr. John, David "Fathead" Newman, David Bromberg, and Flaco Jimenez, in addition to such Sir Doug stalwarts as Augie Meyers and the rhythm section of bassist Jack Barber and drummer George Rains (all but the latter were in the last incarnation of the Quintet, raising the question of whether the group was indeed finished or not, but such is the nature of Sahm's discography). This group cut a lot of material, which was whittled down to the 12-track album Doug Sahm and Band, released in early 1973.

At the time, the record received a push from the label and was generally disparaged because of those very all-stars on whose back it was sold, but the years have been kind indeed to the album, and it stands among Sahm's best. Indeed, the heart of the album is not at all far removed from those latter-day Sir Douglas Quintet albums on Mercury, which isn't much of a stretch since Sahm never really strayed from his signature blend of rock & roll, blues, country, and Tejano, but the bigger band and bigger production give the music a different feel -- one that's as loose as the best Quintet material, but off-handedly accomplished and slyly freewheeling. Original reviews noted that there was an overtly country direction on And Band, but that's not really true on an album that has Western swing and rambling country-rock like "Blues Stay Away from Me" and the anthemic "(Is Anybody Going To) San Antone" jutting up against pure blues in "Your Friends" and "Papa Ain't Salty," let alone loose-limbed rockers like "Dealer's Blues" and "I Get Off" or the skipping Tejano "Poison Love," fueled by Jimenez's addictive accordion.

These are all convincing arguments that the larger band allowed Sahm to indulge in all of his passions, to the extent of devoting full tracks to each of his favorite sounds -- something that was a bit different than the Quintet records, which usually mixed it all up so it was impossible to tell where one influence ended and another began. That's still true on And Band -- for instance, witness the brilliant cover of Willie Nelson's "Me and Paul," a country song goosed by soulful horns and delivered in a delirious drawl from Sir Doug -- but much of the album finds that signature Sahm sprawl being punctuated by style-specific detours where Sahm seizes the opportunity to stretch out as much as his guests seize the opportunity to jam with this American musical visionary.

These are all characteristics of a jam session, which these sessions essentially were -- after all, on this album he only penned three out of the 12 songs -- but relying on covers also points out how Doug Sahm sounds so much like himself, he makes other people's tunes sound as if he wrote them himself. Again, that's something that was true throughout his career, but here it is in sharper relief than most of his records due to the nature of the sessions. And while it's arguable whether this is better than latter-day Sir Douglas Quintet albums -- or such mid-'70s records as Groover's Paradise or Texas Rock for Country Rollers for that matter -- there's no question that this is music that is vividly, excitedly alive and captures Sahm at a peak. It's pretty much irresistible.

Doug Sahm recorded much of his second Atlantic album, Texas Tornado, around the release of his first, Doug Sahm and Band, and even used outtakes from those sessions to fill out this 11-track record, so it would seem that the two records would be nearly identical. But, as they say, appearances can be deceiving, and the two albums have fairly distinct characters, at least within the frame of Sahm's music, where all his music is instantly identifiable. The biggest difference between the two records is that a good eight of the 11 songs are Doug Sahm originals -- an inversion of And Band, which relied on covers -- and most of those are produced by Sahm himself, not Jerry Wexler and Arif Mardin, who helmed its predecessor, and he gives the record a feel that's considerably more streamlined than the cheerfully rambling And Band, while giving it a little grit by more or less concentrating on rock 'n' roll.

That the exceptions arrive early and are as disarming as the "Summer Wind"-styled, Sinatra-esque crooner "Someday" and lite bossa nova groover "Blue Horizon" -- two detours that make more sense in the broader context of the complete Atlantic recordings showcased on Rhino Handmade's double-disc set The Genuine Texas Groover but are bewildering here -- gives the record an off-kilter feel that may cause some listeners to underrate what is not just a typically excellent Sahm set, but one of his strongest selections of songs. Apart from the barnstorming opener, "San Francisco FM Blues," perhaps the best attempt at shoehorning Sahm's untamed Texan feel to AOR, these all come on the dynamite second side that houses the anthemic title track, as perfect an encapsulation of his Tex-Mex fusion as they come, the rampaging roadhouse rocker "Juan Mendoza," one of his best salutes to Latin culture in the 2-step "Chicano," an excellent Sir Douglas-styled groover in "Hard Way," and the gloriously breezy "Nitty Gritty," one of his very best songs (not to mention one of his best performances, highlighted by his call to right-hand man Augie Meyers before his organ solo).

Unlike Doug Sahm and Band, Texas Tornado is billed to the Sir Doug Band, which is not quite the Sir Douglas Quintet, but with all of his usual gang in place -- not just Meyers but bassist Jack Barber, drummer George Rains, and saxophonist Rocky Morales, among others -- it essentially is no different than a Sir Douglas Quintet album, but really that's splitting hairs since the album is simply first-rate Doug Sahm. It may be recorded toward the end of his peak period -- after this, he turned out two other arguable classics before settling into a comfortably enjoyable groove that he rode out for the rest of his life -- but it still captures him at an undeniable peak and it's undeniably irresistible.
by Stephen Thomas Erlewine

Anyone who finds hippies irritating might want to throw this record across the room -- and that's a good review right there, since it has been long established via intense scientific study that music which somehow motivates people to throw records across the room is usually quite good. No exception to this rule here, as fans of Doug Sahm often choose this as a personal favorite, while it is also one of the better side projects of the Creedence Clearwater Revival rhythm section. If Sahm was writing the review himself in 1974, he would have no doubt described the whole thing as some kind of "trip"; after all, this expression is used three times alone on the back cover of this album, actually less than one might expect considering the stoned-out nature of the accompanying comics. These black-and-white illustrations by Kelly Fitzgerald are a great part of the record's enduring charm, but the music itself is deeper than the coolie hippie vibe.

This is simply a great roots rock album, and like much of Sahm's work it is loaded with complex details as well as loving interplay between the musicians. These tracks indicate a mastery of many basic forms such as blues, rhythm & blues, norteño, country, and Cajun and the players always seem to be probing beyond this to find something new. Creedence Clearwater Revival drummer Doug Clifford produced as well as played, and did a superior job, irrigating the proceedings with a range of available Sahm streams like some kind of master gardener. The use of horns is excellent, not only providing plenty of punch in the arrangements but memorable effects such as the spooky baritone sax solo on "Just Groove Me." A large section of the sonic spread is always reserved for Sahm's lush guitar playing, including lots of rock, country, and blues licks, while bassist Stu Cook sometimes adds additional guitar, expertly mocking the patented hypnotic John Fogerty sound for an effect that is not unlike Sahm sitting in on a Creedence album. Of course, the range of that classic '60s and '70s rock group seems quite limited compared to Sahm, who whips off an expert version of the Tex-Mex instrumental "La Cacahueta," the only track here which he did not compose himself.

The well-crafted yet daringly personal and unembarrassed songs include haunting country-influenced ballads such as "Her Dream Man Never Came," as well as really top-notch examples of good old rock & roll, the hilarious "For the Sake of Rock 'N' Roll" and the bewitchingly cooking "Devil Heart." The second side of the original vinyl is one of this artist's most perfect set of songs. The final track, "Catch Me in the Morning," is one of several on this album that benefits from a long, satisfying arrangement -- hardly the kind of simple dirt that is often tossed off the shovel in the quest for roots rock. The band tends to move through these pieces with confidence, as if already expecting to have lost the attention of the simpletons in the crowd. At the same time, there are those listeners who will find it hard to believe a simple song, let alone such a magnum opus, could be created from the almost nonexistent message of this song. "Call me in the morning, I am too tired to talk right now," is just about all this song says, and it is one of the marvels of Sahm that he is able to parlay a near-operatic sense of importance into such a typical part of daily life. Giving him an instrumental credit for being a "dreamer" -- nicely enough, it comes right after the credit for bajo sexto -- is one of the most appropriate details, or "trips," on Groover's Paradise.
by Eugene Chadbourne 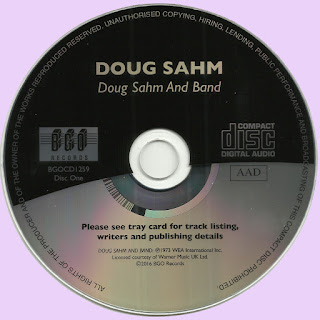 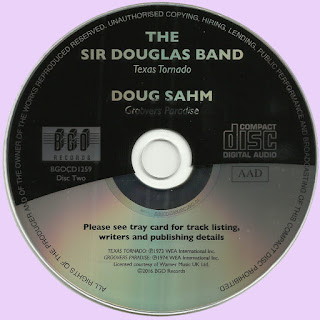 Free Text
Text Host
Posted by Marios at 10:23 AM 7 comments: