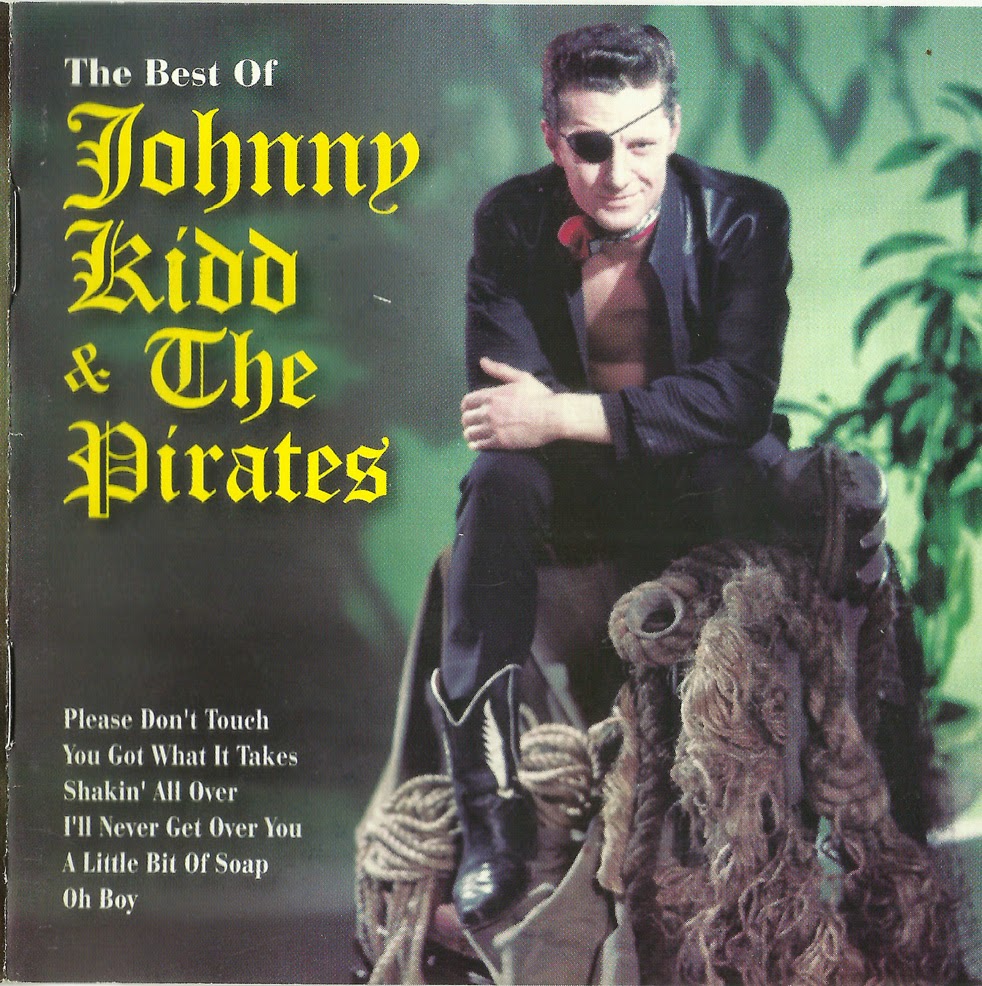 It may surprise you to know that The Beatles were not the first British rock act to top the chart with one of their own compositions – that honour goes to Johnny Kidd & The Pirates, whose No. 1 hit, 'Shakin' All Over", is also the earliest British penned rock song to ever reach the US Top 20. Born Frederick Allbert Heath in WillesdenWillesden, North London on November 23 1935, Johnny was the youngest of Margaret and Ernest Heath's three children. He attended Wesley Road Secondary Modern School before going on to Willesden Technical College, and first became interested in music when an uncle gave him a banjo for his birthday.

In 1956, together with some friends, he formed a skiffle group, who at various times were known as Bats Heath & The Vampires, The Frantic- Four, and The Five Nutters Skiffle Group. The group fared well in a handful of talent shows, which led to an appearance on the BBC radio show Skiffle Club and performances at the No.l skiffle venue. The '2 I's coffee bar in Soho.

When the skiffle train ran out of steam, the group had a few name changes before settling on Freddie Heath & The Nutters. Unlike many contemporary British rockers, Johnny also wrote songs. In 1959, George Martin produced the duo The Bachelors (Steve Keen & Rikki Gabin - no connection to the later Irish trio) singing 'Please Don't Touch', which Kidd composed with his manager Guy Robinson. Simultaneously Johnny was ottered a contract with another EMI label, HMV, and on April 18, 1959, the group recorded their version of that song with upand- coming producer Peter Sullivan, later famous for his work with acts like Tom Jones and Engelbert Humperdinck. It was while recording this track (it took 28 takes), and its equally exciting, written-inthe- studio, b-side 'Growl' , that the group learned that they would now be known as Johnny Kidd & The Pirates - a decision they presumed had been taken by either Sullivan or Robinson.

'Please Don't Touch' had more of a raw rock'n'roll sound than any other British record at the time, and their performance of it on BBC" radio's Saturday Club helped push it into the Top 20. Most unusually for a UK rock song it was covered in the USA by Chico Holliday (on RCA), and 22 years later revisited the UK charts by heavy metal heroes Motorhead and Girlschool. Johnny, who wore an eye patch and calf length cowboy boots on stage to enhance his pirate image, followed this hit with a beat rendition of the First World War favourite 'If You Were The Only Girl In The World' - recorded just days after the death of its composer George Meyer. The group then returned to the chart with a cover version of 'You Got What It Takes' penned by future Motown owner Berry Gordy Jr.

At this time the Pirates had reduced to a trio consisting of Alan Caddy (lead guitar) Brian Gregg (bass), and Clem Cattini (drums). It was this line-up, with the addition of noted session guitarist Joe Moretti, that recorded their next single. The A-side was intended to be their rockin' revival of the 1925 favorite 'Yes Sir, That's My Baby', hut it was the "throwaway" b-side that went down in rock'n'roll history. They penned 'Shakin' All Over' in just six minutes at Chas McDevitt's Freight Train coftee bar in Soho the day before going into the studio on Friday the 13th May I960. Legend has it that the track, which features Moretti's playing the chilling guitar figure and classic solo, was recorded in just two takes. Johnny recalled "When we saw a girl who was a real sizzler we used to say that she gave us 'quivers down the membranes'. It was this that inspired me to write the song".

EMI instantly realised the track's potential and made it the a-side. The group launched it on Jack Good's TV show Wham!. It charted immediately and seven weeks later in August 1960 replaced Cliff Richard's 'Please Don't Tease' at No. 1. Incidentally, Cliff later recorded the song as did The Who, The Swinging Blue Jeans, Normie Rowe (who took it to the top in Australia) and Canada's Guess Who (who took it into the US Top 2O). Johnny's final I960 release was the haunting 'Restless' which narrowly missed the Top 2O. He returned to the Hit Parade the following year with the R&B song 'Linda Lu' but the next release 'Please Don't Bring Me Down', which owed more than a little to 'Shakin' All Over', failed to chart. It was soon after this that Brian, Alan and Clem thought thev were leaving a sinking ship and quit the Pirates - they would soon all be part of the Tornados, who had a transatlantic No. 1 with "Telstar' in 1962. Johnny's final release of 1961 was the 'Fever' flavoured 'Hurry On Back To Love', on which the Pirates were replaced by the Mike Sanimes Singers. It also sold relatively few copies.

By 1962 there was a new line-up of Pirates; Johnny Spence (bass), Frank Farley (drums) and Johnny Patto (guitar), who as the Redcaps had previously hacked Oh Boy! regular Cuddly Duddly. The group spent most of that year gigging around the UK and in Hamburg, where they starred at the prestigious Star Club. The cutlass wielding buccaneer and his band were particularly popular in Liverpool, where they often played the Cavern Club, where future Merseybeat stars watched and learned from their idols, and also topped the bill over The Beatles on a Mersey riverboat shuffle.

In January 1963 the group scored with their verson of A Shot Of Rhythm ‘n’ Blues' coupled with the equally popular 'I Can Tell', the first track to feature guitarist Mick Green who replaced Patto. That summer their new manager  Gordon Mills convinced them to record “Never Get Over You”, a catchy song he had written, and previously recorded with his group The Viscounts, which had a Merseybeat feel. Initially the group were not too keen as it was a little too commercial for them. However, it rocketed into the Top 5 and the similarly styled Mills-penned follow up 'Hungry For Love' also gave them a Top '20 entry, and a year later was used by The Searchers as the lead track on a Top 5 EP. The group's last chart entry came in 1964 with Always And Ever', which was based on the 19th century Neapolitan song 'Santa Lucia".  Later singles, including Kidd's versions of Jewel Akins hit The Birds & The Bees', The Miracles' million seller 'Shop Around', Marvin Rainwater's 1958 No.l ' Whole Lotta Woman' and an updated 'Shakin' All Over '65' sold only moderately well but this did not really affect Johnny's amazing capacity for pulling big crowds wherever he played.

In 1966, Johnny married long time girl friend Jean Complin and among his wedding guests were Tom Jones, Georgie Fame, and members of The Hollies and Pretty Things. In April that year The Pirates set sail without Johnny in search of more fame and fortune, and after that mutiny he put together The New Pirates (who evolved from Liverpool band The Avengers). He was very happy with the group and their live shows were very well received. As a Norfolk newspaper reported "Always a very visual performer, Johnny's voice sounded more powerful today than when this legend of British rock'n'roll was in the charts! ". However, tragically, soon afterwards, when driving back from a gig in Nelson, Lancashire, Kidd was killed in a crash near Bury.

'Send For That Girl', which Johnny had hoped would return him to the top, was released shortly after his funeral. Despite the fact that he had played such a pivotal role in British rock music, the single received little support from the British music media and, ironically, even the recently launched Pirate Radio ships turned a blind eye to the record. It seemed that Johnny's image and sound no longer fitted. Perhaps the reason was in his genes, he was too Gene Vincent and not enough Gene Pitney for the .swinging sixties set. Apart from all the A and B sides of all the group's singles, this top notch collection includes many noteworthy recordings that were not made available until after Johnny's death. Among the lesser known jewels are the group's distinctive interpretations of rock favourites The Fool', 'Let's Talk About Us', Dr. Feelgood' and 'Some Other Guy'. In addition, they offer unique treatments of 'Your Cheating Heart', 'Right String But The Wrong Yo Yo', 'You Can Have Her' and 'I Just Want To Make Love To You' (recorded three years before the Rolling Stones version!).

Although they never had a hit of their own in the USA, they are held in high esteem there. Rolling Stone magazine summed up Kidd's group by saying "They were a prototype for the heavy metal guitar trios that they predated by nearly a decade", while other American critics pointed out that they were recording R’n’B songs long before the Beat Boom and British Invasion bands. This set plunders Johnny Kidd & The Pirates' vault and oilers you the very best of their recordings - and, if you'll excuse the pun, it's an album to treasure.
by Dave McAleer  (with thanks to Adrian Barrett) 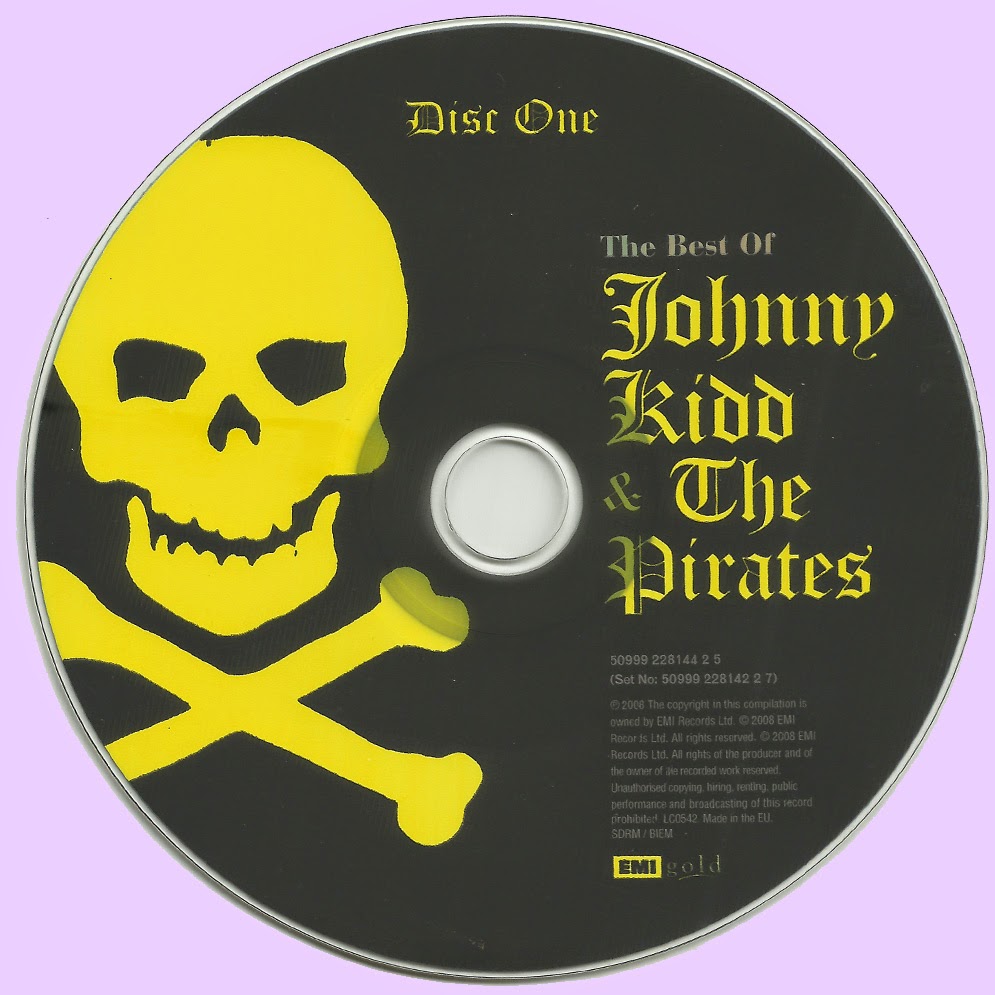 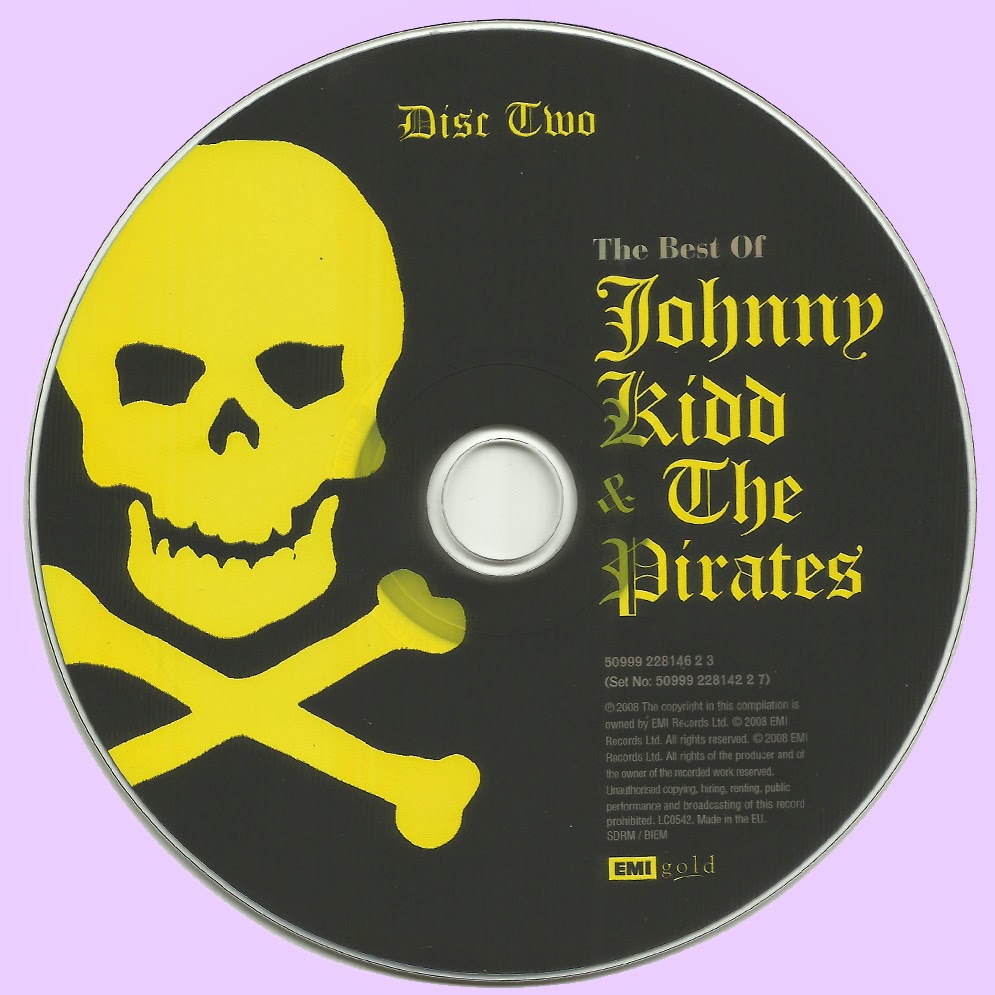