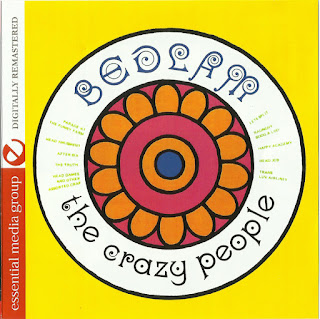 Little is known about this late-'60s band other than they were Canadian, recorded their sole album Bedlam on the Burnaby, British Columbia-based Condor exploit label (home to a wide diversity of bands, among them Latin Holiday, Blues Train, the Surf Riders, and the Jimmy Cole Unlimited), and were intensely weird even for the era. From there, perhaps appropriately enough, everything gets a bit fuzzy.

Much of the Crazy People legend is couched in mystery and subject to various rumors and speculation. It is thought, because of the label it is on, that the band was actually an exploitation studio project rather than a proper combo. The most plausible theory is that it is the brainchild of Johnny Kitchen, whose name may seem terribly arcane to the casual music fan but is well-known among '60s collectors despite the fact that his identity remains a complete enigma. What is known about Kitchen is that he was something of a poor-man's Kim Fowley. He had a hand in literally dozens of crazed and experimental underground records in America during the latter years of the decade. Ending up in Los Angeles in late 1968 or early 1969, he began making records on the Crestview label beginning with the self-titled Victims of Chance debut. He was also involved that year with the bizarre first album from certified schizophrenic and acid freakazoid Larry 'Wild Man' Fischer, Evening with Wild Man Fischer, which was released on Frank Zappa's Bizarre label.

This is where a connection turns up that is both veiled in conjecture and seemingly more than coincidental. Fischer's album shares not a few similarities with the Crazy People album. In fact, the two contain a couple identical elements, including an entire chorus and vocal on one song. Some attribute the shared moments to pure happenstance or perhaps musical borrowings. Others (among them Gear Fab head Roger Maglio in the CD reissue liner notes) have suggested that the two albums are possibly the work of a single man: Wild Man Fischer himself, who perhaps also used the pseudonym Johnny Kitchen for outside projects. Crazy People's Bedlam precedes Fischer's debut by nearly a year, and, in fact, it is known that Kitchen was in Canada during 1968, involved in another Condor release, The World With the Trio of Tyme. He has two songwriting credits on Bedlam as well. From there the guessing game gets muddier and more inexact, and other plausible names have been tossed around, including a local Vancouver personality, television weatherman Jack Millman, who also has several songs on the album. More than likely, however, the truth of the matter has lived and died with the 1960s themselves.

Inside the grooves of Bedlam lies some dramatically unhinged stuff, a schizophrenic, psychedelic mutation unlike any other from the era. From the opening few bars of "Parade at the Funny Farm," the direction of the album is evident -- that is, that there is no direction per se. If you borrowed all the weirder sound-collage stuff, satirical performance-art, and politico-comedic humor from the early work of the Mothers of Invention or the Firesign Theatre and superimposed it over some oddball, calliopic melodies and eclectic stylistic jump-cutting, you would begin to approach the mayhem of the sole effort by Crazy People.

For example, "After Six" is a really beautiful, swaying kaleidoscopic pop tune. Or it could have been pretty. Over top of the music, however, a stoned philosopher narrates an involved story (an amusing amalgam of fairy tale, cartoon, Bible epic, and Greek tragedy delivered, nevertheless, with an absolutely stony-faced tone) in a manner similar to Cream's kooky "Pressed Rat and Warthog." "Head Games and Other Assorted Crap" is a partly a sound collage a la the Beatles' "Revolution No. 9," but the collage arises out of a lovely sunshine-pop tune that ultimately gives way to bits of jazz and tribal music, and even a choir at one point. The album is very much a product of its times, and the humor very much endemic to the era, rendering Bedlam as a perfect, encapsulized historical record of the times: part bollocks, part inspiration, and all intriguing, even when it falls on its face.
by Stanton Swihart 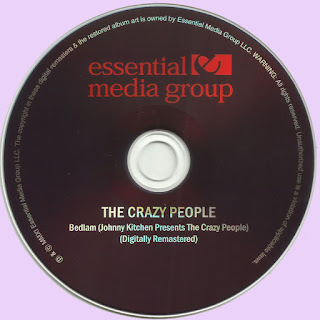 Free Text
the Free Text
Posted by Marios at 2:53 AM 5 comments: