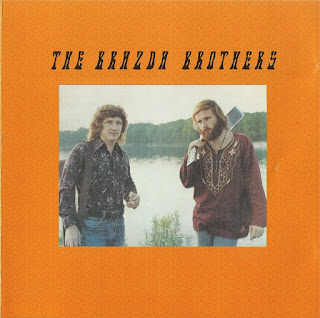 By the early 70’s Slovakia-born brothers Bystrik and Andy Brazda had relocated to Ontario, Canada in search of greener pastures. Shortly after settling down in their new home they began writing music together. Canadian owned Dominion Records released their first and only lp, The Brazda Brothers, in 1974. Rumour has it that the brothers laid the entire album to tape in a marathon six hour session at RCA Studios in Toronto. Marathon session or not, The Brazda Brothers is one of the finest psych-folk lps ever pressed to wax.

The first track, “Walking Into the Sun”, sets the warm and peaceful pace that permeates the album when a lightly strummed acoustic guitar gives way to a gentle soft-psych tune that comfortably slinks by–full of melodic, wistful vocals, crystal clear electric guitar, thumpy tubby drums, and a wonderful appearance by what sounds to be a calliope, but is credited as a Cordovox–the same keyboard that shows up frequently to add its unique touch to much of the record. Right off the bat it’s clear that the brothers had a vision to share and they do so in an innocent, heartfelt way. This homegrown feel sets their record apart from the pack, earning it a place at the table with other lost classics of the era.

“Share With Love” is an upbeat number that encourages the listener to consider the needs of their fellow brothers and sisters. With its reverb drenched guitar and minor key refrain this tune has an almost garage flavored folk-rock sound, and its slightly eerie vibe adds a different taste to the record and shows a different side of the brothers’ sound. Midway through the album the brothers turn the volume up a bit with “Gemini”. Complete with gloriously fuzzed-out electric guitar and an almost-boiling Hammond Organ that adds something exotic to the mix, this tune definitely delivers in the psych category and comes out as one of finest cuts on this collection. The entire song has a subtle Eastern-European vibe that becomes most apparent when the brothers harmonize on the refrain. On the next track, “Nature”, Andy dreams of a carefree life spent living in the country, singing “the sun will shine all day/Mother nature will be our neighbor”. Reminiscent of “Hello Sunshine” and other tunes off of the Relatively Clean Rivers lp, this song has a great late sixties soft-psych vibe as well as a catchy chorus, and continues the acid-rural-pastoral-folk vibe that begins with the album opener.

“Lonely Time” is a beautifully sad little gem that finds Andy again longing for the peace and serenity of a home surrounded by nature and the familiar faces of friends and loved ones. In 2008 Panda Bear of Animal Collective fame payed tribute to these Slovak brothers when he released a remix of The Notwist’s “Boneless” that uses the opening riff of “Lonely Time” to fine effect.

The only criticism of this album is that several of the songs, such as “My Little Girl” and “Nature” have a very similar sound. However, it’s hard for it to bother you when it’s such a great sound! In the end, the pure and honest nature of the album along with the wonderfull vibe trumps any criticism.

The Brazda Brothers is a great album that stands shoulder to shoulder with other similar sounding lost classics of the time such as Relatively Clean Rivers, Rodriguez’s Cold Fact, and Jim Sullivan’s UFO. With their laid-back attitude, sunny rural vibe, and unique voices, the brothers crafted the perfect album for a lazy summer afternoon full of good vibes. As you’ve already guessed, original copies are rare, and sell for a very pretty penny when they do pop up. Hallucination CDs out of New Jersey re-released the album on cd with a limited pressing of 1,000 copies, and Void Records has reissued the album on vinyl. Pick up a copy while they’re still available!
by D.A. Glasebrook 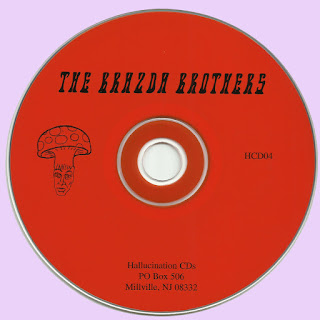