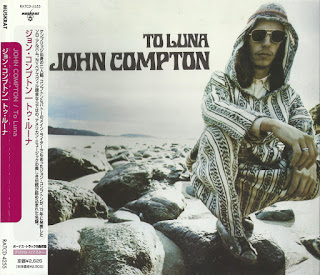 Singer, songwriter, and guitarist John Parker Compton co-founded the acoustic band APPALOOSA with violinist Robin Batteau in the late '60s. Both musicians had been heavily influenced by the folk scene in their hometown, Cambridge, MA. Compton got his start singing in a Cambridge church choir before he and Batteau began playing the coffeehouse circuit together.

As the 1972 press release for Compton's solo album, To Luna, tells it, John Compton showed up at producer Al Kooper's Columbia Records office in late 1968, hoping to show Kooper his songs. Uninterested, Kooper told the kid - Compton was 18 to come back some other time. But a little while later, Kooper came in on Compton and Batteau performing for the office secretaries. Won over, Kooper recorded their demo, and within a year the newly signed musicians had an album out, the self-titled debut from their group Appaloosa. Also including bassist David Reiser and cellist Eugene Rosov, Appaloosa was joined in the studios by members of  Blood, Sweat & Tears, and by Kooper himself.

A year after Appaloosa's 1969 release - which was produced by Al Kooper on Columbia Records, a 19-year-old John Compton got to take the stage at Fillmore East the last weekend of December, along with the Allman Brothers, and Blood, Sweat, and Tears. Appaloosa soon gave way to a duo project of Compton & Batteau, and the two musicians recorded Compton & Batteau in California for Columbia. By 1971, Compton was on his own with a new LP, To Luna, but after this, it would be over 20 years before he returned to the studios. His return was marked by 1995's Mother of Mercy, which was followed by a six-song self-released recording of Compton on a Vermont radio station....
by Joslyn Layne 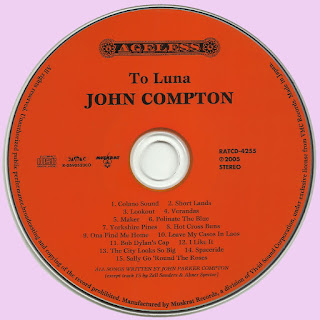 Free Text
Text Host
Posted by Marios at 9:06 AM 3 comments: