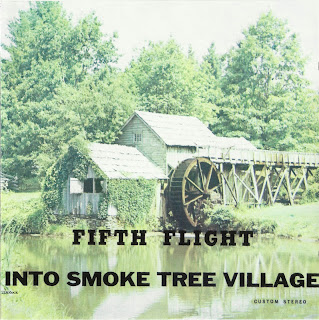 In the mid sixties, five football players from a local high school got together to Jam. The sounds blended and recorded an album for the Century label which was a late 60's early 70's Californian custom record label that pressed tens of thousands of small-run records for schools, church groups and obscure local bands. This was one of those delightful garage/psych jewels that occasionally cropped up on the label.

With its rustic mill cover this a a garage psych album consisting mostly of covers, delivered with lashings of fuzz guitar and heavy, spooky organ. The stand-out track surely is the jaw droppingly awesome cover of Neil Young's "Sugar mountain". What you are hearing on this album are moods, transitions and feelings of the Fifth Flight. 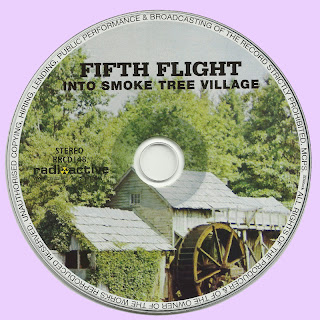 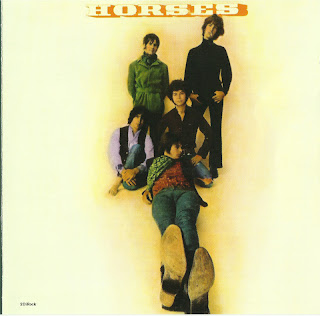 As a radio personality in Los Angeles whose show, The Diamond Mine, became wildly popular in the 1960s. I had the opportunity to become friends with and hang out with many rock groups who were just starting out and had not yet signed record contracts. The Doors, Love. Iron Butterfly, The Black Sheep, Peanut Butter Conspiracy, The Seeds, and the Rainy Daze all joined the Dave Diamond High School Revue. It became famous for presenting noon shows, after-school shows, and evening shows throughout Hollywood, Beverly Hills, Santa Monica, and the entire San Fernando Valley.

The most I ever paid any band was $175 - to the Doors. (The receipt still hangs on my wall.) Once these groups signed record deals, my show was the only show in L.A. that would play this new "psychedelic" rock. The show was heard on a small station, KBLA, out of Burbank, then going through a format change from Top 40 to Country.

I had two years left on my contract and the new owners said, "Just do whatever you want to do -- we are applying for more power and a call letter change (KBBQ), so we have no idea when the changeover wil take effect." I had never had this much freedom presented to me and I took advantage of it, playing far-out album cuts, some Top-40. acid rock, mainstream pop - even a couple country tunes now and then. Think of this: The Doors "Light My Fire." followed by a tight segue to George Jones' "The Race Is On." It was the first time new groups got exposure on the radio. And this was the true beginning of underground radio. It lasted a little over two years.

The kids tuned in The Diamond Mine nightly and took the elevator to the "stoned fume room," lit by the one-eyed cufflink. Each level of The Diamond Mine required another joint. Frank Zappa called me one night and said, "I like the show so much tonight. Dave. I'm smoking my radio." Some of the music The Diamond Mine played first that became hits: "Light My Fire" (after I suggested to Morrison, Robbie, and John that the long guitar ride be edited out for Top-40 radio): "Acapulco Gold" by the Rainy Daze, a disguised but blatant ode to marijuana, The Seeds' "Pushin1 Too Hard": Love's "DaCapo" LP, "In-a-gadda-da-vida," by the Iron Butterfly.  "Boots Are Made for Walkin'" by Nancy Sinatra, and Linda Rondstat's "A Different Drum." I was the first to play the Rolling Stones' 17-minute "Goin’ Home" on the radio -- and I played it twice, back to back.

What does this have to do with the Horses CD you just purchased? Plenty, and most of it relates to the Rainy Daze. I met the group in Denver in 1964. I was doing a popular evening radio and TV show. We booked the Rainy Daze, and they played live on the TV show. This was 1964. They did three of their own original songs. I signed on as their manager and through Black Hills Music as publisher of all of their songs. Tim Gilbert, the lead singer, and John Carter, the lyric writer, became my best friends. In 1965, I moved to LA and the Rainy Daze went with me.

I had been hired to kick off a new rock radio format called "Boss Radio," a very tight Top-30, grind-out-the-hits machine, which has become legendary in radio history. I didn't last long and landed at KBLA, which turned out to be a lightning stroke of luck for me and the many artists and groups that mainstream radio would not touch. I started doing a talent show at The Trip on the Sunset Strip -  kind of a 1960s American Idol - and for some reason this amateur contest became the place to be on Tuesday nights. It's where I met Phil Spector, Elvis, etc. I played tapes of the Rainy Daze for Phil, but he seemed on the borderline.

So I worked a deal with Russ Regan at UNI Records (Universal Movie Studios), and we released Acapulco Gold, written by Carter-Gilbert. The song took off and started climbing the charts. It was headed for number ONE when Time magazine, Esquire, and other big time media outlets figured out the lyrics and that led to most major-market radio stations dropping the record. Acapulco Gold is, however, the best-selling single in the history of San Fransisco - over 150,000 45's sold.

The Rainy Daze did an LP for UNI with some great psychedelic tunes on it along with "Acapulco Gold." One of my favorites was "Snow, Ice, and Burning Sand." Carter and Gilbert then wrote "Incense and Peppermints," and we found a band out in the Valley with the unlikely name "The Strawberry Alarm Clock." I owned the song and sold half of it to Frank Slay at Claridge Music and we produced it with the Alarm Clock and released it on our own label, then sold the master to UNI Records. It hit number ONE in the fall of 1967.

The Rainy Daze were unhappy at UNI and asked me to find them another label that might do a better job promoting their records. I signed them to White Whale Records, the "Turtles" label. The Turtles were burning up the charts with "It Ain't Me Babe", "Happy Together", "You Baby", etc. We released several Rainy Daze singles on White Whale, but nothing happened. By this time KBLA had gone country and I was doing the 6-9 PM show on KFRC, San Francisco, one of the hottest, best sounding rock 'n' roll radio stations in the U.S.A. Carter and Gilbert still lived in L.A., although both would move to San Francisco.

The Rainy Daze broke up. But Carter and Gilbert had written an album (what you hear now as Horses), and so we needed a band. We had decided that the 60s would be the only decade we could write and produce a "tongue 'n cheek" song about a 69 sex act. I formed my own production company, Glitter Gulch Productions, to produce the album and Black Hills Music to publish the songs.

We recorded the project at LaCosta Recording Studios at LaCosta and Ventura in Hollywood and also recorded part of it at Pacific Sound Studios in San Francisco. We had few people in mind, but we held auditions and put the following personnel together: Dave Torbert - who after Horses played with New Riders of the Purple Sage and Bob Weir's breakaway band from the Grateful Dead, Kingfish. Torbert is dead. Scott Quigley - later played for the Sammy Hagar Band. Quigley is dead from an overdose of drugs. Matt Kelly - went on to play in Kingfish. Destiny unknown. Chris Herold - drummer - also ended up on Grateful Dead records with Kingfish. Destiny unknown. Tim Hovey - a co-writer on Asia Minor.

Hovey was a huge child-star in the movies. Biggest role was Little Beaver in the Red Rider Series. Also starred with Charleson Heston and many other famous names. Dead - drug overdose. Don Johnson - lead singer - we started this group with Rich Fifefield as the lead singer. Fifefield was the star of the Astronauts, an early 60s band. Midway during the sessions, we decided Rich wasn't right for the sound we wanted on the Horses LP. We held auditions, and this young kid. Don Johnson, showed up and sang like hell. We hired him and finished the LP. Johnson was 18. Was this the actor Don Johnson? We don't claim it unless you do. The Horses LP was this kid's first professional gig, and I never saw him again after the sessions.
by David Diamond 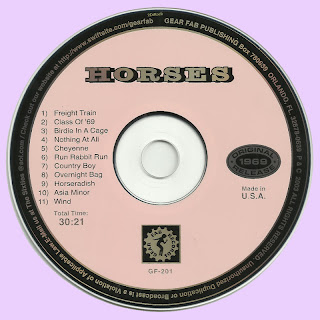 Free Text
Just Paste
Posted by Marios at 1:28 AM 13 comments: