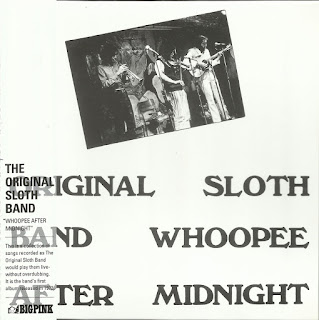 This is a collection of songs recorded as The Original Sloth Band would play them live - without overdubbing.

The first song is an old fiddle tune. Learned from Chet Parker's hammered dulcimer version "The New Heartbreak Blues" is roughly based on Gus Cannon's "Heart Breaking News" with a few words from Willie McTell. Fats Waller was the inspiration for "The Sheik of Araby". "Heaven" has been recorded by Flatt & Scruggs, among others (notably Red Allen & The Kentuckians on County). "The Johnson Rag" was adapted from Jimmy Dorsey and his Dorseyland Band's version, featuring the inimitable Claire "Shanty" Hogan. Probably the only other version of "I Just Want To Be Horizontal" is by Pat Flower and his Rhythm. "Stealin' " is from the most prolific of the old jug bands: The Memphis Jug Band.

Side Two opens with the old Coon & Saunder's Nighthawk's hit, "Rhythm King". "Get A Job" is by that traditional folk group, The Silhouettes. More than one source went into "The How Long Blues" but it owes its greatest debt to Franki "Half-pint" Jaxon. We found "Vulture..." at a Kiwanis Club rummage sale. "Mandolin King Rag" is in honour of the original mandolin king, Ex-King Thug III of Belgravia. "Coming In Glory" is from the singing of Fred Price, Clint Howard, and Doc Watson. "Buddha's Got The Blues" comes from the hot sleepy delta land of southern North York.
by Ken Whiteley

Back in the mid sixties of the last century, in the hot, sleepy delta land of southern North York, the Original Sloth Band began. Brothers Chris and Ken Whiteley and their friend Tom Evans started what was originally a jug band called Tubby Fats Original All Star Downtown Syncopated Big Rock Jug Band.

By 1973 they were known as the Original Sloth Band. At the forefront of independent recording, they released their first album, "Whoopee After Midnight." It was an incredibly eclectic mix of styles ranging through jug band to swing, fiddle tunes to doo wop, obscure songs from the 20's, 30's and 40's, bluegrass and more. Between the three of them they played 17 different instruments, all recorded live off the floor.

In 1975 the "Sloths" were back in the studio recording "Hustlin' and Bustlin." This time out they added string bass and drums to some tracks and were focusing more on early blues, jazz and jug band music. The early 1970s also marked their emergence in the burgeoning folk festival scene. They went on to prominence at festivals across Canada and in the United States.

Their third album was recorded and mixed by Daniel Lanois and featured contributions from the legendary Chicago blues pianist Blind John Davis. Titled for the year of its recording and release, "1978" demonstrated their growing musical sophistication while retaining their funky, old time roots. Also in 1978, they recorded with Leon Redbone on his album "Champagne Charlie" touring with him and appearing together on the famed television show "Saturday Night Live."

The following year Ken Whiteley recorded a gospel album, "Up Above My Head" which enlisted the support of his fellow Sloth Band members and also added the vocal harmonies of a trio of women calling themselves the Honolulu Heartbreakers. For the next two years they began doing shows as an 8 piece ensemble!

After 1981, Chris and Ken both began pursuing other musical ventures. However they would still get the Original Sloth Band together for special engagements. The band gave it's last performance just a year and a half before Tom Evans' untimely death in 2009.

Chris and Ken Whiteley are both still very active in the Canadian musical scene. Chris has been focusing on his work with blues artist Diana Braithwaite. Ken is noted for his blues and gospel performances, his work in children's music and his record production. From time to time, though Chris and Ken will perform together and echoes of those early jug band blues, Original Sloth Band days will ring out once again.
CD Liner Notes 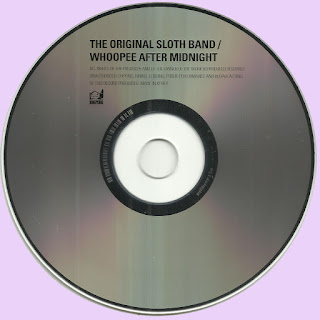 Free Text
the Free Text
Posted by Marios at 6:24 AM 3 comments: