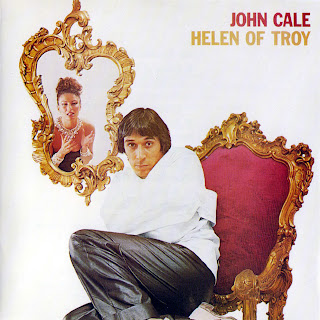 The supporting crew on Cale's final Island album makes for a lineup that could never have happened again -- at least, in terms of future results, imagining, among others, Cale, Chris Spedding, Brian Eno, and Phil Collins once more in the same room together seems totally unlikely. Regardless of the oddity, Cale once again led a great ensemble band (Spedding now having fully taken over from Manzanera on guitar) through another set of great, inspiring songs.

Whoever is putting in the guitar solos, Spedding or Cale, sometimes misfires, sometimes succeeds brilliantly -- consider opening song "My Maria," where the earlier efforts are intrusive but the concluding parts a perfect addition to the building smack of the song. Cale's songs generally tend towards the uneasy throughout, his sometimes strained but never forced singing, high volume at points, making the most of the material. The atmosphere of the album as a whole is perhaps the most band-oriented of the three Island records, with further arrangements sounding like additions more than intrinsic parts of the songs.

It's not a criticism, though, more an interesting experiment with often strong results, like the strident horns and heavily treated noise on the title track. "I Keep a Close Watch" is the secret emotional sucker punch on Helen of Troy -- Cale long harbored a sadly unfulfilled dream that Frank Sinatra might cover it, and there's little doubt why. Taking the opening line from Johnny Cash's "I Walk the Line" as inspiration, with a much different thematic intent, it's an unabashedly romantic number with a great string and horn arrangement.

There are, again, gentler moments that call to mind earlier tributes to the Beach Boys here and there, such as "China Sea," along with a great rendition of Jonathan Richman's "Pablo Picasso." Overall, Helen of Troy finds Cale at his edgiest, with fascinating results.
by Ned Raggett 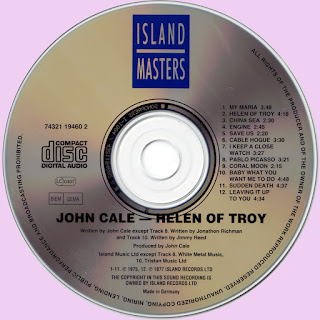 Free Text
Text Host
Posted by Marios at 8:17 AM 4 comments: