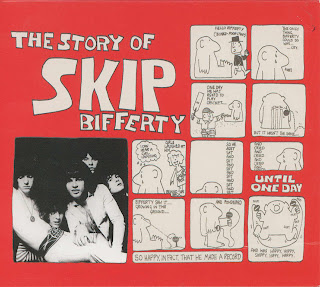 The origins of Skip Bifferty can be traced back to the mid-60s and the North of England's Newcastle beat scene. The Chosen Few were one of the leading unsigned bands and featured founder members Alan Hull (guitar/vocals, later in Lindisfarne) and Mickey Gallagher (keyboards). Both had played together in local outfits previously, starting with The High Five in 1962. Gallagher was playing in another local group, The Unknowns when Alan Price announced his departure from The Animals. Mickey Gallagher was drafted into the famous Geordie outfit for a short tour of Scandinavia and the UK, playing keyboards for Eric and the boys.

On his return to Newcastle, Gallagher and drummer Alan Jackman from The Unknowns recruited old pal Alan Hull and singer Rod Hood together with bassist Alan "Bumper" Brown to form The Chosen Few. They rehearsed at the Key Club in Newcastle, which was owned by their manager, Bill Keith, who managed to get them a 15-minute slot on Radio Luxemburg performing live, and, from that broadcast, the group was signed to Pye Records.

By the Summer of 1966, with a year of successful gigs and two singles under their belts, the band lost Alan Hull and "Bumper" Brown, but found replacements in Colin Gibson (bass) and John Turnbull (guitar). The young duo had been friends since the age of five, and were both former members of The Primitive Sect, a group which also featured Bob Sergeant on organ (later in Junco Partners).

A few months later, Graham Bell returned to his home town of Newcastle after his group, The Graham Bell Trend, had broken up due to lack of interest down south. Bell had met up with Mickey Gallagher during his stint in The Animals, and The Chosen Few offered him the vocalist spot. Although he'd released one 45 on Polydor, which was in an MOR direction, he saw The Chosen Few as where it was happening.

The group secured some London gigs, and it was during a particularly scorching set at the Marquee that Don Arden approached them with an offer that they couldn't refuse: "In 9 months you'll be as big as the Stones", he said.With that, the band signed, and Arden immediately put them up in a house in Beckenham to "get it together", which they did, pouring out new songs with intricate arrangements that showcased their many talents. To further highlight their artistic talents, they also painted the lawn red!

Arden secured a deal with RCA in the Summer of 1967, and the first fruits of that deal was the bands' first 45, "On Love"/"Cover Girl". The A-side featured a blistering killer fuzz guitar riff underpinning Graham Bell's superb soulful Spencer Davis-like vocals. The pirates, Radio Caroline and Radio London, loved it and gave it heavy rotation, but due to the BBC's playlist policy at that time, the latter failed to pick up on a classic single. The track was later recorded as "Our Love" by The Sons Of Man on their hideously rare "Oak" EP from the same year. Meanwhile, work flooded in, including appearing in the cult 60s film "Smashing Time", featuring Rita Tushingham. Sadly, their music doesn't appear on the LP soundtrack.

A follow-up single was required, and with more than a little influence from Don Arden, the band wrote the flower-power pop ballad, "Happy Land", which was recorded at Decca's West Hampstead studios during the first session for a projected album.The band began to do regular sessions on John Peel's "Perfumed Garden" and became firm underground favourites. "Happy Land"/"Reason to Live", their second 45, was issued in the late Autumn of 1967. Sadly, it, too, failed to ignite record buyers' interest, and RCA sat on their album.

Chris Welch, staff writer at Melody Maker, discovered the group around this time and began to write about them. They played gigs and worked hard, gaining a respectable following over the country. A third and final RCA 45, "Man in Black"/"Money Man", was issued in July 1968, arranged and produced by Small Faces duo Steve Marriott and Ronnie Lane (both of whom were also on Arden's books).

The label were certainly unsure of how to market the band, as a promo 45 with "Money Man" as the A-side was pressed up in limited quantities just prior to its release, before the sides were flipped! This early version is markedly different and raw-sounding. "Man in Black" was eventually pressed as the A-side with the finished studio LP version of "Money Man" on the B-side. The 45 certainly showed a return to form for the band, however, the single only sold at underground level.

With further recordings made, RCA finally issued their debut, self-titled LP, complete with sleevenotes by John Peel. Unfortunately, many of the credits were wrong, and mono pressings had stereo labels and vice-versa. To cap it all, the band were unhappy with the sound of the LP! Under pressure, the record company had the LP re-cut, and it was re-launched a month later with a better sound and with orange RCA labels (the original pressing had black labels)

For underground psych fans, this LP was a major release, and Chris Welch in Melody Maker gave it a rave review. The LP showed the band to be experimenting with different sounds, effects, tape loops, phasing, while still retaining a classic pop music sound.

The band half-heartedly began working on a follow-up LP, called "Skiptomania". Colin Gibson even completed artwork for the album, but the label decided not to extend their contract. To make matters worse, the band's relationship with Don Arden was now strained to say the least, mainly due to him not grasping the reality of the late 60s music scene. He was still treating them like a beat group whose very existence relied on their hits.

In order to shake off their restrictive management deal with Arden, the band made a shock announcement in the music press that they were disbanding in November 1968. In actual fact, the whole band nipped off to the Isle of Wight, where they rented a cottage, rehearsing and writing new material. Mickey Gallagher made several trips back to London in an effort to secure a new record deal and attracted the attention of Chris Blackwell of Island Records.

A publicity scam was cooked up, and 'Time Out" magazine ran an advertisement for a mystery group called Heavy Jelly. The result was the longest 45 released at that time."I Keep Singing That Same Old Song"/"Blue", written by bassist Colin Gibson, was released in June 1969. Apart from the length of the song, it was also issued in a picture sleeve - unheard of for Brit 45s then.

There was a lot of guesswork as to their identity, with people citing Spooky Tooth as the culprits, but "Time Out" magazine gave the biggest clue of all when they stated that the single "really skips and biffs along"! The 45 became a hit all over Europe and was included on the Island sampler, "Good Enough to Eat".

As an aside, it's worth mentioning two other enterprising companies who also got in on the act using the moniker Heavy Jelly. One was Head Records, who put together a group, later to back Jackie Lomax, and recorded a whole LP. They also released a 45, and test pressings of their LP turned up in the early 70s, later to be reissued by the Psycho label in 1984. The other outfit was created Simon Napier-Bell and only got to be issued in the States. In any case, Don Arden, worked out the identity of the real Heavy Jelly, and Chris Blackwell, not wanting any conflict, backed out of working with Skip Bifferty. The band, meanwhile, by this time with new drummer Fred Wheatley, were without a record deal, returned to Newcastle and split.

Band members quickly moved onto other projects; Graham Bell and Colin Gibson were soon to form Griffin in 1969 where they issued a 45 on Bell. Meanwhile, Mickey Gallagher and John Turnbull formed Arc in early 1970 where they signed to Decca issuing an LP in 1970 and recording tracks for the film soundtrack to "Extremes", issued in 1972 on Deram. With Graham Bell joining them in 1972, they became Bell & Arc and signed to Charisma where a further LP was released in 1972.

Gallagher & Turnbull continued working together, and in 1976 with a name change to Loving Awareness, with Charlie Charles (drums) and Norman Watt-Roy (bass, ex-Greatest Show On Earth), in total antithesis to the emerging punk scene, they attempted to re-capture the sound of the 60s, where they even recorded a version of Skip Bifferty's "Guru". However, the LP failed to sell, but, in any case, the band achieved success in the late 70s backing Ian Dury with a name change to The Blockheads.

Colin Gibson worked with various groups in the early 70s after Griffin and eventually teamed up with Mark Almond for a US tour and an LP on Harvest. In July 1973, he teamed up with ex-Procol Harum/ Freedom drummer Bobby Harrison (vocals/percussion), ex-Tramline members Mick Moody (guitar) and Terry Popple (drums) and with Pete Solley (organ) to form the heavy rock outfit Snafu where they recorded two albums for WWA and one for Capitol during 1973-75. Colin later joined late 70s outfit Radiator and worked again with Alan Hull on Alan's solo LP. Up until the present day, he is still working in blues bands.

Most of CD1 from "The Story of Skip Bifferty" is their single eponymous album recorded in the autumn of 1967, but only released nearly a year later. However, the interest for Yes fans comes later. The band officially dissolved in 1968 following (violent) disagreements with manager Don Arden. However, the line up actually continued, adopting the name Heavy Jelly (the name of a fictitious band in a spoof review in Time Out) and recording the single included here (36-7). One historical website has it that Heavy Jelly subsequently changed drummer to Dave Potts (who also auditioned for Bill Bruford's spot in Yes when he first left the band) and then to Alan White before splitting up.

White had been working with Kirtley and Craddock as Alan Price's backing band and under the name Happy Magazine. Joined by Gibson, they formed Griffin. Graham Bell soon followed and the three tracks here (38-40) were recorded. The first two are from a Sep 1969 single and the third from an Oct 1969 BBC session for Top Gear. 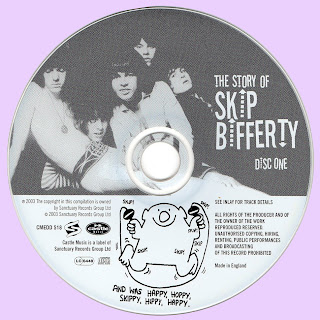 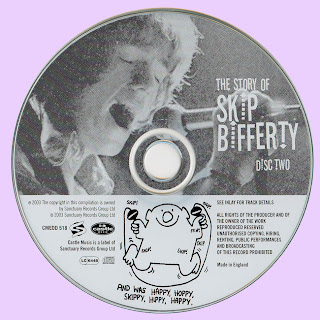 Free Text
the Free Text
Posted by Marios at 7:46 AM 12 comments: