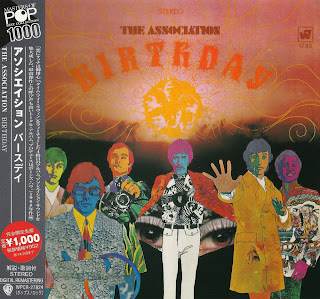 Nobody knew it when Birthday was issued as the Association's fourth album in March 1968, but the group had just passed their commercial peak. Never again would they enjoy such phenomenal popularity as they had in 1967, when "Windy" and "Never My Love" gave them two of the biggest hits of the late '60s, and their Insight Out album (also reissued on Collectors' Choice) became a Top Ten LP. Birthday was nonetheless hardly a slouch saleswise, reaching #23 and spawning the group's final Top Ten single, "Everything That Touches You," as well as the Top Forty hit "Time for Livin'."

The Association's Jim Yester agrees that Birthday was "probably the most pop" of the albums the band did in the 1960s, though he wasn't sure if that was intentional. He does recall it as being a time of uneasy transition for the band, though their trademark harmonious vocal blends were never more intact than on this album. "The relationship was getting very strange at that time between [producer] Bones [Howe] and ourselves," he acknowledges. "Bones contended that had we stuck to that kind of semi-folk genre [which had yielded songs like "Windy"], we would have lasted forever. He was trying to get us to do that, and the group was trying to pull in a more avant-garde direction. I think that was one of the things that pulled the relationship apart. And a lot of other relationships in the group were getting strange at the time."

Howe remained the producer on the sessions, however, which like Insight Out featured top Hollywood studio musicians like drummer Hal Blaine, bassist Joe Osborn, guitarist Mike Deasy, and keyboardist Larry Knechtel. "I'm still really proud of that affiliation with those guys," says Yester. "They're the sweetest guys, and they were so open to direction. Whoever's song it was would go into the studio when guys were running it down for the first time, and they would be asking for direction. It wasn't just like they said, 'Okay, here's how we're gonna do it.' It was like, 'What do you want with it?' It was absolutely a wonderful situation. And such incredible players. Just mind-blowing."

While Insight Out had seen the group turn to outside writers for about half of the material, Birthday returned the focus to the band's own compositions, with a few exceptions. The band's Terry Kirkman was responsible for "Everything That Touches You," the mid-tempo ballad that gave the Association their last big hit. "If we had our preference, we would always prefer the inside material," notes Yester. "But that was getting closer and closer to where material selections were hangings. The guys got real gun-shy about bringing their own material in, because it was like being brutalized by the process. And we were also, each of us, getting involved with people outside the group at that time."

A few of Birthday's tracks, indeed, were collaborations between members of the band and outside writers, Yester penning a couple of songs with childhood friend Skip Carmel. "Those songs that I collaborated on with Skip, most of those are right out of Man and His Symbols by Carl Jung. It's all about personal transformation and archetypes and all of that kind of stuff. When I played it for the group, [Larry] Ramos used to hate that kind of stuff. He'd say, 'What the hell does that mean?' But Bones really liked 'em, so we wound up doing 'em." Ramos himself collaborated with two outside writers on the album's "Like Always," one of the co-authors being Bob Alcivar, who served as the LP's vocal arranger.

Brothers Don and Dick Addrisi, who'd given the Association "Never My Love," supplied the band's final Top Forty single with "Time for Livin'." (It was also the group's sole chart single in England, where they toured around the time of its release, sharing the bill with the Rolling Stones and others at the 1968 New Musical Express Poll Winners' Concert.) Another outside contribution, "Come On In," came from folksinger Jo Mapes, whom Yester had known since his coffeehouse folk days. Yester's brother Jerry's group the Modern Folk Quartet "also did 'Come on In,' that's where we got it from. Although Jo wasn't real happy about the way each of us did it, 'cause she envisioned much more of a soft kind of folk delivery, and we both had kind of hard-edged, rock things."

The most intriguing outside number considered for the sessions, however, was the one that got away. "Bones came in with Jimmy Webb and presented this thing Bones commissioned him to write for us," says Yester. "It was a 24-minute cantata, of which 'MacArthur Park' was a part. The deal was, you take the whole 24 minutes or none of it. We wound up turning it down, and the relationship was never the same after that, because Bones would have had publishing on that." "MacArthur Park," of course, became one of the biggest hits of 1968, as sung by actor Richard Harris - "it was like, 'Okay, I'll show you, I'll give the song to somebody who's not a singer and have a hit with it.

"Jimmy was very bitter, and I can't blame him," Yester continues. "But the deal was his. It was like, it's 24 minutes, take it or leave it. We asked for 'MacArthur Park,' and there was one other song in there that was a great song, a part of this 24-minute cantata, that we really wanted. We were halfway through the album. It's like, okay, whose song is coming off the album? And some of the guys were saying, 'Oh, we can write better stuff than that.' It was great stuff, but there was no way that we could have taken the whole thing.

"Jimmy knew it would have been a monumental piece, a 24-minute piece that was all threaded together, of which these things were all part of. I'm sure it would have been mind-blowing. But we couldn't see it at that time. Had we done that, it would have been trend-setting, and we probably would have reinvented ourselves a la what the Bee Gees did with Saturday Night Fever." As it was, the Association had to content themselves with another hit album that continued to cement their image as a mainstream pop group, although they'd gain more creative control over their sound on their next LP, 1969's The Association.
by Richie Unterberger 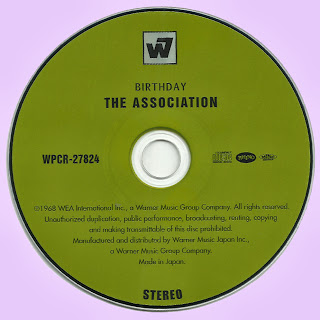 Free Text
Text Host
Posted by Marios at 5:42 AM 15 comments: