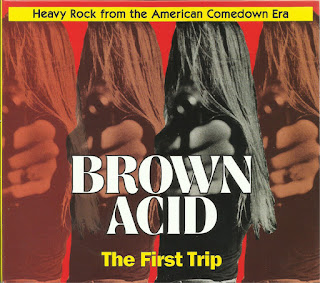 After Flower Power and before punk, heavy, hard rock bands dominated the American music scene. In towns across the country, garage bands that had grown up taking drugs, flashing peace signs, and listening to the Beatles had witnessed the atrocities of Vietnam and Altamont, gaining a new perspective in a darker, crunchier, and more bombastic sound in their music. Bands like Led Zeppelin, Black Sabbath, the Jimi Hendrix Experience, Grand Funk Railroad, and Deep Purple were blasting out of muscle car windows, influencing a new generation of jaded musical amateurs.

Some of these ambitious groups earnestly composed some pretty far out jams. Playing hard and heavy just like the pros, these bands were on par with their heroes, albeit with a much smaller budget and inferior gear. The 45s these bands produced, mostly independently, were glorified demos given to record executives or sold for gas money. Generally speaking, a few hundred copies were sold direct to fans at local gigs outside of any kind of distribution. These pressings have since become highly sought after rarities and fetch serious coin when they are offered up for sale. Hence, the need to compile some of this material in a series we're calling Brown Acid.

The tunes compiled here come from a time that's been neglected in the compilation realm. The purgatory that lies between garage and punk has caused these gems to go overlooked by closed-minded collectors for far too long. Expand your mind, embrace the bad trip, and follow us down a two-lane highway into the abyss that is the American Rock'n'Roll Underground circa 1968-1979.
CD Liner Notes 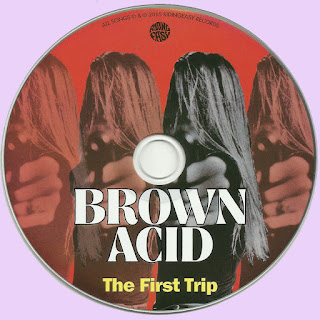 Free Text
the Free Text
Posted by Marios at 5:10 AM 10 comments: