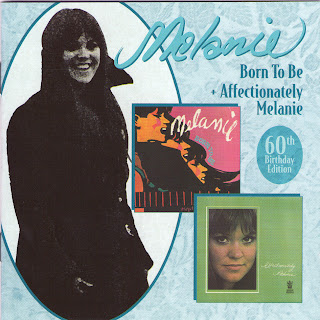 No talent who came out of Woodstock and who continued actively performing more than a quarter century later remained as closely associated with the 1960s and "flower power" than Melanie. Born Melanie Safka in Astoria, Queens, in 1947, she made her first public appearance at age four on a radio show, later studying at the New York Academy of Fine Arts. After mounting a singing career while in college, she later sang in clubs in Greenwich Village, and was signed to a publishing contract in 1967. She recorded her first single, "Beautiful People," for Columbia Records that same year. Her relationship with the record company was short-lived, however, and after one more single she left the label.

In 1969, she chanced to meet producer Peter Schekeryk, and after a hastily arranged audition, he took charge of her career. Her first album, Born to Be, was recorded and released by Buddah later that same year. On August 16, Melanie took the stage at the Woodstock Music & Art Festival in Bethel, New York; her song "Birthday of the Sun" was later released on the Woodstock 2 album, and 20 years later it was released on video as part of Woodstock: The Lost Performances, alongside the work of Janis Joplin, Crosby, Stills & Nash, and the Who.

Soon afterward, she cut her second album, Affectionately, which did slightly better than her first; however, her commercial breakthrough came 11 months after Woodstock, when she released the song "Lay Down (Candles in the Rain)," recorded with the Edwin Hawkins Singers. The song, written as a tribute to the audience at Woodstock and displaying the feel of a gospel hymn, rose to number six on the U.S. charts, while the accompanying LP, entitled Candles in the Rain, reached the Top 20.

After 1970's Leftover Wine, a live album recorded at a Carnegie Hall concert, she issued a plaintive version of the Rolling Stones' "Ruby Tuesday." In January of 1971, Melanie's own version of "What Have They Done to My Song, Ma," a recent smash for the New Seekers, got to number 39 in Britain, where she emerged as a major star. In March, however, her new release, The Good Book, peaked on the U.S. charts at just number 80, despite the presence of several impressive tracks, among them a hauntingly beautiful cover of Phil Ochs' prophetic, doom-laden self-eulogy, "Chords of Fame."

At around this time, Melanie rebelled against her contract with Buddah, which required her to supply albums more or less on demand -- she'd had four LPs released in half as many years, and wanted more control over her work and career. With help from Schekeryk, whom she had married, she organized her own label, Neighborhood Records, during the summer of 1971. Her first subsequent single, "Brand New Key" hit number one on the U.S. charts while on its way to becoming a million seller; thanks to its not-so-subtle sexual undertones, the song became a kind of "in" dirty joke in some circles, and was even censored on some radio stations, but it also made Melanie one of the top-selling artists of the year 1971.

The accompanying album, Gather Me, was the best produced long-player she had ever released, and reached a chart position of number 15, earning a gold record in the process. This huge success prompted Buddah to release Garden in the City, consisting of previously unreleased outtakes. At the same time that 1971's Gather Me spawned the single "Ring the Living Bell," Buddah decided to capitalize more directly on Melanie's catalog and released "The Nickel Song"; the presence of two singles in release simultaneously from two different labels and distributors -- each competing for radio play and listener dollars -- damaged both releases, and they effectively canceled each other out.

Garden in the City rose to number 19, but her next new album on Neighborhood, Stoneground Words, only got to number 70 late in 1972. In June of 1973, her double-concert album, At Carnegie Hall, recorded the previous year, didn't even make the Top 100. By this time, Melanie had withdrawn from the stage, and was devoting her time to more personal and domestic concerns, having the first of three children in as many years. She re-emerged in 1974 for a short series of concerts, but her new album of that period, Madrugada, barely made it on to the charts, and her subsequent two LPs, As I See It Now and Sunset and Other Beginnings, released in 1975, barely sold. Neighborhood Records was later closed down.

A year later, Photograph was released to lackluster sales on Atlantic; the follow-up, Phonogenic, also failed to chart, and her last album for the next five years, Ballroom Streets, appeared on the Tomato label in 1977. In 1982, Melanie cut a comeback album, Arabesque, for RCA; a year later, her single "Every Breath of the Way" scraped the middle of the British charts and led to a series of concerts in England. Neighborhood was soon reactivated just long enough for Melanie to release one last album, Seventh Wave.

At the end of the 1980s, she re-emerged once again with her theme music for the popular television series Beauty and the Beast. By that time, Woodstock nostalgia was beginning to be stoked by the media and concert promoters, and Melanie appeared at one of the 20th anniversary events. She continued to periodically perform at clubs in the United States and larger festivals in Europe, where her association with the 1960s made her a major draw, and every so often released an album of new songs or re-recordings of her classic numbers.
by Bruce Eder 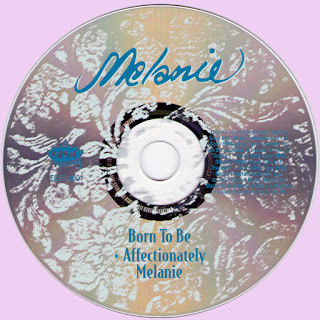