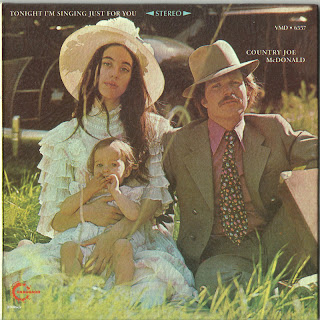 When Joe signed with Vanguard as a solo artist in-late 1969, after the Woodstock Festival, it was apparent that Vanguard wanted an album release as soon as possible. Joe had always wanted to do an album of Woody Guthrie songs he and Sam Charters worked out a schedule that got Joe to Nashville for the recording.

Sam booked a stellar collection of "players" from Nashville-Grady Martin on guitar, Norbert Putnam on bass (who later collaborated with Joan Baez on "Blessed Are" which featured the hit "The Night They Drove Old Dixie Down". When "Thinking of Woody Guthrie" (VSD 6546) was finished, a lot of studio rime remained, so Joe and Sam decided to record a collection of Joe's favorite country songs using the same "Nashville Cats" — who had been booked for the time anyway.

Joe grew up in El Monte California, in the Valley near Los Angeles. Country music was popular and some of the songs on this album were hits in the 50's and early 60s. Songs like "Six Days On The Road" and "Ring Of Fire" were all over the airwaves when Joe was growing up. Notable on three of the tracks are the Jordanaires, the gospel tinged group that recorded and sometimes toured with Elvis Presley.

This album coming from Joe in early 1970, confused many fans and critics, as the country music world was very supportive of the War in Vietnam and this collection coming from such a pivotal figure of the anti-war movement seemed rather incongruous. It was however a true representation of a portion of his musical roots and has for the most part stood the test of time.
by Bill Belmont, Berkeley, June 2001 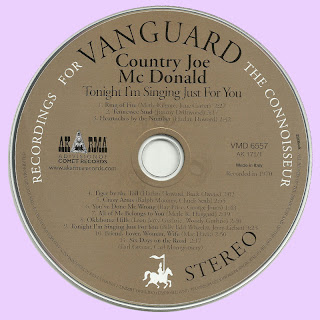