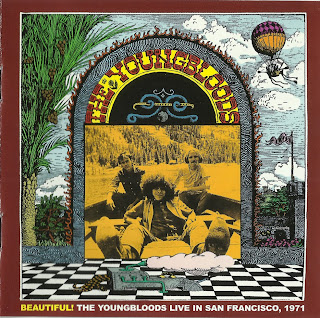 Recorded live at Pacific High Recorders in December 1971 for radio broadcast on KSAN in San Francisco, this is a fine-sounding document of the Youngbloods playing live shortly before their breakup. It does catch them a little past their prime -- most of the songs are from their later career, not their better, first half -- and the energy's a little lower than it was during their best folk-rocking days in the late '60s. There's also a greater tilt toward rootsy country and blues sounds than there is toward the folk-rock-pop that distinguished some of their finest earliest work.

Still, the band does play well here, and Jesse Colin Young's distinctive tenor voice and Banana Levinger's equally distinctive jazzy electric piano are both in fine shape. There's also the bonus of a few songs that didn't make it onto the Youngbloods' albums, including a cover of Dave Dudley's country trucking classic "Six Days on the Road," the folk song "Old Dan Tucker," and the Young original "Country Home," which he'd record on an early solo album. The highlights are still the original pieces in which they combine folk-rock and laid-back jazzy psychedelia, including the hit "Get Together," a version of which closes the set.
by  Richie Unterberger

By the time the Youngbloods, always crowd faves at the west coast ballrooms, performed live for San Francisco’s free-form radio pioneer KSAN in 1971, they’d honed their set to a fine gloss. Featuring the smooth as apple-butter voice of Jesse Colin Young and the guitar/keyboard wizardry of Banana, backed by the rock-solid bass-and-drum tandem of Michael Kane and Joe Bauer, the Youngbloods positively sparkle here. We’re elated to present a lengthy, previously unissued 13-song set that’s equal parts rocking R&B, dreamy jazzers and honky tonk flag-wavers, with just a little bit of psychedelic weirdness—topped off, of course, by a knockout version of their generational anthem, “Get Together.” The Youngbloods: at the top of their game, making it all look so easy—and so damn beautiful. - See more at:
Sundazed 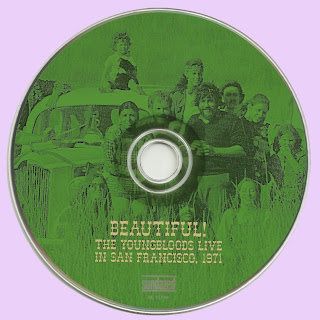