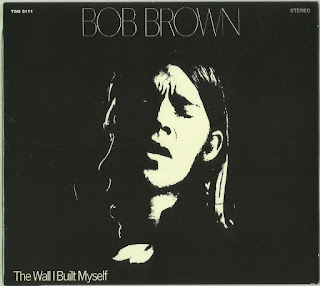 Spontaneity drifts through The Wall I Built Myself, Bob Brown’s 1970 debut album. The D.C. folk artist’s distinctive chord changes animate his music. And, although these lilting, gorgeous songs were recorded decades ago, it feels like Brown is sitting next to you playing live. Iconic Woodstock opener Richie Havens captured Brown’s intimate performance and free-flowing dreamy style when he produced the LP, which he released on his MGM label, Stormy Forest.

Brown met Havens in the summer of ’66 when he saw the ascendant folk hero at the Newport Folk Festival. It was Brown’s second trek to the illustrious musical communion. He returned after a life-changing experience the summer before when Bob Dylan beguiled thousands playing “Maggie’s Farm” atop a wooden box in a field. “The feeling in the air was mystifying,” says Brown. And after discovering the three musicians he considers his mentors—Tim Harden, Eric Anderson, and Havens—Brown was inspired to pursue his music career.

Havens would help Brown achieve that goal, and it started back at Newport in ’66. “I stood a couple feet away from Richie and had a funny feeling,” says Brown. About a month later they connected in Provincetown. Brown was hitchhiking through the Northeast to play music, and he caught Havens at the famous Blues Bag coffeehouse. “I was blown away by Richie,” says Brown. The next day, the pair sat on the beach and exchanged songs.

Years later, while at the University of Maryland, Brown called Havens for legal advice regarding a deal with Mercury Records. Havens convinced Brown to join Stormy Forest. “I got up to the Big Apple and was young and nervous,” says Brown. “We met on one of the top floors of the MGM building and ironed out my contract.” Brown signed on for two albums, The Wall and its follow-up, 1971’s Willoughby’s Lament. Although they received positive praise, Brown’s LPs eventually went out of print.

Brown grew up in Clinton, Maryland. His grandmother, Celeste, was a major musical influence. “I used to sit under her grand piano listening to Rachmaninoff, Ravel, Chopin, and Beethoven,” says Brown. “A lot of sensitivity around classical music and chord changes came from her.” Brown started on piano at age five and gravitated to folk music in junior high. He’d travel 30 minutes north to D.C. for concerts, learning from musicians like Judy Collins, Tom Paxton, and Peter, Paul & Mary. As a high school sophomore, Brown had already taken the stage at D.C.’s seminal folk coffeehouses—Through the Gates, Crow’s Toe, and the Iguana.

Brown’s exquisite but tough sound took shape while studying creative writing at the University of Maryland. He lived in a dorm called Garrett Hall, where he met Orin Smith, who played guitar upside-down and left-handed. Smith’s ingenuity fascinated Brown, and they teamed up. Smith introduced Brown to Joe Clark, a Peabody and Julliard trained pianist and saxophonist, whose classical background reminded Brown of his grandmother. Brown calls Clark his musical soul mate, and their mystical chemistry pushed Brown’s music toward a blend of folk, jazz, and rock. “This approach let us play off each other so that no two performances sounded the same,” Brown says. Clark later became the founder of The Entourage Music and Theater Ensemble.

Other influences came into Brown’s life during college. That’s when Brown met his first love and muse, Pamela. And Rudd Fleming, head of the university’s creative writing program, encouraged Brown to write both songs and poetry for class and pushed the young musician creatively. “Fleming helped me find my voice,” says Brown. The emotive work of Tim Hardin also affected Brown’s passionate singing and playing.

Davis Franks, a groundbreaking conceptual artist and poet, was another guide. Franks is well-known for his composition performed with tugboat whistles and sneaking into the Social Security Headquarters to Xerox his naked body. After meeting at Through the Gates coffeehouse, the pair collaborated on three songs for The Wall I Built Myself, including the startling opener “It Takes the World to Make a Feather Fall.” “David and I were competitive brothers,” says Brown. “He pushed me to be more hard-edged, and I pushed him to be softer.”

The Wall I Built Myself took shape against a backdrop of peace and free love of the ’60s counterculture movement. Brown’s solemn, lilting acoustic guitar and intense dynamic shifts on the album hint at the tense social and political climate of the era. Brown, Clark, and Smith recorded the album’s demo at the Cellar Door, the historic Georgetown club that elevated the careers of luminaries like Neil Young, James Taylor, and Jackson Browne. Brown, a regular, opened for some of the finest musicians who performed there—Tim Harden, Eric Anderson, and Neil Young.

After playing around the D.C. area, Brown and his collaborators perfected their musical chemistry. The interplay of Smith’s unusual electric guitar, Clark’s shape-shifting piano, and Brown’s tender acoustic guitar and mysterious, powerful vocals gelled into a compelling sound tapestry. Brown and his band mates recorded The Wall I Built Myself live, lending the album its powerful sense of immediacy. The trio brought a few other musicians into the sessions, including bass player Marshall Hawkins.

Hawkins, who has collaborated with Miles Davis, Donny Hathaway, and Roberta Flack, connected with Brown on a spiritual level. “Bob was very gentle, so we became good friends almost instantly,” says Hawkins. “Marshall’s style of playing was impressive to me and fit our musical style,” Brown says.

Brown and his collaborators recorded The Wall I Built Myself at Mira Sound Studios on West 57th Street in New York, with sessions running from noon to midnight. Amtrak carried Brown and his band back and forth between D.C. and New York, where Brown stayed at the famous Chelsea Hotel. When the sessions ended, Brown and his muse listened to the final mix in a sleeper car on a snowy train ride back to D.C.

The Wall I Built Myself offered a proper, engaging introduction to Brown. Producer Mark Greenhouse, who met Brown through the Iguana coffeehouse, says the record “nailed him.” “Bob Brown’s music is important both intellectually and artistically,” says Greenhouse. “I’m amazed by its power, beauty, and spontaneity.”

As Brown’s music career faded, he found his way into the service industry. He’s since become a consultant, trainer, and keynote speaker, which takes him around the world and led him to his wife, Judith. But Brown’s musical legacy never faded. Even though his two LPs went out of print, they are collectors’ items cherished by refined crate-diggers.

Tompkins Square has rescued The Wall I Built Myself and Willoughby’s Lament from oblivion with these official reissues. More than 40 years have passed, but the albums retain the spark that made Brown’s work so irresistible. The records also carry the spirit of Brown’s close collaborators who have passed—Joe Clark, Orin Smith, David Franks, and Richie Havens.

Together they bring the work of Bob Brown to life and let the world continue to experience his special brand of magic. “Bob is a pure and simple artist, who creates something powerful from nothing,” Greenhouse says.
by Leor Galil 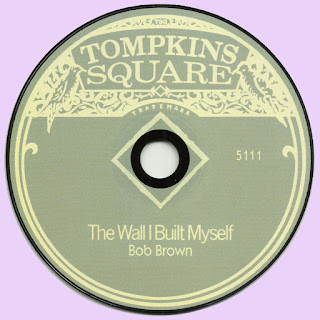 Free Text
the Free Text
Posted by Marios at 8:33 AM 3 comments: