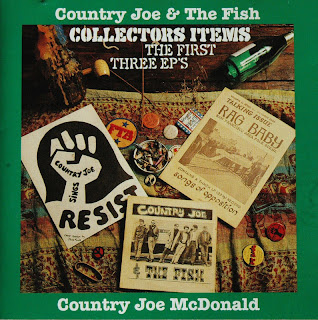 This collection of songs represents the very first successful American attempt to use a record propaganda and promotion. In 1965 Joe McDonald was to have performed a a demontration to protest the draft in Oakland, California, to politicized his audience, he and his then (and sometimes current) associate Barry Melton and Ed Denson (Kicking Mule Records) decide to form a jug band to accompany them at this event. They asked along some musicians they knew through Chris Strachwitz (Arhoolie Records) to record two songs for this record, as he had recording equipment and a way to get the records pressed.

They recorded two songs, "Superbird" and "I Feel Like I'm Fixing To Die Rag", a young songwriter from the Bay Area, Peter Krug recorded "Fire IN The City" and "Johnny's Gone Th The War" which were added as b-side.

This record was conceived  as a "talking" edition of Joe's magazine RAG BABY. They called themselves Country Joe And The Fish, a name which was arrived at as compromise to Country Mao and the Fish (as in the Mao saying regading the "fish that swims in the sea of the people") since they were in effect to conceived as agit-prop group. This "record" and the appereance in Oakland led to requests for them to appear as a band and their emphasis slowly shifted from an acoustic jug band to an electric "Rock" band playing a brand of what later came to be called :Psychedelic Music".

To promote themselves as an "Electric Band" and maybe make some money, they again formulated and recorded another EP. This was recorded at Sierra Sound Studios in Berkeley, California and formally astablished the existence of the RAG BABY Label. This EP numbered 1002 with its distinctive cover (by Berkeley artist Tom Weller) became one of the most identiflable of the many locally produced items from the San Francisco Bay Area, in the late 1960's. It was released in June of 1966, sold for $1.00. It certainly achieved notably as a collector's item, for established the band in New York long before they ever appeared ther and was available in record and "head shops" as far away as London. It contained three songs "Section 43", "Thing Called Love" and "Bass Strings".

In 1971, Country Joe again decided to mix commerce with politics and EP's. Then working with Jane Fonda and Donald Sutherland in a political musical revue they did shows for GI's to draw attention to the war in Vietnam. This FTA (Free The Army) Show was presented at "alternative" coffee houses (with names such as "Oleo Strut") that became centers for ant-war activism.

One of these in Mountain Home, Idaho was burned to the ground after their appereance there. Joe made another record that would contain material relevant to this period and songs that performed in the show. The third EP (RAG 1003) contains "Tricky Dicky", "Free Some Day" and "Kiss My Ass". They were recorded at Jack Leahy's Funky Features Recording Studiuo in San Francisco. The record was to have sold for $1.50 to raise money for the show and the VVAW (Vietnam Veterans Against The War), but some were burned, some were lost in transit and others dissappeard. It was probably more political than the first one as it went directly to the point, it received considerable airplay, however on what were then known as "progressive" FM radio stations. 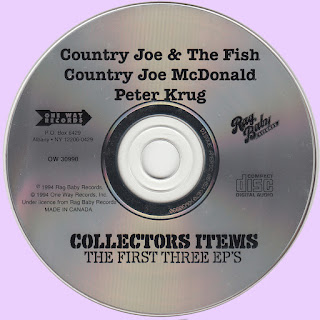