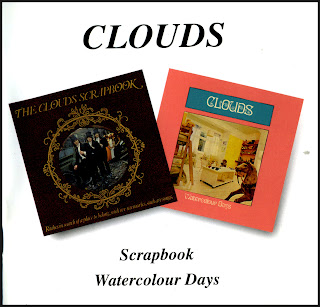 Clouds were a promising psychedelic-cum-prog-rock band who never found the commercial success to match their critical raves. In contrast to most of their contemporaries and rivals who hailed from England, the trio's roots were in Scotland and trailed back to the mid-'60s. Ian Ellis (vocals) and Harry Hughes (drums) originally teamed up as part of a Brit-beat band called the Premiers, formed in Edinburg in 1964. They were a conventionally configured quintet with bass, two guitars, and drums behind Ellis' vocals. Sometime later, they added Billy Ritchie on the organ, and they were good enough.

It was decided that an organ would help the sound of the band, and Billy Ritchie joined. Bandleader/producer Cyril Stapleton recorded a few sides with the group in London but was unable to interest any record companies in their work, and it was at that point that the band disintegrated, leaving Ellis, Ritchie, and Hughes, who decided to go it alone as a trio, with Ellis taking over on bass in addition to his singing. They also took on a new name, 1-2-3, and began writing their own material, all in a decidedly psychedelic mode -- coupled with their new sound, they soon found themselves lacking an audience in Edinburg, and headed for London, believing (correctly) that they'd get a better hearing there.

They began building a cult audience among general listeners and a respectful following among their fellow musicians after a series of shows at the Marquee Club. At the time, there weren't too many organ-based trios around -- even the Nice still had a lead guitarist when they started out, but Ritchie's playing and their overall sound began to attract serious critical attention. And they were signed up by Brian Epstein's NEMS management company in the spring of 1967, an event that got them as much exposure as their music. The NEMS connection died with Epstein that summer, however, and it was back to the London clubs for the trio.

Lightning struck a second time when Terry Ellis, a young, aspiring manager and producer, saw them at a gig and signed them up. Ellis and his partner Chris Wright had a management company called Chrysalis, which would eventually turn into a record label as well (subsequently sold to EMI), but at that time they didn't have a label. As a result, the group -- now rechristened Clouds -- was signed to Island Records. They also got to tour America, where the critical reception was more than enthusiastic, coming off of shows in Chicago and New York (the latter at the Fillmore East). Their debut album on Island, entitled Scrapbook, was a quasi-concept album, with beginning and end pieces and an array of songs that ranged from psychedelic pop to spaced-out, highly progressive and experimental art rock. Island put their work out in front of the British public throughout 1969, on singles and sampler albums, and heavily promoted their debut, and the critical response was highly favorable, as were their concert reviews.

All wasn't well between the trio and its management, however -- Chrysalis had made a decision to devote its efforts and promotional budget to a rival act, Jethro Tull. Gradually, Clouds got lost in the shuffle and their recording activity was somewhat confused, between England and America -- in the U.S., an album called Up Above Our Heads appeared on the Deram label, while in England a second LP, Watercolour Days, was issued, showing up in 1971. Clouds called it quits late that year, their moment having past. Their albums lingered in cut-out bins well into the 1970s, however, and based on the CD reissue activity of the 1990s and beyond, including a collection from Universal Music in 2007, indications are that someone out there is still interested in their work, 30 years after their debut release. ~
by Bruce Eder 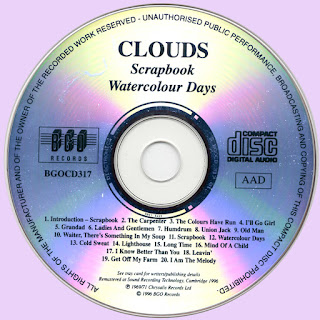