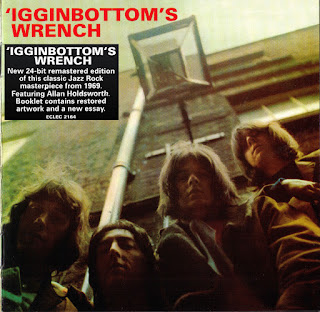 This is one weird-ass album, and one that will probably become better known as time goes on and more people discover that it's a very early musical document of Allan Holdsworth — he was part of 'Igginbottom's Wrench along with David Freeman on bass, Steve Robinson on the other guitar, and Mick Skelly on drums. 'Igginbottom's Wrench, their one and only album, bears about the same relationship to Holdsworth's later work that The Cheerful Insanity of Giles, Giles & Fripp does to Robert Fripp's work, and it's curious that both albums are on the same label. 'Igginbottom's Wrench also sounds a lot like GG&F, kind of arty, theatrical psychedelia with some prominent jazz influences weaving in and out, but none of it taken seriously enough to be played or sung especially well, and it's easy to see how this recording got overlooked in 1969.
It's mostly notable for the presence of "Golden Lakes," which evolved into "Velvet Darkness" and loomed ever larger in the decades to come. This shows Holdsworth at his least precise and pretentious, not in great form instrumentally or vocally (but not bad, either), noodling around in a less-than-formal setting and calling it an album. It's great fun and it will probably delight Holdsworth's fans, and anyone into late-'60s progressive rock or jazz/rock fusion.
by Bruce Eder 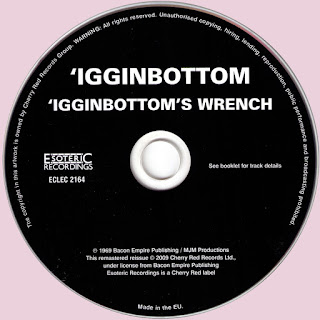