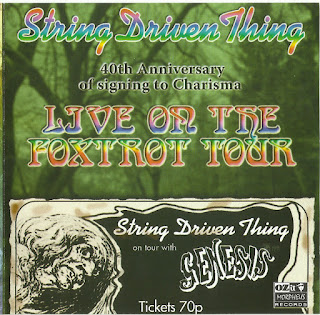 In fact, their second Charisma album ( and third release in historic terms) The Machine That Cried - originally released 1973- has since been acclaimed not, merely, String Driven Thing’s masterpiece, but one of the finest progressive rock albums of the entire era – its reissue a couple of years back on the British Ozit label was widely heralded as among the most intelligent re-releases of recent years. They are back again with this new CD 40 years later on the anniversary of them signing to Charisma.

On Dec 12th 1972, as Pauline Adams of String Driven Thing passed through customs at JFK Airport, in her suitcase was a full length orange dress. Nothing unusual in that, you might think, but the dress in question actually belonged to Peter Gabriel, to be worn at the climax of Genesis’ Foxtrot set which they were about to debut in New York’s Philharmonic Hall. For both bands, this was a first visit to the States, but whilst Genesis were classic Charisma Prog Rock, String Driven Thing were far harder to pigeonhole. Drummerless, and with a virtuoso lead violinist, they had just released their eponymous album to enthusiastic reviews and their first single “Circus” was already a turntable hit, so there was a real buzz in the city about both bands. On the night, the auditorium was packed and, unusually for a support band, the Thing were brought back for a rapturous encore.

Listening to this free blowing high octane set forty years on, it’s easy to see why. Fast forward six weeks, and the UK leg of the Foxtrot tour is due to start at London’s Rainbow, only in the interim, frontman Chris Adams has suffered a spontaneous pneumothorax (collapsed lung) and is rushed to hospital, where Doctors recommend that he take four weeks rest to let his lung reflate. But unwilling to drop out of the impending tour, Chris elects for the alternative treatment which, in his words involved “watching a brace and bit being used to drill a hole through my chest”.

14 days later, and against doctors’ advice, the band took to the Rainbow stage and, although understandably not being quite at their best, in the following gigs, including Manchester Free Trade Hall where this recently unearthed recording was made, the band performed sets with such stunning energy that multiple encores became the norm. Just listen to the 16 minute version of Jack Diamond and Graham Smith’s incredible virtuosity as he swoops and weaves around the hypnotic groove of Chris’ guitar, Pauline’s percussion and Colin Wilson’s subtly syncopated bass, and I think you’ll agree with me that Ozit has rediscovered a lost masterpiece.
String-Diven-Thing 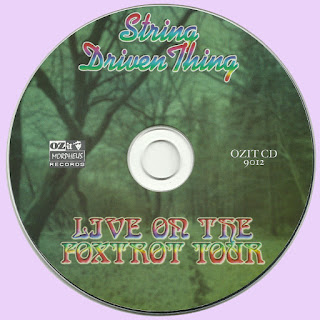 Free Text
Just Paste
Posted by Marios at 4:30 AM 8 comments: