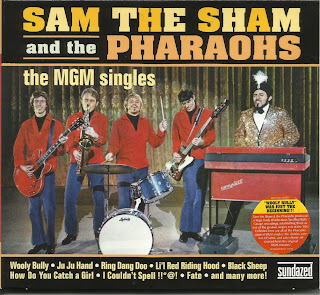 These days, Sam the Sham and the Pharaohs are best remembered for such infectious ’60s hits as “Wooly Bully” and “Lil’ Red Riding Hood,” and for the sartorial splendor of turbaned frontman/organist Sam the Sham (née Domingo Samudio) and his bandmates. But the one-of-a-kind Memphis-by-way-of-Texas quintet produced a large and highly original body of R&B/blues/Tex-Mex/garage tunes that established them as one of the greatest singles bands of the 1960s. While the band’s wacky humor and flamboyant visual image may have threatened to brand them as a novelty act, their raw exuberance, rootsy grit and playfully subversive streak made it clear that Sam and his Pharaohs were the genuine article.

Throughout the second half of the ’60s, Sam the Sham and the Pharaohs turned out a lengthy string of killer seven-inchers. Many of those singles boasted non-album B-sides that were as memorable as their better-known A-sides. Now, for the first time ever, Sundazed Music has gathered both sides of every one of the band’s original MGM Records singles on these lovingly packaged compact disc collection. The sizzling set includes such immortal Pharaohs classics as “Wooly Bully,” “Lil’ Red Riding Hood,” “Ju Ju Hand,” “Ring Dang Doo,” “Red Hot,” “The Hair on My Chinny Chin Chin,” “How Do You Catch a Girl” and “(I’m in With) The Out Crowd,” along with an amazing assortment of rare non-album B-sides, solo efforts and side projects. These long-out-of-print gems have been sourced from the original MGM masters and sound better than ever!!!
Sundazed

Formed in Dallas and led by a dynamic turban-wearing lead singer and organist named Domingo Samudio, Sam the Sham & the Pharaohs were a garage bar band gone huge (it has been long rumored that they could play six hours straight without repeating a tune), and by mixing blues, R&B, and Tex-Mex together with a loopy sense of humor and sly lyrics, they stomped into pop history with the iconic party anthem “Wooly Bully,” which hit the number two spot on the pop charts right in the middle of the British Invasion in 1965.

Aside from that record, though, and “Li’l Red Riding Hood” a year later in 1966, the group wouldn’t have that kind of chart success again, and Samudio and his band went down into most people’s annals as a one-hit wonder. This irresistible set, which collects all of the Pharaohs’ singles and B-sides for MGM Records between 1965 and 1968, plus Samudio's 1973 comeback single for the label (he had left MGM for Atlantic in 1970, only to return for that one release), proves there was a lot more to the story. 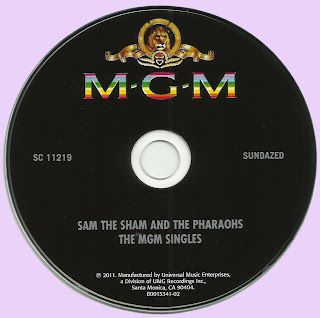