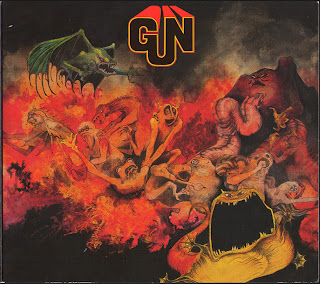 Led by brothers, Adrian and Paul Curtis nee Gurvitz, Gun was a shortlived hard rock trio in the vein of Cream and the Jimi Hendrix Experience. Comprised of guitarist/songwriter Adrian, bassist/lead vocalist Paul, and drummer Louis Farrell, Gun recorded only two albums in their short career-span of 1968-69, and Beat Goes On Records has compiled both lps onto this single 18 track, 75 minute disc.

Opening with the bands UK hit Race With The Devil the disc immediately lets the listener know that they are in for an all out assault on their auditory senses. Ranging from straight-out rock and roll to rather reserved ballads, and filled with plenty of psychedelic tinges, Guns recordings are never boring, and through the entire 75 minutes, Adrians guitar work remains crisp and interesting.

The highlight of the disc may well be Yellow Cab Man from the groups debut album, while the extended jam Take Off has lots of tasty bits from Adrian. The groups second album may be somewhat less inspired than the debut, but it still contains loads of interesting guitar work.

The Curtis brothers began using their birthname Gurvitz not long after the demise of Gun, and went on to record 3 albums as the Three Man Army and later an additional 3 lps with former Cream drummer Ginger Baker, as the Baker Gurvitz Army. While the Gun albums may not be the work of the most original band, the guitar work of Adrian Curtis (Gurvitz) alone makes for enough listening pleasure to make the purchase of this disc worthwhile.

This album's front cover was the first designed by Roger Dean. Musically, it was very much part of the first wave of British hard-rock. 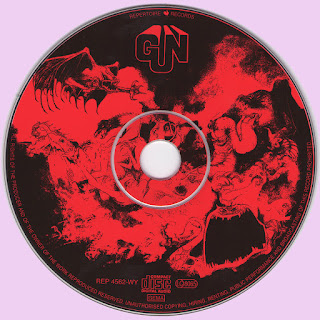