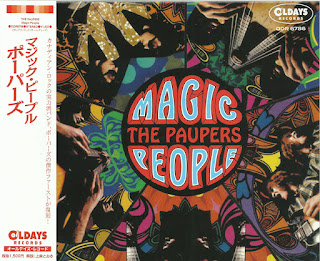 In 1967 the great band from the North released their debut record. The Paupers, along with the Guess Who, were one of the first Canadian bands to capitalize on the British Invasion. They started releasing singles in 1965 with a lineup consisting of Denny Gerrard (Bass), Skip Prokop (Drums), Bill Marion (Guitars) and Chuck Beal (Guitars). Prokop and Marion handled all the songwriting chores on their first clutch of singles.

Their early sound was a classy mixture of roots music, blues and folk-rock (think early Byrds or Lovin’ Spoonful crossed with the Blues Project circa 1965). The band began rehearsing 14 hours a day, honing their setlist and evolving into one of the tightest bands around. They hit the hip Yorkville District of Canada, playing to packed out venues daily and in return this gained them immense popularity.

Rumor has it that the Paupers blew the mighty Jefferson Airplane off stage one night. In 1966/1967, Bill Marion exited the band for reasons unknown, prompting the Paupers to recruit Adam Mitchell. Mitchell (guitar and vocals) proved to be an excellent songwriting partner for Prokop, and at this point the band set out to create their debut lp.

Magic People has a good mid 60’s sound and is anchored by the band’s folk-rock leanings. There are a trio of good psychedelic sunshine pop fuzz rockers on the record. These songs, Magic People, It’s Your Mind and Think I Care, are highlighted by Prokop’s distinct drum patterns, special guitar effects, and great raga soloing. The only dud on the album is One Rainy Day, which is a jaunty good time Lovin’ Spoonful rocker. The remaining six songs are good to great folk-rockers, that recall the Byrds, Buffalo Springfield and the Beau Brummels.

The catchy You and Me feels like a throw back to a 1965 Byrds or Brummels folk-rock sound. Tudor Impressions is excellent, reflective, and abstract, including horns, sparkling accoustic guitars and a Beach Boys-like harmony pop ending. Black Thank You Package and My Love Hides From Your View have a great outsider feel. Black Thank You Package has a distinct, exciting intro and a catchy chorus while My Love Hides is an absolute haunting masterpiece of acid-folk.

Later on in the year the band would play at the seminal Monterey Pop Festival. Everything that could go wrong for them did. Band members took doses of acid that were way too strong and had equipment/sound check problems. Thus, it was the beginning of the end for the Paupers, a group of individuals who had began with so much promise. In 1968, beneath all the internal turmoil, the Paupers were able to squeeze one more lp out. Ellis Island is a little mini psychedelic gem and fans are strongly urged to check this great album out as well.
by Jason Nardelli 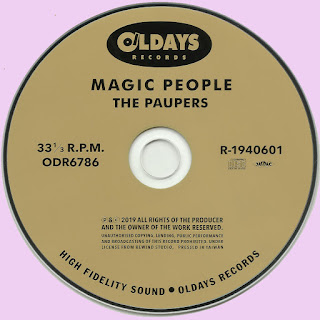