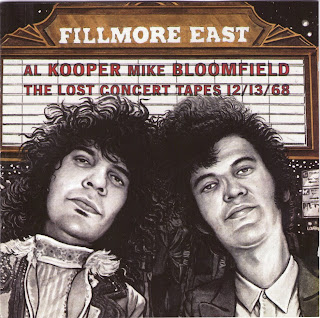 You could tell the way the concert started, how it was gonna be. Bill Graham, took great pleasure in introducing each act, from the side of the stage, in shirtsleeves.When we were all in place, the crew gave him the nod. Michael said: "Wait a second—I wanna say something!" Where upon, our pianist, Paul Harris replied to Graham"Michael wants to say something..." In that instant, Michael had traversed the stage and grabbed the microphone right out of Bill Graham's grasp and proceededinto one of those Bloomfieldian speeches of his. Graham just stood there perplexed,eventually grinning at Michael's bluecollar blurb.

When Michael finished, he politely dumped the microphone back in Graham's hands and headed back to his guitar. Graham introduced us in one sentence and we were off and running. Now 33 years later, it's my turn for the introductions. This was atypical Bloomfield-Kooper gig. Michael showed up sick as a dog withthe flu, two days before the show. I had put the band together this time. Jerry Jemmott was a master NYC session bassist and wasbest known for his recent work with Aretha Franklin. Pianist Paul Harris was my homey from Queens, who inherited all my studio work when I joined The Blues Project. John Cresci, was introduced to me by my good friend Charlie Calello and had played drums on the last two sessions for my first solo album, "I Stand Alone." I didn't know John very well, but he seemed like the right choice.

We rehearsed for two days, and Michael managed to give Paul his flu. It started to become noticeable that Cresci might not have been the proper choice, as he seemed to not have logged much previous time playing Chicago-style blues, which is mostly what we performed. He & Jerry Jemmott kinda musically fought for where the groove belonged and that sort of subliminal feuding doesn't make for the best band chemistry. It was, however, just too late to make any personnel changes, and so I just hoped for the best.

Prior to the first set the first night, Michael burst into the dressing room with this really wild looking guy in tow. His name was Johnny Winter, and Michael had heard him play in Chicago a coupla years before and knew he was good. Steve Paul, owner of the musician-hangout-club The Scene on West 46th Street, had just started managing Johnny, and I had heard good things about him, but had never met him til just then. Michael planned to bring him onstage to jam and I trusted his decision without having heard Johnny before. So we went out, Michael made his first speech of the night and we played "OneWay Out."

I noticed right away how "on" Michael was, and I was excited because we were recording this show for a possible live album. Jerry & Johnny seemed to be doing okay and it looked like clear sailing. Right after the first song, Michael grabbed the mic again and introduced Johnny as Johnny 'Winters' and brought him right out to play. The opening-night audience, peppered with press and Columbia Records brass, had no idea who this wild-looking, long-haired, extremely white Texan albino was and it got tense real quick. Michael patiently counted out a slow Chicago blues groove and Cresci & Jemmott were at odds right at beat two of the first bar.

Michael began playing his opening solo and Winter stood there, almost coiled up like a skinny Texas rattlesnake, waiting to strike. After Michael's solo, Winter stepped up to the mic and began to sing in an amazing voice that just didn't go with his frail body. After the first line of the verse ("It's My Own Fault, Baby"—a B.B. King chestnut) he fired off a sharp staccato blast of vintage Chicago-style guitar. The crowd leaned forward, and rows of jaws began to drop. This was the largest, most important audience young Winter had ever performed in front of, and he was virttually playing for his life.

By the time he had sung a few verses and spun out a blistering guitar solo, the crowd was his. He graciously stepped back and gave Bloomfield the nod to solo. Michael stepped up in a very competitive situation, and slowly began to play his little heart out. But he didn't play any of the traditional licks that Winter had just strutted out for six minutes—he played pure vintage Bloomfield. Drummer Cresci, probably bored out of his gourd after playing over six minutes of slow blues, moved into a completely inappropraite % time waltz groove and pretty much extinguished Michael's momentum.

Winter, gingerly tried to help by playing harmony with Michael, but it was too late. Michael stepped back and Winter sang the last verse, played a brilliant two minute cadenza and left the stage to a standing ovation. This was a Friday night. On Monday morning, Columbia Records brass who had attended the show offered him a lucrative recording contract which he eventually signed, and the rest, as they say, is history.

Meanwhile, back at The Fillmore East, we were only on our third tune. Michael was having an amazing night. We played Simon & Garfunkel's "59th Street Bridge Song," Michael's slow blues "Tell Me Partner," Albert King's "Don't Throw Your Love On Me So Strong," Steve Winwood's version of "Til The End Of Time," Arthur "Big Boy" Crudup's Elvis cover "That's All Right, Mama" and a ragged version of Donovan's "Season Of The Witch," originally tweaked by Stephen Stills on the original Super Session album.

Recording at the Fillmore was always risky business. Bill Graham rarely allowed a proper recording truck outside the premises, so gear had to be set up under the stage, a less than ideal acoustical location for recording. Crude spy cameras and monitors afforded the engineers a narrow view of what was actually going on up there, and spontanaiety was the engineers enemy. When Johnny Winter appeared unannounced, his guitar was nervously chosen to share the piano track in this eight channel world that existed in 1968. Interminable ground loops persisted, causing buzzes worse than the largest beehive.

When the original sessions were concluded, the tapes laid, unplayed, in the Columbia vaults for 32 years. It was decided between the engineering gaffes and the Cresci/Jemmott battles, that this show was not fit for human consumption. As of 20 years ago, the tapes sunk into the "missing" category. Many attempts to locate them over the years proved futile. In 1999, I began workin on a box set that would come to be known as Rare & Well Done. In the course of raiding the Columbia vaults under various namechecks: Kooper, Bloomfield, Kooper-Bloomfield, etc., the masters miraculously re-appeared. I couldn't believe it. Time had cut into my memories and I couldn't recall whether we nad recorded the show where B.B. King guested or Johnny Winter was introduced. I soon found out.

These tapes have been on a long, strange, journey. When we first re-discovered them, they had to be baked in an oven, an unceremonious but effective way to keep the Old oxide from peeling off all over the capstans of the playback machines. Then they were sent to the studios of Malcolm Cecil to be digitally debuzzed of all the ground hums, clicks and audio abberations picked up under the stage of The Fillmore East. Then I did some judicious editing to select the usable performances. Then the clarion call was sounded to my dear friend and uber-engineer Bill Szymczyk, who hosted us in Charlotte, North Carolina while he mixed this hornets nest of troubles & blessings at Reflection Sound. Finally, the mixed tapes found their way to Foothill Digital Studios in New York City, where the talented and erudite Allan Tucker, waved his mastering wand over it all and made that quantum leap to palatability.

So here we are. I have to say, some of this is as good as it gets for Bloomfield afficionados, and the rest still smokes most of the players alive today. After all, this is the man they learned from! The drama of Johnny Winter(s) playing for his life out there on the Fillmore East stage is almost visual and. an audible rare treat to be heard; not to mention, a historical one. Paul Harris, who is largely lost in the audio miasma does a fine job and pops up with a couple of fine blues solos. I didn't particularly have a great night, but I left it as it was  cause this is all about Michael. Jerry Jemmott does his level best to hold down the groove, while Johnny Cresci tries to figure out what the hell he is doing onstage with these ragamuffins.

This show contains dashes of humor, virtuosity, animosity and sheer joy at various random moments – sometimes all four at the same time! It ain't by any means perfect, but it sure is real and it's a pleasure to finally release it and make it possible to hear it as best as it can be heard. May the blues keep you kalm in these troubled times.
by Al Kooper, November 2002 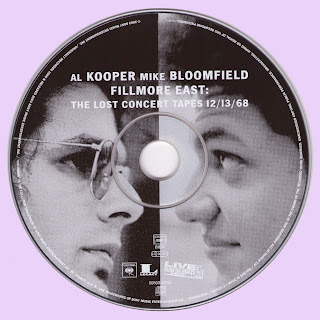