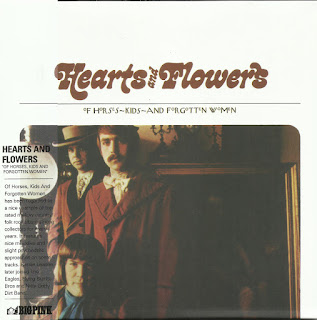 Hearts and Flowers released two good LA country folk-rock records in the late 60’s and left behind a plethora of outtakes. Of Horses, Kids and Forgotten Women from 1968 is arguably their crowning achievement. Larry Murray, Dave Dawson and Rick Cunha had made up the first lineup of Hearts and Flowers, all coming from an early to mid 60’s folk mindset. In the summer of 67 they released Now Is The Time For…. to critical acclaim. By the time of their second album Bernie Leadon of Eagles, Flying Burrito Brothers, and Dillard & Clark fame had replaced Rick Cunha.

Of Horses, Kids and Forgotten Women has a few strong covers in Highway In The Wind and She Sang Hymns Out Of Tune. The harmonies were radiant and the band preferred acoustic instruments over electric. Some of the compositions have attractive string, harpischord and horn arrangements. But it is the originals that really grab the ear.

Second Hand Sundown Queen, When I Was A Cowboy, Legend Of Ol’Tenbrookes and the beautiful Extra Extra medley are classy, early country rock songs that have definitely stood the test of time well. The sound here is very close to the quieter moments on Buffalo Springfield’s Last Time Around or even the Beau Brummels on their fabulous Triangle album.

Larry Murray’s Ode To A Tin Angel is the album’s undisputed classic. Tin Angel is a multilayered psychedelic epic that never forsakes Hearts and Flowers love for Americana.

It’s a superb, challenging piece of music that would not be out of place on Millennium’s Begin album. Hearts and Flowers never received their due because the music they created was ahead of it’s time.
by Jason Nardelli 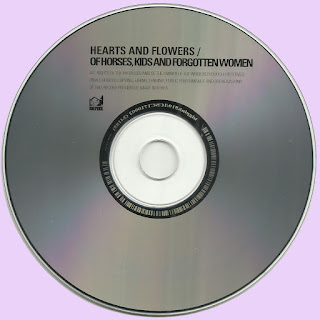 Free Text
Just Paste
Posted by Marios at 7:35 AM 9 comments: