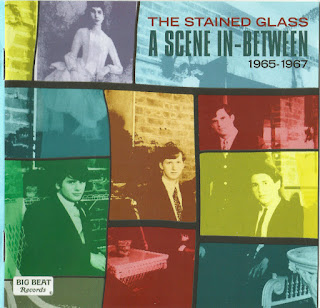 “A Scene In-Between” is the story of a group who fell through the cracks.An act with the Stained Glass’s capabilities should have been huge.Mid-60s San Jose, California had a thriving music scene, but was overshadowed by that of neighbouring San Francisco.

Compared to the garage stylings of the Chocolate Watchband or Count Five, the Glass boasted a quirky and melodic demeanour, one which captured the European beat group zeitgeist better than other local groups.

They had progressive and innovative material, the product of the fertile imagination of bass player Jim McPherson.A singular talent quite without compare on the local scene, McPherson threw musical curveballs that caught the ear, and pollinated each lyric with an intriguing worldview.These were not the thought processes of the typical garage band.

Jim’s songs also benefited enormously from the assistance of drummer Dennis Carrasco and guitarist Bob Rominger.The pair’s superlative vocal and instrumental capabilities drew out the melodic possibilities of the arrangements.Just as important was the founding member of the Stained Glass, Roger Hedge; without his drive the band’s repertoire may never have reached the general public.

The quartet began as the Trolls in 1964, issuing the fantastic punk item ‘Walkin’ Shoes’ themselves before a run of singles on RCA which included the pop-psych gems ‘My Buddy Sin’ and ‘A Scene In-Between’.Although the Glass later signed to Capitol for two albums, including 1968’s acclaimed “Crazy Horse Roads”, our collection focuses on their first incarnation, and presents the best of their released tracks from then, along with a swathe of exceptional unissued recordings that reveal their smart songwriting and innovative sound.Highlights include several sides cut as the Trolls; the rocking out-takes ‘Broken Man’ and ‘Bubble Machine’; intriguing demos such as ‘Second Day’ and ‘Revenge Is Sweet’; and some raw live tracks that further showcase their abilities.All songs are from master tape, and the heavily-illustrated booklet delves into the Stained Glass’ career with great detail.

There are some projects I have toiled at for years, waiting patiently for a break in which to move forward.This particular set has been in my mental In Box ever since I found a copy of ‘Walkin’ Shoes’ in an Oakland disc emporium, not long after moving to the Bay Area over a quarter-century ago.I subsequently located the other Stained Glass records, all of a high standard, but it wasn’t until I investigated their unreleased material some years later that I appreciated how special they were.As each year dragged on, patiently waiting for the various permissions required, I got to know the various parties: Jim McPherson’s supportive widow Evy, the affable Mr Carrasco and the erudite Mr Rominger.Then, as we moved into the home stretch, as if by magic the enigmatic Roger Hedge materialized from the ether.He not only handed me the long-thought-lost Trolls master tapes, but also spun tales of his days when he was a national badminton champion.

Thus with the release of “A Scene In-Between”, this long, strange trip has a most satisfying resolution.Jim McPherson’s aptitude was evident, confirmed by his later association with local SF rock heavies which included John Cipollina’s Copperhead and  a successful writing career for others such as Jefferson Starship.His work with the Stained Glass was viewed largely as an apprenticeship, his “baby pictures”, if you will.But the short few years documented on this collection reveal his one-of-a-kind talent was in full flower even at that early stage.And to a man, his fellow travelers: Dennis Carrasco, Bob Rominger and Roger Hedge brought that talent to life with their essential contributions.Any musician should be proud of baby pictures such as these.
by Alec Palao 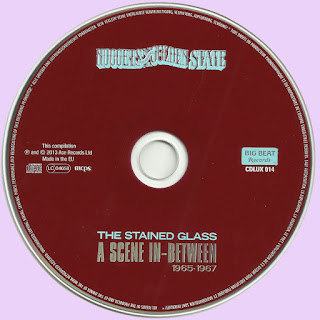