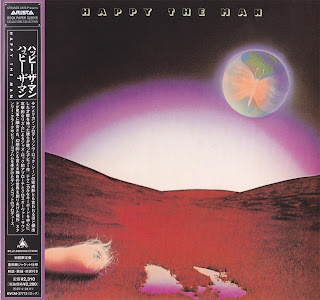 Though it met with little commercial success, Happy the Man's 1977 debut quickly became a cult sensation with fans of prog rock. It's easy to see why: their sound combines a number of diverse influences in a distinctive manner, and their music is as complex and meticulously arranged as any prog album one cares to mention.

Unlike some popular prog acts, Happy the Man does not allow one instrument to take center stage or allow relentless soloing to dominate the songs. Instead, the focus is on complex interplay between the group's players: compositions like "Knee Bitten Nymphs In Limbo" and "Stumpy Meets the Firecracker in Stencil Forest" are built on the kind of mathematically complex yet playful instrumental interplay that is normally associated with Frank Zappa's most complex work. Elsewhere, the group slows down the instrumental pyrotechnics to show off a grasp of melody; the best example is "Starborne," which starts off with moody washes of Tangerine Dream-style synthesizer and builds to a dramatic, almost orchestral fanfare.

The one real downside of the album is the inclusion of two vocal-oriented songs that don't jell with the rest of the album because the group is obviously not comfortable dealing with conventional song structures. These selections also suffer from pretentious lyrics; for example, "On Time as a Helix of Precious Laughs" tries to philosophize about the meaning of life but gets bogged down in artsy, obscure imagery.

In the end, Happy the Man doesn't quite live up to its legendary reputation but remains a solid prog outing that will find favor with those who enjoy art rock at its most complex and ambitious. Collector's note: One Way Records' 1999 reissue of Happy the Man was remixed for the compact disc format by the group's keyboardist, Kit Watkins.
by Donald A. Guarisco 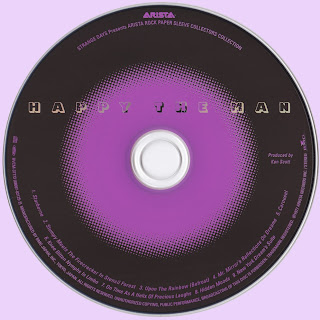