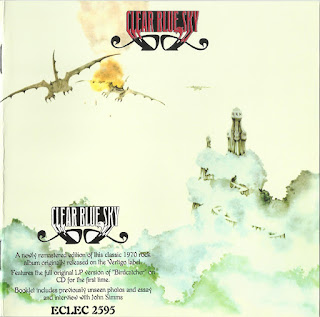 As the '60s gave way to the '70s in Swinging London, the colossal success of Cream and the Jimi Hendrix Experience was helping hard rock to become arguably the musical genre du jour, meaning there were literally hundreds of young British bands bent on following in their heavy footsteps, while testing the limits of those newly developed Marshall stacks. Needless to say, only a handful of those groups would go on to become household names (Led Zeppelin, Deep Purple, Black Sabbath, etc.), leaving dozens more to share in the remaining limelight (Uriah Heep, Budgie, Taste, Jethro Tull, etc.), and then hundreds more fighting over the leftover table scraps -- including the subject of this text, Clear Blue Sky.

Formed in the western London suburb of Acton by teenage school chums John Simms (guitar, vocals), Mark Sheather (bass), and Ken White (drums), the bandmembers tried on several different monikers (Jug Blues, Matuse, and simply X) while they tinkered with their Brit-blues foundation, gradually adding harder, psychedelic, and eventually progressive songwriting elements. Extensive touring across the U.K. and into Germany also helped them gel as a unit, and so the precocious trio was primed and ready to capitalize on the next big opportunity that came its way, taking first place in a talent contest at the legendary Marquee Club that resulted in an offer from Donovan manager Ashley Kozak to represent the group. And true to his power broker reputation, Kozak soon managed to secure a recording contract for the boys with adventurous EMI imprint Vertigo, which put the newly renamed Clear Blue Sky into Island Studios in the spring of 1970, right next door to none other than Led Zeppelin!

Another early believer, vocalist Patrick Campbell-Lyons, formerly of the progressive rock band Nirvana (no, not that Nirvana), was hired to produce the three 18-year-olds, and by January 1971 the eponymous Clear Blue Sky LP arrived in record stores, adorned with one of the first Roger Dean cover designs (although, in Europe, it was titled Play It Loud and given different artwork). Unfortunately, the record's edgy mix of proto-metal, post-psych acid rock, and burgeoning prog rock -- though enthusiastically praised by collectors to this day -- ultimately failed to distinguish itself from the embarrassment of heavy rock riches that marked this period in time. And despite consistent touring over the next few years, Clear Blue Sky's career slowly lost momentum -- along with their Vertigo contract -- until the old friends finally decided to call it a day in 1975.
by Eduardo Rivadavia 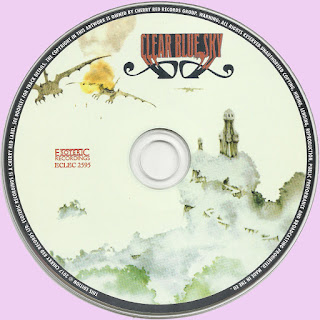 Free Text
the Free Text
Posted by Marios at 5:50 AM 10 comments: