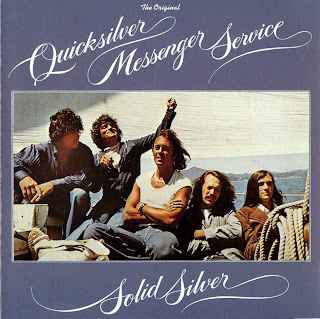 Although hopes were high that 'Solid Silver' might kick start the band's career, the reality was otherwise. Whilst the musicianship is excellent, the big problem with 'Solid Silver' is the lack of particularly inspired material. The songs struggle to reach a head of steam, and, although John Cipollina's distinctive lead guitar style is much in evidence, even he can't get overly worked up about it. 'Worryin' Shoes' is a blues shuffle by numbers, but its taken at quite a clip,which pushes the energy level up a few notches. 'Cowboy on the Run' isn't bad, a plaintive rock ballad with a heartfelt Valenti vocal. Other tracks such as 'The Letter' and 'They Don't Know' have their moments, but there's little of the old QMS frictional guitar sparks to lift the thing above the lightweight at best, or mundane at worst.

QMS toured to support the album, but neither the tour nor the album were a great success ('Solid Silver' made number eighty-nine on the Billboard album chart), and the band ground to a halt. Freiberg enjoyed rather more success as a member of Jefferson Starship. Cipollina died on 29th May 1989, from complications assocaiated with emphysema, aged forty-two. Dino Valenti sloughed off this mortal coil on November 16th 1994, aged fifty-seven.

Quicksilver Messenger Service remain a fondly-recalled, if ultimately underachieving acid-rock band. There's still a version of the QMS knocking about, featuring Gary Duncan on guitar, and of course, CD reissues of the band's albums have helped add lustre to their legend. 'Solid Silver' may not be the finest Quicksilver album, but it has its moments, and Cipollina was always a guitar player worth listening to. I hope you enjoy it.
by Alan Robinson 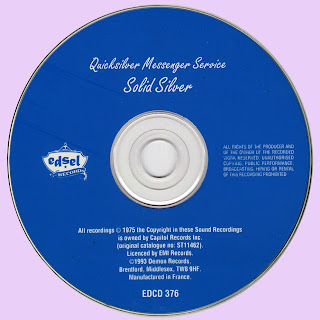 Free Text
Text Host
Posted by Marios at 8:27 AM 15 comments: