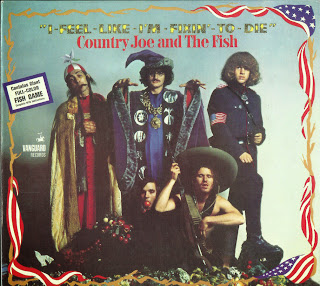 The first three Country Joe and the Fish albums all have distinct qualities. “Electric Music For The Mind And Body” was the band’s pioneering metaphysical debut. Their third album, “Together”, featured a democratically inclined potpourri of styles. In-between came “I-Feel-Like-I’m-Fixin’-To-Die”, a textbook example of how artist and producer can overcome a perceived shortage of material to create something of lasting value. Ironically, for a group with roots in the folk idiom, there were no acoustic guitars on “Electric Music”. Its sequel introduced these in a necessary fashion. While “Electric Music” represented the essence of the “plugged-in” Country Joe & the Fish, “I-Feel-Like-I’m-Fixin’-To-Die” delved back to the roots of the group’s players, yet still managed to stretch their horizons.

In the spring of 1967, Country Joe & the Fish resided at the cutting edge of the San Francisco psychedelic rock renaissance, and anticipation was high for the sequel to their influential debut. This was an era where a new album was expected every six months. By introducing other aspects of the Country Joe & the Fish musical make-up, “I-Feel-Like-I’m-Fixin’-To-Die” made up for any shortfall with its fresh perspective. Thanks to a rising profile, the group had confidence, so the new album, recorded during a residency in New York that summer, featured bold material that for the first time complemented their outspoken political stance, but in an appropriately humorous fashion. As one critic put it, Country Joe’s protest was delivered as “satiric comedies, not as invective … their power is precisely in the laughter and the release of tension they provoke.” None more so that the title tune, with its sarcastic anti-war message and the “Fish Cheer” intro which, thanks to a ruder in-person variant as well as a star turn in the movie Woodstock, guaranteed ‘The I-Feel-Like-I’m-Fixin’-To-Die Rag’ would become the number most associated with the act.

True, the commentary could be dark and biting, but there are performances on the record that are empathetic, touching and human. For an album that, as the participants recall, was essentially cobbled together, it bears a remarkable cohesion – perhaps less from the conceptual aspect producer Sam Charters saw as the way to salvage what was workable from the group’s repertoire than an overall deftness of touch that went against the grain at the time. The delicacy the group conjured up on tracks such as ‘Magoo’ and ‘Colors For Susan’ was without precedent in rock, and there is a thread of wilful nonconformity that runs throughout.

This deluxe reissue features Charters’ original stereo and mono mixes of the album, the latter available for the first time since 1967. Bonus cuts include an unreleased alternate mix of the title track (minus sound effects), while the deluxe 40-page booklet is stuffed with rare photos and memorabilia, and comes complete with a replica of the Fish Game, as included in original copies. Most importantly, “I-Feel-Like-I’m-Fixin’-To-Die” sounds better than ever. As Charters’ original sleeve note states, this is indeed “their own world, their own sound … their own music together.”
by Alec Palao 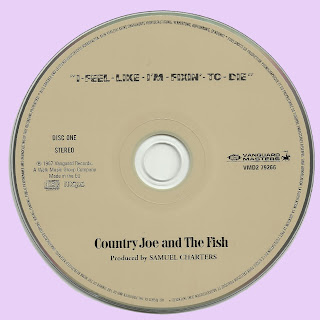 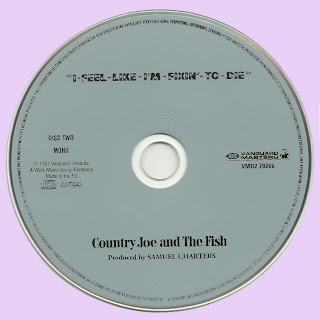 Free Text
Text Host
Posted by Marios at 7:34 AM 6 comments: