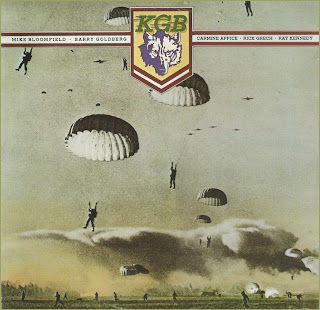 KGB were the supergroup of the supergroups, the creme de la creme, a mid seventies collective featuring of the most impeccable musicians in the UK and USA, they created a controversy, a mystique and a collectability that has endured and grown for almost 30 years. Even today, rumours persist that Grech's old mucker Stevie Winwood contributed anonymously to the recordings although no one has ever confirmed this. Released here for the first time on CD. Complete with the original sleeve artwork, it makes for fascinating listening, particularly since it reveals Bloomfield as a team player, one member of an allband effort. This may well have been dictated by his growing discomfort with celebrity. Given his gift for the guitar, he would ve been forgiven for running riot all over the album, but he doesn't. What he does do is tasteful and awe-inspiring.

On the opening track. "Let Me Love You", a Ray Kennedy co-wnte. his playing wheels and soars around the solid, funky structures, and there is no guitar solo. Nor is there one in the laid-back, pianolaced blues of Paul Rosenberg's "Midnight Traveler". Already, Kennedy's singing has stamped its character on the KGB. His is a soulful, blues-rock voice, confident and flexible enough to carry any song on its own. Sometimes he's joined by a group of female backing singers who are there to help build atmosphere and drama, or to add a gospel flavour where necessary.

Three tracks in, things get seriously strange with a cover of The Beatles' "Let It Be" track. "I've Got A Feeling". Bloomfield's piercing and eccentric guitar work in the intro continues throughout the song, an intricate and slightly mad arrangement of changing tempos and moods and vocal theatrics. It shouldn't really fit together as compellingly as it does. By contrast, "High Roller", written by Daniel Moore, is a gently rolling ballad with Bloomfield's guitar lines curling round the edges of the melody, while "Sail On Sailor" revels in its anthemic punchline and a full-blown orchestral outburst.

"Workin' For The Children", a reggae number cowritten by Bloomfield and Goldberg, fades out with a guitar solo, as does Kennedy's "You've Got The Notion". Here, a delicate, frosty opening gives way to an amiable swing that incorporates a steel guitar and some vivacious piano flashes. The guitar playing is barely noticeable on "Baby Should I Stay Or Go", another Bloomfield/Goldberg composition. Essentially, this is a vocal and piano epic, a spectacularly angst-ridden ballad. Funking things up again, "It's Gonna Be A Hard Night", written by Goldberg and Will Jennings, sees
Bloomfield playing along in the general, dancey melee, only taking the limelight towards the end with some trademark high-flying licks. "Magic In Your Touch", another Kennedy song, closes the album in shades of midnight blue, a moody, melodic, string-laden love song with a big slow burn to the climax.

Both Bloomfield and Grech left KGB after the album's release, and the group recorded another LP, "Motion", with replacement musicians before disbanding. Bloomfield carried on through the 70s with a series of under-achieving blues albums and film soundtracks while his health declined, allegedly due to drug abuse. In November 1980.

Bloomfield joined Bob Dylan onstage in San Francisco for a popular rendition of "Like A Rolling Stone", a song they had recorded together for "Highway 61 Revisited". Three months later, on February 15. 1981, Bloomfield, still in San Francisco, was found dead from a drug overdose. He was buried in LA- ironically, a city he disliked - and Goldberg gave the eulogy at the request of Bloomfield's family. Goldberg later declared: "I say a memorial prayer when the anniversary of his passing comes up. Not a day goes by when I don't think about him. He's still very much alive inside of me."
by Carol Clerk 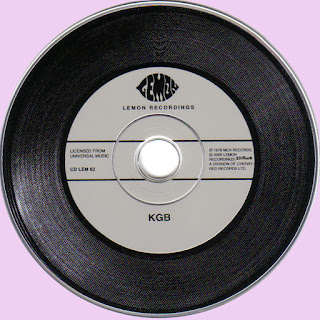 Free Text
Just Paste
Posted by Marios at 9:33 AM 10 comments: