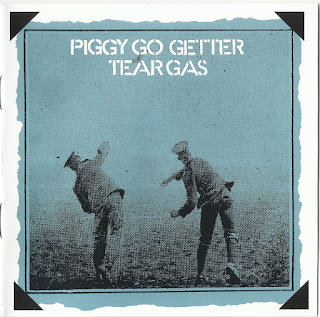 For Piggy Go Getter, Wullie Monroe, late of Ritchie Blackmore’s abortive pre-Deep Purple band Mandrake Root, replaced Lavis (who’d go on to play in Squeeze) and David Batchelor succeeded Mulvey. The band cut their teeth performing gigs all over Glasgow, performing originals and selections from Jethro Tull, Deep Purple, and The Jeff Beck Group (in fact, Tear Gas’s version of Beck’s “Jailhouse Rock/All Shook Up” medley appears on their self-titled album). Their live act caught the attention of Tony Calder, one of The Rolling Stones’ managers. He signed Tear Gas for the Famous Music label, a subsidiary of Paramount, and the group joined up with producer Tony Chapman and engineer Tom Allom to record their debut.

They set up in Regent Sound Studios, already a legendary space where The Rolling Stones had cut their first single, and where Black Sabbath had recorded their first albums. The band recorded for only a week, drawing from the originals they’d tested out in concert, and left the mixing to the engineer. The band never got the opportunity to hear (much less, approve) the final mixes before the album hit stores. With a lavish gatefold and two cartoon strips, the original LP was something of a deluxe affair. The cartoons are replicated in the comprehensive, 20-page booklet within Esoteric’s new edition, alongside detailed liner notes with interviews with band members and lyrics for each song for all to sing along to.

And for a band that idolized the likes of Zeppelin, Sabbath, and Jeff Beck, songs like “Nothing Can Change Your Mind” are head-scratchingly catchy, with a sing-along chorus and a surprising lack of shredding.  In fact, the light vocal harmonies, subtle organ, and Blood, Sweat and Tears-like verses wouldn’t be too out of place on AM radio.  “Lost Awakening,” meanwhile, sounds like an outtake from Dave Mason’s Alone Together, with blended acoustic guitar and and electric stabs underscoring a story of lost love before gliding into an extended wah-wah’d guitar solo.

“Living For Today” is a heavier, rollicking selection of riff-rock with impressively high harmonies, soulful lead vocals, and organ interjections that evoke early Deep Purple.  “Mirrors of Sorrow” explores similar territory, a song about loneliness and depression that’s juxtaposed with with catchy organ riffs atop “Hush”-like backing and a “Hey Bulldog”-inspired guitar riff.

While the album didn’t move many units back in 1970, it remains a curious collection five decades on – the work of a band with potential blending equal parts psychedelia and folk-rock, with ample blues influence, and some West Coast vibrations thrown in. While the guitar work isn’t as heavy on Piggy Go Getter as what was to come with their next studio effort, the band’s lyrics are fully formed and their arrangements retain a sense of dynamics that’s sometimes lost in other rock music of the time.

For all the recognition that SAHB has found in recent years, little has been written about Tear Gas and their two lone recordings remained hard-to-find for decades.  Esoteric has fixed that by presenting these newly remastered editions of Piggy Go Getter and Tear Gas for discerning fans everywhere.  With new remastering that faithfully serves the material, detailed liner notes (some repetition forgiven), and restored artwork, these two titles are a must for anyone looking to dig deeper into the rock scene in Scotland ca. 1970.
by Sam Stone, July 9, 2019 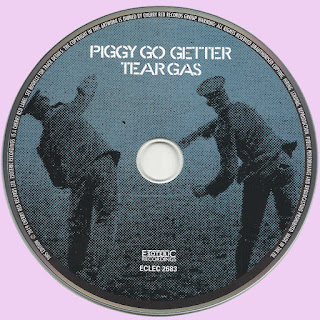