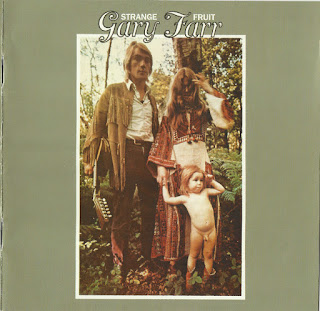 Gary Farr has one of the most distinctive r'n'b inflected voices of the early seventies British singer-songwriter. His second and finest solo album - 1970's Strange Fruit is an unjustly neglected gem amongst the many albums from that era and genre, A popular live performer in the mid-6G's clubs of centra! London, Farr had an enviable reputation as the leader of the T-Bones, by 1963 he had decided on a soio career founded upon his richly moody original Songs.

Gary Farr was the son of the former British Heavyweight Boxing champion Tommy Farr – the Tonypandy Terror - who in 1937 memorably completed 15 rounds with World Champion Joe Louis. After retiring from the ring Tommy settled his family on the Sussex coast. It was here the Gary began playing folk and blues music in pubs and clubs around the Worthing and Brighton area. In 1963 at the height of the "Beat Boom" he formed the fabulous T-Bones. The group was continually changing line-up, including short stints from keyboardist Keith Emerson and bassist Lee Jackson, both later to form the Nice. The band was a live sensation, securing a weekly residency at London's prestigious Marquee Club and replacing the Yardbirds as the resident band at London's Crawdaddy Club. The contemporary Fabulous magazine breathlessly reported - "Down at the Marquee Club in London's Wardour Street, there are long, long queues every Friday to see five swingers called The T-Bones."

A talented and popular live band, Gary Farr and the T-Bones released three singles and an EP (Dem Bones, Dem Bones, Dem T-Bones) on the Columbia label in 1964 and 1965. Their powerful, rhythm 'n' blues repertoire didn't translate too successfully to vinyl, never making the music charts. The band undoubtedly got their biggest exposure when their performance of "Wooly Bully" at the Richmond Jazz & Blues Festival in August 1965 appeared on American television's 'Shindig Goes to London'. Farr and the T-Bones are seen playing between slots by the much more celebrated Animals, Moody Blues, George Fame, and Steampacket (featuring future stars Julie Driscoll, Brian Auger, Long John Baldry, and Rod Stewart). The T-Bones struggled on for a further year before disbanding in late 1966.

Returning to solo gigs, Farr re embraced his folk roots, though the man who ran the Crawdaddy, Giorgio Gomelsky - who'd also managed the Yardbirds in their first few years - continued to be involved in the singer's career. An obscure 1967 bootleg recorded live in Sweden by the Gomelsky managed psychedelic band Blossom Toes, also features a solo acoustic Farr performing a couple of tunes, including a cover of Tim Hardin's "Hang on to a Dream". He briefly worked with Blossom Toes drummer Kevin Westlake, the pair issuing a single "Everyday" / "Green" in May 1968, before Farr released his 1969 solo debut Take Something With You also on Gomelsky's Marmalade label. The album was heavily influenced by contemporary folk and progressive rock especially recent recordings by Tim Buckley and Tim Hardin; sometimes having a memorable pastoral rock-jazz-folk feel a la Traffic. Curiously the album sits comfortably alongside label mate Gordon Jackson's Thinking Back (which boasted Traffic among the supporting players).

Turning in commendable performances on Farr's LP are members of two of the most inventive bands on the head circuit at that time - Blossom Toes and Mighty Baby (one of the great lost British psychedelic ensembles) had formed in 1968 from the ashes of The Action - a bunch of Tamla Motown influenced mods. They released two sought after albums, Mighty Baby – which appeared on the short-lived Head label in December 1969, (but had been recorded a year earlier) and A Jug Of Love (released on Blue Horizon in October 1971). The band were known for their ambitious improvised live sets and were in demand as session musicians, appearing on albums from Andy Roberts (Home Grown), Sandy Denny (The North Star Grassman ft The Ravens), Keith Christmas (Stimulus and Fable of The Wings), Shelagh McDonald (Stargazer) and Robin Scott (Woman From The Warm Grass) among many. Between their two albums, members of the band became Sufi Muslims. Keyboardist Ian Whiteman would appear on Richard & Linda Thompson's beautiful Sufi influenced Pour Down Like Silver, and with Roger Powell and Mike Evans would form the Thompson's backing band during a legendary 1977 tour of Britain.

Completing a circle in your humble correspondents brain - these three Mighty Baby stalwarts - Whiteman, Powell and Evans would also appear on Gary Farr's next album, 1970's Strange Fruit, which also includes Fairport Convention's Richard Thompson on lead guitar. Richard Thompson is arguably Britain's finest electric guitarist. A founder member of Fairport Convention - the band credited with inventing the British version of folk-rock. Their 1969 masterwork Liege and Lief has long been regarded as a milestone recording, defining British rock in the same way that Music From Big Pink was to define North American rock with traditional roots. It was this album that finally revealed the extent of Richard's talent as a songwriter – writing contemporary songs whilst drawing upon deep traditional modes. Throughout the early 70's Thompson was called upon to add his distinctive guitar to a bewildering number of recordings. Farr's Strange Fruit was one of his first studio sessions outside the Fairport / Witch season orbit and probably marks the first time he met the Mighty Baby rhythm section.

After the demise of Marmalade, Farr secured a new contract with CBS records. Work soon began on recording his second album. In his brief sleeve note, brother Ricky Farr reveals the high hopes that they had for the project. Ricky was the erstwhile manager of the Action and one of the promoters of the 1970 Isle of Wight Festival. This familial connection no doubt explains the presence of the three Mighty Baby's on the sessions and Gary's appearance at both the 1969 and 1970 Isle of Wight Festivals. Strange Fruit is notable for the contributions of several other young turks on the London music scene. The LP was produced by Fritz Fryer, a former member of the Four Pennies, who in 1970 was just beginning his career as a record producer. He would go on to establish the well-known Rockfield Studios in Monmouth producing acts as diverse as Stackridge, Skin Alley, Motorhead, Nucleus, Horslips and in 1973 Prelude's hit reading of Neil Young's "After The Goldrush".

String arrangements were written by a 21 year old Mike Batt, soon to achieve chart fame as a Womble. Sleeve photographer Eric Hayes from Canada was briefly in London working as house photographer for the London edition of Rolling Stone. He took the memorable photos of Fairport Convention rehearsing Liege ft Lief at Farley Chamberlyne. Strange Fruit is a compelling early example of a pastoral roots rock, there's an attractive melancholy atmosphere to many of Farr's performances. He's at his best when the compositions and arrangements are the folkiest - slightly recalling American songwriters Tim Buckley and Tim Hardin. Listening again, all these years later, one is left with the feeling that the album has been somewhat unjustly overlooked. Perhaps if he had spent longer with one record company the story would be different. Gary's final recording was the 1973 Jerry Wexler produced Addressed To The Censors Of Love (Atco), recorded at Muscle Shoals Sound in Alabama, using respected session men such as guitarists Jimmy Johnson and Pete Carr, keyboardist Barry Beckett, bassist David Hood, and drummer Roger Hawkins. Despite a slightly more soul-rock focus this album also failed to find favour with a larger audience. In only ten years of recording Gary Farr had navigated a fascinating journey through r'n'b, folk, blues and soul, essaying a fine body of "really valid songs for today". Sadly Gary Farr died in Los Angeles in August 1994.
by David Suff, November 2007 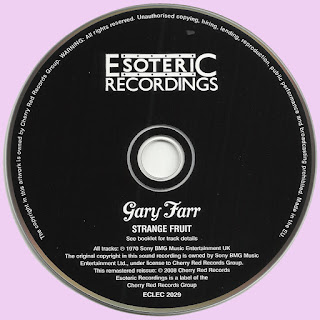 Free Text
Text Host
Posted by Marios at 7:01 AM 3 comments: