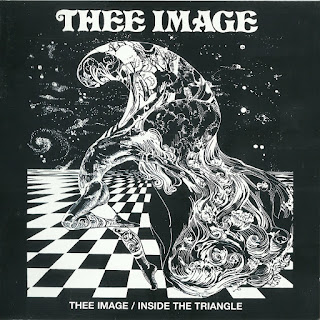 Thee Image were formed in 1973 by former Blues Image, Iron Butterfly and Cactus guitarist Mike Pinera and keyboard player Duane Hitchings, formerly with Buddy Miles. Pinera's first band, Blues Image scored a US hit with the single "Ride Captain Ride" and had begun life as the house band of a Miami rock club called Thee Image. Pinera's skill as a guitarist meant he was a much in demand musician. After a spell in a reformed line-up of the hard rock group Cactus in 1973 Pinera formed Thee Image with Duane Hitchings on keyboards and talented drummer Donny Vosburgh (who had also played with Blues Image). The band was signed to Manticore  in 1974 by Mario Medius who had known Mike Pinera from his time at Atlantic Records in New York whilst Pinera was a member of Iron Butterfly.

Thee Image recorded their self-titled debut album at Criteria studios in Miami, producing a work of polished and sophisticated rock. The album enjoyed a release both in the USA and Europe (where Manticore was distributed by WEA Records).

Although "Thee Image" failed to chart, sales were encouraging enough for Manticore to continue to support the band with the recording of their next album, "Inside the Triangle" in 1975. Once again recorded at Criteria studios in Miami, the band's second album was released in the USA only and arguably fell victim to ELP's waning interest in Manticore as an entity. In hindsight, Motown Records were perhaps not best suited to distribute and market rock music.

As result, despite gaining positive notices as a live act, sales of "Inside the Triangle" failed to live up to expectation and by 1976 Thee Image had cense' to exist. Mike Pinera soon embarked on a solo, career and would later work with Alice Cooper among others and remains a much respected and in demand session guitarist.

The demise of Thee Image seemed to pre-empt the demise of Manticore itself. Although the label was releasing some remarkable music by the middle of 1976 it was apparent that the label that had begun as a worthy outlet for the music of Emerson Lake & Palmer and other fine acts was swiftly becoming a burden. The harsh light of day revealed that aside from Emerson Lake and Palmer, few, if any of the other acts signed to Manticore had the commercial success hoped for them (with the possible exception of PFM). Greg Lake would later reflect; "At the beginning it was all very exciting having your own label, but quite soon we realized that it was a huge task running Manticore and also recording and touring as ELP in our own right. It was also unfair on the other acts we had signed as we simply didn't have the time to devote to the proper promotion of their albums. As a result, Manticore lasted only a few years, but in that time some wonderful music was released by the label".

The final album released on the Manticore imprint was the album "Jet Lag" by PFM, issued in the early months of 1977. By now, the Punk rock explosion had begun and groups such as Emerson Lake and Palmer were the target of Punk's protagonists. Although lasting a little over three years. Manticore Records released a body of music that now bears much worthy reappraisal. The passage of time has been kinder to the music of the acts signed to the label.

This compilation gathers together the tracks from both albums Thee Image recorded for Manticore and is a fine collection of sophisticated rock music by three talented musicians.
by Mark Powell 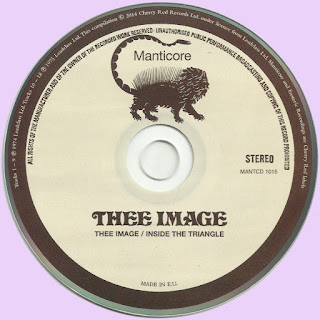 Free Text
Text Host
Posted by Marios at 8:41 AM 7 comments: