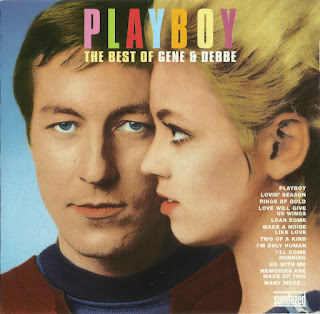 Gene Thomas and Debbe Neville were a fresh-scrubbed pop duo from Nashville, TN, who sounded something like a twangier Sonny & Cher, or as if Nancy Sinatra and Lee Hazlewood had been stripped of their eccentricities (particularly Hazlewood's tumescent ego). Gene & Debbe's sole Top 20 hit was "Playboy" in 1968, and this collection from Sundazed features that tune as well as 21 other sides from the short-lived duo. While these songs were obviously aimed for the pop charts, there's no avoiding the fact this stuff was recorded in Nashville (and released on TRX Records, an offshoot of the powerful Acuff-Rose publishing concern) -- the keening pedal steel on "Torch I Carry," the banjo on "Lovin' Season," and the cheatin' song ethos of "Rings of Gold" all point to the act's Music City heritage, and producer Don Gant (who later recorded with the Neon Philharmonic) was clearly shooting for lots of charm rather than a significant share of hipness (as if the presence of a Dean Martin cover wouldn't make that obvious).

Still, Thomas and Neville sang well together, and the former brought some good songs to the table, especially the Dylanesque "The Sun Won't Shine Again" and the heartfelt "I'll Come Running." Playboy: The Best of Gene & Debbie collects everything they released during their two-year lifespan along with four songs that have never been heard before, and frankly this is more Gene & Debbe than anyone but an obsessed fan would want to own. But if you want to hear Gene & Debbe, this is clearly the place to go, and the typically excellent remastering and packaging from Sundazed show this material more respect than they'd likely receive from anyone else.
by Mark Deming 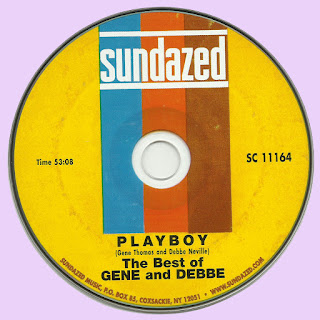 Free Text
the Free Text
Posted by Marios at 7:40 AM 4 comments: