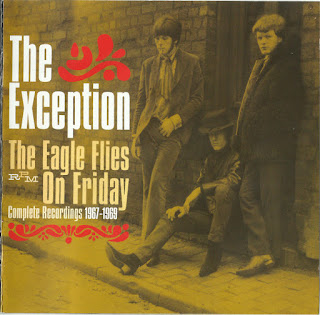 In the beginning, there were 'The Brumbeats' of whom drummer Alan "Bugsy" Eastwood and guitarist Roger Hill were part of the line-up. The group recorded for Decca Records in 1964 which included an album of Beatles covers under the name 'The Merseyboys'. Alan and Roger later teamed up in 'The Hooties' who with the addition of bass guitarist Dave Pegg, became 'The Exceptions' after signing to Eddie Kassner's President Records label.

The Exception was to have no less than seven innovative singles issued on the CBS and President Records labels respectively which in itself is an "exception" considering the "Three strikes and you're out" rule seemed to prevail at most record companies in those days. Unfortunately, none of the Exceptions' records impacted the charts although the band had plenty of 'live' work including a number of German tours where in that country they seemed to gather the most support.

No less than 26 tracks are included on this wonderfully produced CD comprising all the band's singles (A and B sides), their 1969 album, plus an additional five previously unreleased recordings issued here for the first time. The CD packaging is attractively designed by Andy Morten and packaged in its own jewel case. This also holds a 16 page book full of rare photos, recording details, and project co-ordinator John Reed's definitive story of the band including quotes from surviving members.

Thanks to sound engineers Simon Murphy and Mark Stratford, the re-mastered audio quality is excellent - especially on the album tracks. The first 14 recordings on this CD consist of the A and B sides of the band's seven singles issued between 1967 and 1969. Possibly the best known of these is their first titled 'The Eagle Flies On Friday' (issued at the time as 'The Exceptions').

This drums and vibes-driven track was inspired by an American expression relating to the eagle on their dollar bill with lyrics about an employee's weekend escape from his oppressive boss after getting his pay on Friday. Alan Eastwood's lead vocal is certainly very American influenced in this respect, although for this one, the song may have more in common with Eddie Cochrane's 'Summertime Blues'. In addition, Roger Hill contributes a cutting guitar solo while future Led Zeppelin star Robert Plant (who hitched a ride down to London with the band), plays tambourine!

The band's first single for President Records (with new bass guitarist John Rowlands) is a bizzare song titled 'Rub It Down' that could easily be taken for a comedy/novelty number. The song is recorded in a highly-danceable ska/reggae arrangement complete with Bugsy's lead vocal imitation of a West Indian accent! While another Brum band Locomotive led by Norman Haines recorded successful ska impersonations such as 'Rudi's In Love', who knows what direction The Exception may have followed had Rub It Down been a hit!

New band members; bass guitarist Malcolm Garner and saxophonist/pianist Steve Yetson, were on board for The Exception's next A-side which is the Chicago style blues-driven 'Tailor Made Babe' featuring a great piano introduction. This one obviously suited the band's style and probably sounded great when performed live. There's a good guitar solo in there too. You'd have a tougher time dancing to the barely two-minute long B-side titled 'Turn Over The Soil' with it's blasts of harmonica and raunchy lead vocal.

The CD includes five previously-unreleased recordings by The Exception. 'When Your Luck Is Down' is a characteristic blues-pounding walkabout that would have fitted well in their stage show. 'When You Have A Good Gal' with its sparse instrumentation and heart-felt lyrics would not have seemed out of place on Bugsy's solo album. 'These Women Funny' is a driving rocker sounding more like a live recording than a studio production. The group vocal backing and rather vintage-sounding guitar gives it a real mid-1960s vibe.

'Bach Theme' is a jazzy instrumental workout featuring expertly-played saxophone and trumpet presumably by Steve Yetson. Blending along with Roger Hill's lead, it's not difficult to see why the latter would later choose a career as a jazz guitarist. The final unreleased recording (also an instrumental) titled 'Abdel Do Do' sounds like it was recorded live and mostly improvised (which it probably was). Again, saxophone features prominently with everyone getting a chance to take the lead and do their bit. There's a great climactic ending too which makes it a good choice for the last track on this CD.

While studying these recordings by The Exception, it becomes more clear to me that they were certainly no 'pop group' but a hard-working blues-based band in which their major strength was in live performance. I'm sure those lucky enough to have experienced them on-stage would agree. Had they continued, recognition may have eventually came their way but with the absence of a hit single taking them to the next level it was unfortunately not to be.
by John R Woodhouse 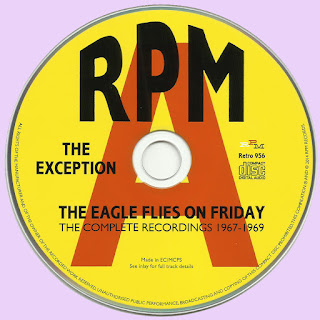 Free Text
the Free Text
Posted by Marios at 3:10 AM 7 comments: