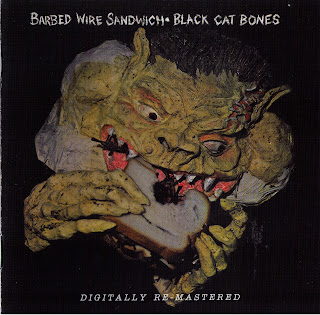 The right place at the wrong time. That could be the epitaph on the gravestone of Black Cat Bones. Having acted as unofficial house band for a number of visiting US artists during the British Blues Boom of the mid to late Sixties, and survived a potentially fatal line-up change into the bargain, they finally made it to vinyl rather late in the day. This, their first and only album, reached the racks in the last months of the Sixties, just as progressive rock was in the ascendancy.

Such imperfect timing may have adversely affected their chances of commercial success and consequently their number of column inches in the history of popular music, but in no way diminishes the excellence of this disc - now available again a full quarter-century after release.

That Black Cat Bones remains a known name is due to two musicians whose names remain stubbornly absent from the credits. Celebrated guitarist Paul Kossoff would go on to superstar status as a founder member of Free, but started his musical career in earnest in these ranks. And though neither he nor drummer Simon Kirke appear here, Koss's featured replacement is Rod Price, a player of no mean ability who would later take his axe-wielding skills to Stateside fame and fortune with Foghat.

But let's backtrack now to the events that led up to November 1969, when "Barbed Wire Sandwich", was released on Decca's 'progressive' Nova label. Though retaining semi-professional status for some time, Black Cat Bones had enough going for them to catch the eye of legendary blues producer Mike Vernon. His patronage brought them their first recording session, backing Champion Jack Dupree for a Blue Horizon album, 'When You Feel The Feeling You Was Feeling'; meanwhile, they made a reputation in their own right touring Germany and Scandinavia.

The music kicks off with 'Chauffeur', - a dead ringer in both pace and chord sequence for Free's 'Walk In My Shadow', from their debut, released mere months before. And the well-worn blues metaphor of riding, (Free rode ponies, Black Cat Bones a car - such is progress) indicates the overtly sexual inclinations both shared. Elsewhere, there's a welcome touch of acousticity (on 'Four Women') to leaven the mixture - owners of well-worn originals will thank heavens for the non-clicky CD! - but overall, the album very much reflected the electric blues of the stage set, as you'd expect from a band that played live so often.

It was left to producer David Hitchcock, who later guided the careers of Caravan, Camel, Genesis (circa 'Foxtrot') and more, to supply the studio expertise they needed to give "Barbed Wire Sandwich", that touch of the unexpected. 'Please Tell Me Baby' stands out in this respect, the band fading in and out around the barrelhouse piano of Robin Sylvester. This would have been impossible live, since BKB's line-up didn't feature keyboards (Sylvester was the sound engineer at Tangerine), so was clearly an attempt to diversify and use the studio to greatest advantage. Steve Milliner lent further ivory-tickling skills to 'Feelin' Good'. And, don't forget, Free eventually added the keyboard talents of John 'Rabbit' Bundrick to give them a route to progress.

Talking of progression, the middle section of 'Save My Love For You', along with other dramatic mood and/or tempo changes throughout the album, suggests that the growth of progressive rock had not passed them by. Rod Price was quite different in approach to Kossoff, his fast, fluid style contrasting with the howling sustain of his predecessor - but he was clearly no slouch either, as he proved on the final track. The self-penned 'Good Lookin' Woman' is the one song on which Price tackled lead vocal. More importantly, it's a guitar tour-de-force, fading out prematurely and leaving the listener wondering exactly what would have happened next.

Leaving the audience wanting more was just one of the lessons learned on the boards, so it's hardly surprising that those who saw BKB live retain approving memories. One such spectator was Stuart Booth, now a publisher, who caught a show at London's Marquee Club as the album was readied for release. 'They were a good live band who missed the boat', he recalls. 'The album came out long after other British blues bands had sunk without a trace, so no one was interested. I was pleasantly surprised to see people still playing that sort of thing. I thought it would all come around again - and, of course, it did…!'

Many years after witnessing Black Cat Bones at the Marquee, Booth had the pleasure of publishing 'Blues - The British Connection', a definitive rundown of the scene by one Bob Brunning (to be reissued by Blandford as 'Blues In Britain: The History 1960s-1990s' in February 1995). Brunning, as blues scholars may recall, was the original bass player with Fleetwood Mac, the man who deputized for John McVie until he could secure his release from John Mayall's Bluesbreakers.

He enters the Black Cat Bones story, albeit tangentially, at this point - because when the album flopped and the band threatened to fall apart, it was a couple of renegades from the Brunning Sunflower Blues Band, Pete French and Mick Halls, who were drafted in to make up the numbers after Price, Short and Lenoir left the ranks. (Short, incidentally, cut a hard-to-find solo album, 'Anything For A Laugh', for Transatlantic in 1971). With a new drummer, Black Cat Bones metamorphosed into Leaf Hound, Zeppelin-esque heavy rockers who, like their predecessors, produced one excellent album before disbanding.

So there endeth the story of Black Cat Bones, a band whose mere footnote in the annals of British rock seems a mite ungenerous, given their musical legacy. Even Bob Brunning only rated them a couple of sentences - but as 'Barbed Wire Sandwich', will prove, music often speaks louder than words.
by Mick St. Michael 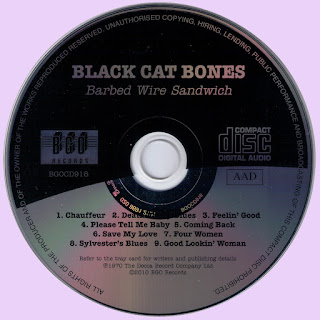