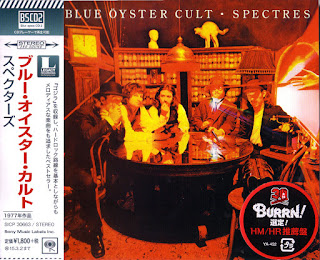 Often looked at as the least attractive and least talented younger sibling to the monster Agents of Fortune, 1977's Spectres is actually quite strong on its own and holds up pretty well next to that breakthrough album. As SONY Legacy is slowly making their way through the catalog, this remaster is quite nice and a long time coming. All the original album cuts sound great, and there are four bonus tracks included, all songs recorded at the same sessions, and appearing here for the first time.

Making your way through this release, there really are a lot of intelligent, catchy, heavy rock tunes, some dripping with a dash of proggy atmosphere & texture, a little dose of "metal" here and there, but for the most part just very good rock music. Sure, the thing kicks off with the infamous "Godzilla", a snarling heavy rock beast that reminded fans that they could easily melt the speakers alongside Black Sabbath and Ted Nugent anyday. However, let's not forget the brash "Golden Age of Leather", or the super melodic "Death Valley Nights", complete with searing guitar licks from Donald 'Buck Dharma' Roeser. Spirited funk rock track "Searchin' For Celine" and the meditative rocker "Fireworks" both show the writing talents of Allen Lanier and Albert Bouchard, and the Eric Bloom/Ian Hunter penned "Goin' Through the Motions" is a great rock radio tune that surprisingly wasn't a smash hit. The heavy rocker "R.U. Ready 2 Rock" became a live favorite, and features crisp riffs from Buck and honky tonk piano from Lanier. "Celestial The Queen" is a grand & majestic tune that relies heavily on layers of vocals and Lanier's keyboard work. The last two tracks are quite interesting; "I Love the Night" is a tender piece written by Roeser, featuring his melodic vocals and an emotional guitar solo, while "Nosferatu" is a dark and mysterious piece about vampires, and comes pretty close to prog rock.

The bonus tracks are a mixed bag, but will be of great interest to fans. "Night Flyer" is a poppy rocker, "Dial M for Murder" features some snarling guitar work, an angry vocal from Bloom, and raging Hammond from Lanier, but "Please Hold" is pretty awful. The band's take on the Ronettes classic "Be My Baby" is suprisingly good, if a bit odd. After hearing these four songs, you'll realize why they were left off of Spectres, but it's great having them here so you can take in the entire session in one listen. Overall, this album might not be the immediate classic that Secret Treaties, Agents of Fortune, or Tyranny and Mutation are, but it comes close.
by Pete Pardo

The music is clean and precisely heard.  The shouted parts in “Godzilla” are easily discernable while the clarity of the music is excellent.  This is true throughout Spectres, which should please fans.  The expanded parts of Spectres contain 4 bonus tracks recorded during the Spectre sessions but not used.The bonus cuts are easily discernible as having been from these sessions however, it’s also clear why they were left off.  They are fun tracks and their inclusion here is worthy as it shows us a process of selection.  These tracks feel out of place with the overall theme of the album but regardless add value to this new package.  “Please Hold,” the third bonus cut is a mid-‘60s Stones-like song that holds well.  The final bonus track, “Be My Baby” is a cover of The Ronettes’ popular, “Be My Baby” and is actually a very good cover at that, if not a curiosity, and an oft-traded BOC track - it reminds of the use of “Loco-Motion” by Grand Funk Railroad. 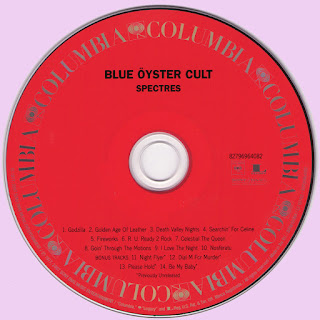 Free Text
Text Host
Posted by Marios at 11:10 AM 2 comments: