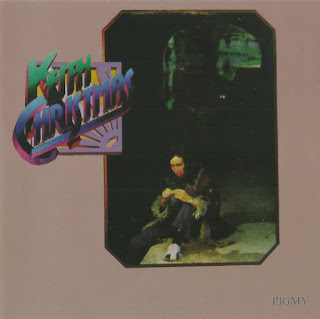 Acid Folk is one of those musicological genre headings that had to be invented retrospectively because it didn’t exist when the music it describes was extant in the late sixties. These days it’s taken to cover the acoustic singer-songwriter individuals and combos who sprang from Dylan-inspired folk-pop roots, picked up psychedelic overtones and morphed into the complexity of prog-rock – which satisfyingly describes Keith Christmas’s most creative period, up to and including Pigmy.

Originally an Essex lad, Christmas was an undergrad at Bath University (coincidentally my own alma mater at around the same time, though we never met) where he studied Building Technology in between extensive gigging on the vibrant London and Bristol folk club circuits. Never a true folkie but certainly influenced by the likes of Bert Jansch and John Rembourn, he combined an enviable fingerstyle technique on an unfashionable but strident Fender Palomino with hippie bedsitter lyricism and a reedy but distinctive voice, a combination also evident in the work of his contemporaries Nick Drake and Al Stewart. The schizophrenic nature of Keith’s career at this time – recording with session musicians but invariably gigging solo – is mirrored in the three albums he cut between 1969 and 1971, these setting his formidable acoustic guitar work alternately against orchestral ensembles and jazzy rock band backings.

Christmas has disowned his first album, 1969’s vaguely country-rock Stimulus, recorded with musicians from Mighty Baby and pedal steelist Gordon Huntley, as “overproduced”; I’d say it was rather a venture in an unsuitable musical direction for the man. He hit his stride eighteen months later with the second, Fable Of The Wings, recorded with session musicians with folk-rock credentials, which subsequently established the folk-baroque-prog template for which he’s best remembered today. There’s little to choose quality-wise between this and the ensuing Pigmy, which for me just has the edge, offering immaculate, restrained orchestral arrangements by Robert Kirby (who did the same for Nick Drake) and the LSO on its first side of introspective ballads, notably the earnest but cerebral “Timeless And Strange”, and powerful keyboards from Rod Argent and bass from Fuzzy Samuels on the other side’s trio of extended classy rockers, culminating in the extraordinary “Forest And The Shore” with its swelling, Ligeti-like choral interludes. Keith’s acoustic shimmers like a harpsichord on the top side, and his ferocious acoustic rhythm work on the flip is leavened with some fluid electric soloing. The album artwork shows him appropriately framed by a Narnia-like background, wispily-bearded, Afghan-coated and apparently rolling a joint, the true zeitgeist of the period.

Although critically his best-received works, neither Fable nor Pigmy sold in droves at the time, and after an even less successful move in a rock/soul direction Christmas threw in the professional music business. While his contemporaries Al Stewart and Nick Drake had gone on to contrasting fates – one to superstardom in LA, the other to clinical depression and an untimely death – Keith became a renovator of old houses and eventually a schoolteacher, settling in a pleasant village near Bristol and making music for his own pleasure, issuing privately-recorded small-circulation albums at intervals and occasionally gigging local pubs and small venues, his acoustic guitar mastery undiminished. Stimulus has been bootlegged for CD, but Fable and Pigmy remain unreissued and are now great rarities on vinyl; however, almost their entire contents are available on the excellent Castle compilation CD Timeless And Strange, whose title encapsulates his music of that period and which is available direct from Keith himself at his website.
by Len Liechti 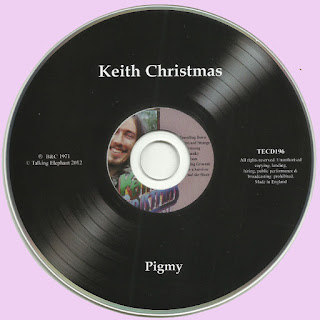 Free Text
Text Host
Posted by Marios at 11:28 AM 5 comments: