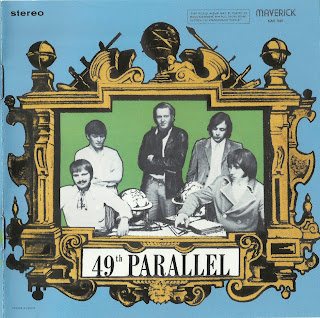 Calgary's torch bearers in the great sixties garage punk sweepstakes were the 49th Parallel, whose 1969 chart success 'Twilight Woman' garnered them a few deserved rays of limelight. Unfortunately, plagued by personnel changes since their inception in 1966 (as the Shades of Blond), the lads were unable to capitalize on their minor hit, and by 1970, not long after the release of this self-titled LP, had decided to pack it in.

Starting off as a six-piece, the Shades of Blond landed a record deal with Ontario-based RCA subsidiary Gaiety Records, re-christened themselves the 49th Parallel and released a couple of mildly successful forty-fives, the spry 'Labourer' (RCA 3428) and the sunshine pop of 'She Says' (RCA 3447). A switch to the Venture label in 1968 saw more success with the curious 'Blue Bonnie Blue' b/w 'Missouri' (the former penned by a then unknown Delaney Bramlett about his equally obscure muse, Bonnie).

At this point keyboardist Dave Petch left to be replaced first by Alf Cook and then by Dennis Mundy, with bassist Mick Woodhouse yielding to Dave Downy. By the time of their second Venture seven-incher, the radio-friendly pop-rocker 'Twilight Woman', the band's fortunes seemed to be lifting with some chart activity south of the border. With MGM affiliate Maverick agreeing to handle US distribution, the band recorded their sole full-lengther The 49th Parallel, an oddly schizophrenic mix of sunshine pop, Anglo lysergia and the gruffer acid-rock sounds of the era.

The gentlest and ultimately most successful tracks on The 49th Parallel were written by a mysterious D. Hockett, like the blithe and sugary opener 'Now That I'm a Man', with shades of Curt Boetcher at work in the summery orchestration, or the blurry Tomorrow-esque psych of 'Lazerabder Filchy'. The lysergic 'Missouri' showcases a breezy farfisa that sallies along behind a more caustic - and at times intrusive - guitar solo. Add to these the soulful AM fare of 'Twilight Woman'. Unfortunately, these tracks lie buried somewhat amidst some rather hefty acid-rock riffs. The record heats up on these tougher tracks when driven by Danny Lowe's caustic guitar or, especially, Mundy's abrasive Hammond B-3 licks (as on 'People') but often founders when the machismo is left unchecked.

The disparate The 49th Parallel often comes off more like a cobbled-together collection of singles than a unified album - hardly a surprise given the cachet of LPs back in the days of free-form radio.
by Michael Panontin 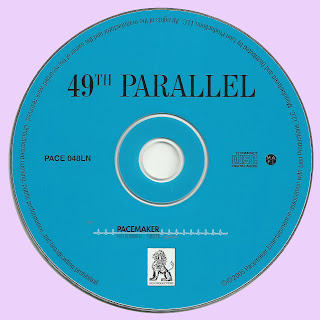