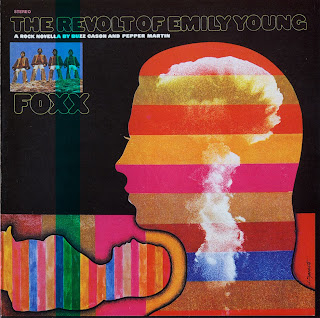 By the late-1960s Buzz Cason was quite a powerhouse in the music industry. He'd been a founding member of Nashville's The Casuals, recorded as a member of The Statues, and enjoyed solo success under the pseudonym 'Garry Miles'.

Together with Bobby Russell he was a prolific writer, ran a publishing company (Russell-Cason Music) and headed a record company (Rising Sons). He also enjoyed success as a back up singer, and as the owner and operator of Creative Workshop recording studios. Against that backdrop Cason further stretched his horizons via 1970's "The Revolt of Emily Young A Rock Novella By Buzz Cason and Pepper Martin."

A concept album co-written by singer/guitarist Pepper Martin, the collection was produced by Cason and credited to the studio band Foxx (consisting of bassist Butch Bourque, former Livin' End drummer Little Joe Martin, singer/rhythm guitarist Martin, and well known studio pro Al Perkins on lead guitar). This is one of those early-197s albums that's been largely lost to audiences. Judging by the number of reviews you'll find, it's even escaped notice from hardcore collectors with the few on-line reviews tending to be brief and somewhat critical.

That's unfortunate since the set was actually quite enjoyable and innovative in its own way.. Yeah, it was clearly a product of a certain timeframe and parts of the set haven't aged all that well (other than wine, few things do), but it's one of those albums that grows on you the more you listen to it. Like many concept pieces, the plotline to this one was a little vague to my ears, but seemed to follow the birth, childhood, and brief life of namesake Emily Young (along with her impact on family and friends). Songs got you from birth through early adulthood where Emily left home in order to hitchhike across the country.

Following Emily's spiritual search ('Opus Epyllion (The Age Of Light)'), downfall ('Flight Termination'), and death ('Just Another Village Incident'). Kind of a bummer ending ... Still, musically the set was quite good. Pepper had one of those chameleon-like voices that was equally at home on country-tinged material ('Into Something Real'), hard rock ('Rock Jock Bobby Sloan'), pop (the Beach Boys-styled harmony rich 'Rebecca's Prayer'), and even sunshine psych flourishes ('Sunshine Children').

Though never a flashy player, Perkins turned in nice leads when required - check out his solo on 'Flight Termination'. All-in-all quite enjoyable and something that sunshine pop fans would certainly clamor to hear. Even better, it's still quite affordable.
Bad-Cat 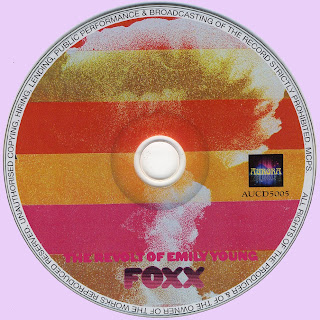 Free Text
Just Paste
Posted by Marios at 4:18 AM 5 comments: