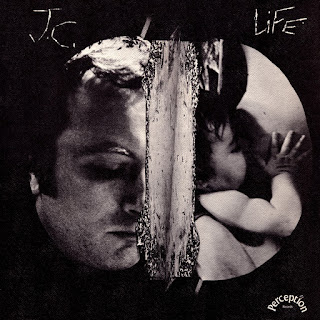 Jimmy Curtiss was born and raised in Queens, New York, the first time he appears as a member of a doo wop outfit The Enjays, who released three 7"45s around 1959/60. In the following year J.C.'s first solo single appeared on United Artists. Teen pop you'd call this innocent, clear, very melody oriented phase in US mainstream pop. Bobby Vee, Bobby Darin, Dion & The Belmonts were it's main exponents. I know of at least three singles Jimmy Curtiss released during this period of his career around 1961/62. His voice is already unmistakeable. Already then he wrote or co-wrote most of his material. "Five Smooth Stones" for example is a nice and highly original version of the Bible's tale of David and Goliath. According to Vernon Joynson (in "Fuzz, Acid & Flowers") he was a "phenomenal songwriter ... throughout", who even sold songs to Bobby Darin and Ellie Greenwich.

Between 1967 and 1969 Jimmy Curtiss worked with a group called The Hobbits in New York. This was presumably more a studio project than a performing live band. Despite the band's name, apparently taken from the universe of Middle Earth, which was very popular in hippie circles at the time, Tolkien's creatures never appear in the songs of The Hobbits, even though the first album is called "Down To Middle Earth" and the last "Back From Middle Earth". There are three LPs and two singles by the Hobbits.

In 1968 Jimmy Curtiss founded his own production company Perception. Ever since he produced bands and/or wrote songs for them. A 7"45 "Artificial Rose" by the Lost Souls from North Dakota appeared in 1968 on a tiny label called Dawn Records. The song was co-written by Mr. Curtiss and his old partner Ernie Maresca. Two examples for a pure bubblegum period in Jimmy C.'s career are the singles "Love, Anyway You Want It" by The Sweet Bippies (ca. 1969) and "Da-Da-Da-Da", The Changing Colours (ca. 1969). Can't tell you anything more about these bands. In 1968/69 J.C. also produced three singles and an album by the New York group The Bag, who self described their music as "psychedelic soul".

The band came from the same New York based blue-eyed soul scene as The (Young) Rascals or The Soul Survivors. Through his younger brother I got in touch with Dan Mahony, formerly of The Bag, in the summer of 2003. Unfortunately Dan couldn't tell anything really new. As it seems he doesn't remember things very well. After a few e-mails to and fro I didn't hear from him again. But obviously he and the other guys in The Bag were also involved in the recording of the New Hobbits album. Dan is living in Ireland now, and it seems he's still working as a musician. The Bag album "Real" contains several really well crafted soul pop and polished r&b songs with a touch of psychedelia.

Almost at the same time Jimmy Curtiss and one Steve Kanyon produced the only album by a New York psychedelic folk/rock group called Velvet Night. Besides strangely arranged cover versions of two Tim Hardin and a Donovan song, plus a Cream medley, there are songs written by Curtiss and Kanyon plus one credited to the band's organ player Vinnie Nisi. The record has a rather weird US underground psychedelic sound. Donovan's "Season Of The Witch" certainly comes less menacing than Vanilla Fudge's version, but still much heavier than the original. The Cream medley is rather strange. And Tim Hardin's "If I Were A Carpenter" sounds spherically esoteric. When Lynn Boccumini sings lead vocals, the band even sounds a bit like Jefferson Airplane. Of substantial interest are only the songs we do not know already in other and better interpretations. Again it becomes clear, that Jimmy Curtiss was able to sense atmosphere and specifics of a musical style in a unique way. As a songwriter he wasn't bad either as we do know already.

And the man always found a way to include his own compositions on the records he produced for others. So he did with The Jon Bartel Thing, a band from California, whose lone album was released by Capitol Records in 1969. A great record full of brass dominated, jazz influenced psychedelic pop. Co-producer here was Terry Philips, who worked on many projects of Mr. Curtiss. This album by The Jon Bartel Thing reminds me in some ways a lot of the first Blood, Sweat & Tears LP. An interesting fact by the way, J.C.'s partners Terry Philips and Jerry Vance used to write songs together with Lou Reed for the Pickwick company in the early sixties. "Why Don't You Smile Now" was one of these.

J.C. - LifeIn 1969 Perception Productions turned into Perception Records. Now Mr. Curtiss had his own record label. The New Hobbits LP bears the catalogue number PLP-10. But with the number PLP-1 appeared - probably a bit later - the Jimmy Curtiss solo album "Life". I'm not sure about the year of release. There's no date on the cover or record. Though most likely it came out in 1969 still. On this record J.C. is miles away from the early doo wop 7"45s but also from the Hobbits' psych pop or from "Psychedelic Situation" for that matter. Folk, singer/songwriter pop, blues in nine songs. All of them written by Jimmy Curtiss alone or in co-operation with people like Marcia Hillman, who was a co-writer for The Hobbits already.

The album's opener "Child Of Clay" had been a US TOP 40 hit for Jimmie Rodgers in 1967. This was J.C.'s biggest success as a songwriter. Unusual were the mostly critical and serious lyrics. Really thrilling sometimes. The musical arrangements with wah wah sounds, with strings set rather economically grab one's attention.  Perception LogoThe album cover is really anti commercial sporting a primitive black & white photo layout. It's message rather unclear. The meaning of life? - Whatever. Jimmy Curtiss' backing band made another album for Perception under the name of Albert. Drummer Howie Wyeth worked as a session musician for Bob Dylan and others. Together with the album "Life" there appeared a J.C. single on Perception.
from Twang-Bang 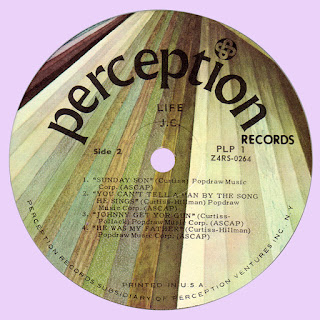 Free Text
the Free Text
Posted by Marios at 11:07 AM 5 comments: